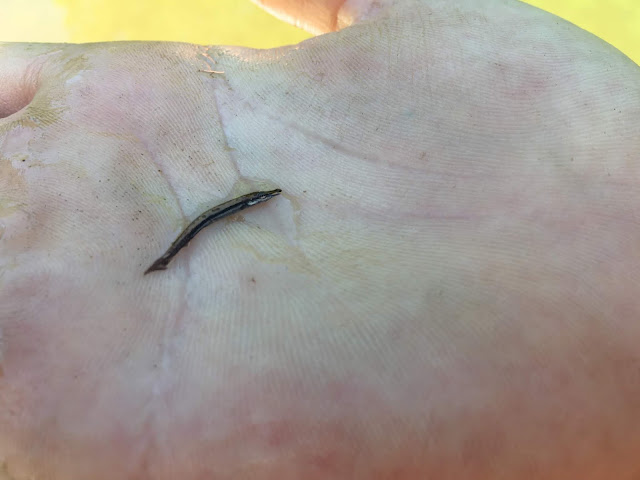 I received this picture from Holly Welch. Her family was fishing in the Pomme de Terre River, catching freshwater drum, redhorse sucker, channel catfish, multiple bluegill, green sunfish and longear sunfish. The most interesting catch of the day came when her son Caleb started trying to catch little minnows in his hands. He was successful, but it turns out the catch above was not a minnow at all. Even though it was just an inch long, they recognized that it was a longnose gar. 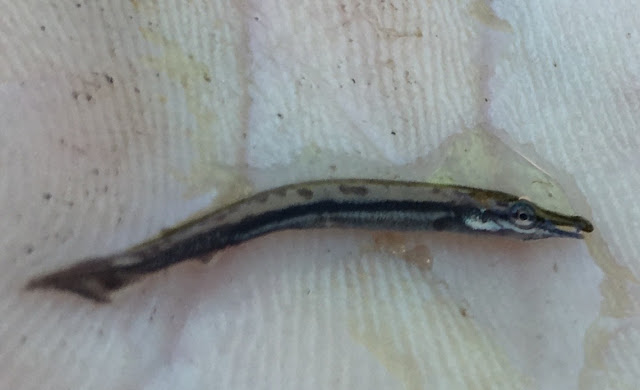 The longnose gar, Lepisosteusosseus osseus, can live from 11 to 20 years with females living significantly longer than males. They are also called needlenose gar and the tip of the nose is smaller than the diameter of their eye.  The largest gar in Missouri grow to be 5 feet, although it is much more common to find gar in the 3 feet range.

Females hold an average clutch size of about 27,000 eggs. The eggs have a toxic, adhesive coating to help them stick to substrates, and they are deposited onto stones in shallow water, rocky shelves, vegetation, or even smallmouth bass nests.  A study done in Missouri showed that their eggs are very toxic to terrestrial vertebrates, but other fish could tolerate the toxins.  Newly hatched young have an adhesive disc by which they attach to submerged substrate. Young feed on zooplankton until they are 1 to 2 inches in length after which time they feed mostly on other fish, and an occasional crayfish and insect. 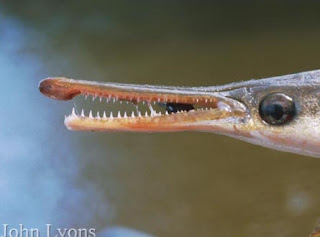 Widely distributed in Missouri, they are found in nearly every major stream and impoundment in the state. Typically they inhabit sluggish pools and backwaters of streams and deeper, open-water areas of lakes. They feed by laying motionless in the water until a fish passes, then use their long toothy jaws to quickly snap onto their prey.


"Longnose gar were a main source of food for Native Americans and early colonists. The first settlers at Jamestown, Virginia, dined on this fish through their harsh early years.  Today, gar is more of sport fish, but their meat is surprisingly tasty." Wikipedia


They are listed as a non-game fish in Missouri. This means there are no seasons or limits and they can be taken by hook and line, snagging, gigging or even by atlatl! Generally they are of no economic importance although there has been a commercial fishery for gar in Arkansas (hold the jokes please). Gar skins have been used for purses and other coverings. Their hard rhomboid scales take on a fine polish and were used by Native Americans for arrow points and decoration. Now they are primarily taken for sport.

More details on longnose gar are at Animaldiversity.org
Posted by Bob and Barb at 7:22 PM