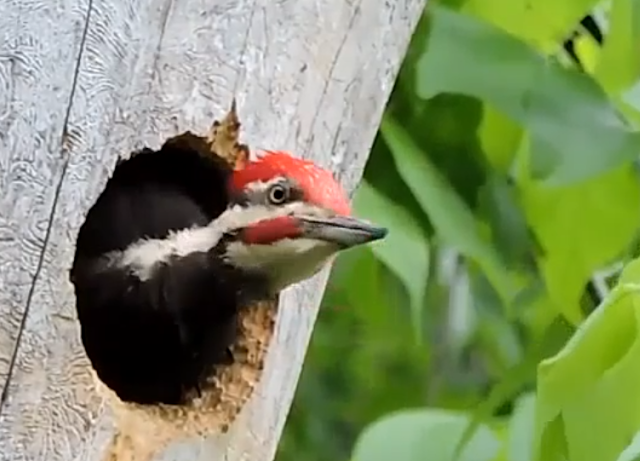 We recently wrote in this blog about a pileated woodpecker (PW) nest along Bull Creek.  Since then we have had a lot more action and I have condensed 12 hours of videos into an action-packed 4:51 minute video.  Although their clutch size is usually 3-5 eggs, I had only spotted two at a time at the hole.  Then Becky Swearingen captured the picture below. 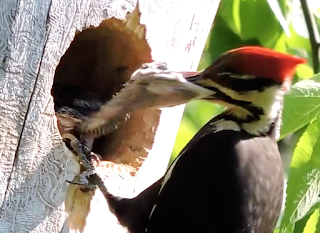 First though, a little about PW child rearing techniques.  Audubon says "Both parents feed nestlings by regurgitation." That's an understatement, like saying Moby Dick is a big fish.  I want to warn you that their feeding techniques are vigorous, verging on child abuse.  Once you get passed seeing the stuffing of the gullet, watch the beak carefully and you can see the parent bringing up fresh food from the back of the mouth with its versatile long tongue.  It then carefully selects which infant gets the next delicious morsel.

I was fascinated watching the parents climb around on the smooth bark-less tree which is leaning back 10 degrees off of perpendicular.  They seem to be hopping but the movement is so fast that you can't see them change their grip.  Notice how observant they are, constantly on guard, looking around in all directions before feeding or climbing into the hole.

Once inside the hole, it spent a considerable time looking out and around and listening for the calls of its mate.  Early on they might remain in the nest for 1-2 hours between shifts.  I was filming them in 28 minute shifts and leaving the camera, because whenever I was present they would never show up or look out.  They are secretive and I suspect will never get used to observers like our black vultures have when we visit their eggs or nestlings.

Now a viewer warning, the last 20 seconds is where things get messier.  PWs are neat freaks like many other nesting birds.  Feces and moist food or trash in nests increases the likelihood of infection and parasites.  Until their young are toilet trained, meaning they can poop out side of the nest, someone has to remove their waste, a job shared by both parents.  Packaging the waste is critical.  They haul it out in "fecal sacs" something that sounds solid but isn't.


"A fecal sac (also spelled faecal sac) is a mucous membrane, generally white or clear with a dark end, that surrounds the feces of some species of nestling birds.  It allows parent birds to more easily remove fecal material from the nest. The nestling usually produces a fecal sac within seconds of being fed; if not, a waiting adult may prod around the youngster's cloaca to stimulate excretion."  Wikipedia

While I don't have any video confirmation, I suspect that young PWs learn toilet training rapidly after looking at the parent's beak and considering that "the adult may prod around the youngster's cloaca to stimulate excretion."

Young leave the nest 26-28 days after hatching and may remain with parents 2-3 months.  We hope to get some pictures of the fledglings before they move out for good.  PWs rarely use the same nest twice and generally nest high up in the forest so this is probably a once in a lifetime opportunity for us.
==========
The video is at this You tube link.
Posted by Bob and Barb at 6:41 PM