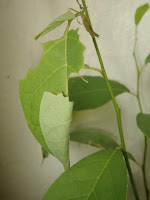 David Middleton* dropped off a pair of little spicebushes, Lindera benzoin, by the front door in Springfield.  Barb was watering them a few days later when she noticed some leaf damage.  Several leaves were folded up, and peeling the leaves apart she found that  spicebush swallowtails (SST) caterpillars had already gotten to them.  This was rather incredible as we had never seen an SST in our neighborhood. Our neighborhood was built in the 1970's with the usual non-native foundation plantings and only lately have we converted our yard to native species, creating a little oasis in a native food desert.

SST are common along Bull Creek where we have lots of spicebush in the valley and wooded hillsides.  Up in the forest where we also have loads of their alternate host plant, sassafras.  This female must have been on the prowl away from the Nature Center a mile away.  This proves once again that "plant it and they will come."

The early instars are darker with white stripes on the first and eighth abdominal segment although this one couldn't count.  This is a variant of the "bird poop" appearance, thought to help the cat hide from predators.  I can't account for the brown lump on the eye spot.  It resembled a mite but was present on both sides.  No other on-line photographs have one. 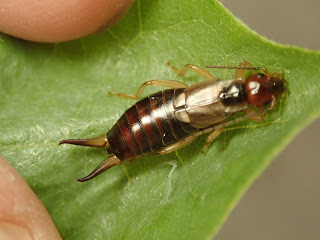 Not every folded leaf will have a caterpillar.  Another leaf on the plant held a common earwig, Forficula auricularia.  This European native first hit North America in 1907.  Like many invasive species it has its good and bad sides.  It is an omnivore that can eat flowers and fruit crops and cause leaf damage.  On the good side, they have been shown to feed on various pests such as aphids, scale insects, psyllids, and midges, and likely would be happy to eat a SST caterpillar. 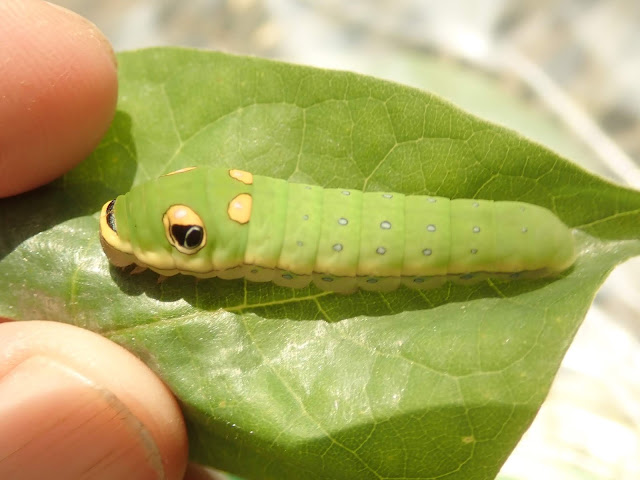 The final spicebush instar starts out green with a prominent eye spot, then turns yellow just before it forms a chrysalis.  It will spin a thread to support it as it hangs on a plant in a position to emerge (eclose), inflate and dry its wings and fly off to find a mate and start the life cycle once again.


*We get some of our native plants from David and Jenny Middleton at OzarkSoul.com.

Visit the Bill Roston Butterfly House at  the Springfield Botanical Gardens where you may get to see SST on the wing.