Springfield is hosting a new species of aggressive Japanese ants.  The scientific name for these invaders is Tetramorium tsuschimae. It’s unlikely any of us could tell one ant species from another, but Dr. Lloyd Morrison can.  He is an ecologist with National Park Service at Wilson’s Creek Battlefield.
Lloyd believes the ant species are being transported in potted plants, where they nest and proliferate like – well ants.
The newly arrived ants were first identified in St. Louis and Columbia. Dr. Morrison found them marching purposefully around in his back yard and used DNA testing to confirm his observations.  These ants are 1/10 of an inch long, polygynous (male mates with more than one female) and prefer warm weather.

In spite of the picture, you and I won't be able to distinguish them from our native species.  Before you declare war on ants, you should know that they do a lot of good in nature or your garden, although they can certainly be annoying pests. Ants are like earthworms; they till the soil and collect insects that they turn into fertilizer. They also attack many seed-eating insects, interrupt their courting and egg-laying. Then again, Lloyd says some ants have a sympathetic relationship with aphids, protecting them from other insects. And carpenter ants are another story.
The best solution: create a barrier, and if you find ants in all the wrong places; destroy their map-making pheromone trail.
You can learn more about insects at www.missouriconservation.org.
Story by George Freeman adapted from the Friends of the Garden Fog Blog
Posted by Bob and Barb at 9:23 AM 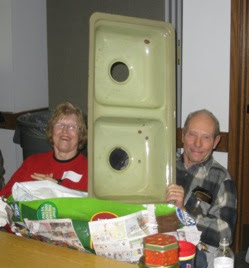 The Springfield Plateau Chapter Christmas Party, as designed by Karolyn Holdren, was a success as measured by the babble of voices and the intake of food.  The Master Naturalist Choir was led by Bob Tosca-ninney Ranney in his Christmas Cantata "The Barber of Jay".  The White Elephant gift exchange had everything including a kitchen sink, and the last minute silent auction raised over $670.

Since plants just grow without feeling or reacting to the environment, it makes sense that they don't mind being eaten... or do they?  Bob Ranney sent me this New York Times Link which makes you think twice about that.
Posted by Bob and Barb at 8:45 AM

The morning after the temperature dropped to 10 degrees on Bull Creek, the edges of the field and roads blossomed with white flowers.  Well, sort of flowers.  Frost flowers are ribbons of ice which split the stems of three types of Missouri wildflowers as the sap freezes.  The spirals may extend more than eight inches up the stem or curl around the base in complex rosettes up to 8" in diameter.  The individual ribbons are so thin that you can see your fingerprint through them.
Our frost flowers form on the stems of White crownbeard (Verbesina virginica), also known as Frostweed.  They can also be found on Yellow Ironweed (Verbesina alternifolia), Hoary Frostweed (Helianthemum bickmellii) and Dittany (Cunila origanoides). 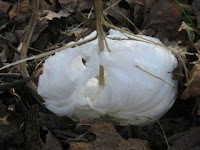 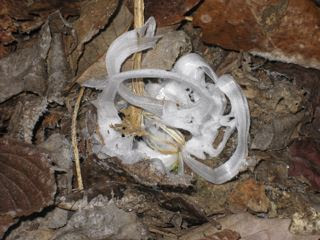 Frost flowers typically are seen with the first hard freeze but may reappear with the second or third freeze as well, typically with smaller displays of ribbons.  Technically they should be called Ice Flowers as they are formed from freezing water rather than freezing water vapor which forms frost.  (For more on this, check out this link
Some of the our frost flowers from Bull Mills as well as their parent wildflowers can be seen by clicking on this from Missouri Conservationist.
Posted by Bob and Barb at 2:55 PM

Nintyseven percent of our planet is under the sea, the vast majority of it never explored.  Although this is currently out of range for a Master Naturalist field trip, there is a lot to learn there.  Recently there have been a number of stories highlighting a variety of new discoveries, such as those described in the article at LiveScience.  Who knew that Dumbo could swim!

If you have six minutes to burn, a great way to spend it is at the site of TED underwater.  The deep water bioluminescence is amazing by itself, but wait until you catch the camouflage of the cephalopods.  Check out the squid behaving as lounge lizards and the amazing disappearing octopus.
Posted by Bob and Barb at 9:31 AM