The sassafras trees are bright yellow this time of year, making it easier to find their distinctive leaves.  Their most distinctive characteristic are their three leaf shapes.  Most leaves are entire but others are one and two fingered mitten shapes as seen to the right.
I have just figured out how to identify sassafras bark.  The ridges are rounded between the deep grooves.  These ridges resemble my fingers if I hold them together with my palm on the tree pointing up.  Just remember the three fingered leaves to remember the bark.  Another hint is to slice off the top layer of bark, which will expose the red-brown color beneath. 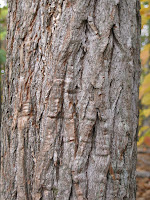 Wikipedia lists the use of sassafras as tea, filé powder for gumbo, and an additive in root beer in the past and microbrew beer.  Sassafras tea or sassafras oil that contain large doses of safrole have been associated with liver cancer in laboratory animals, leading to an FDA ban on sassafras tea.  Sassafras root was one of the earliest new world exports - it was used to perfume soaps and make tea. Native Americans used sassafras trees for dug out canoes.*  White-tailed deer consume the leaves and twigs as do many small mammals.  The fruits are eaten by many bird species.

Most of us think of tea when we hear the word sassafras.  Here is what WebMD has to say about it.

"In beverages and candy, sassafras was used in the past to flavor root beer. It was also used as a tea. But sassafras tea contains a lot of safrole, the chemical in sassafras that makes it poisonous. One cup of tea made with 2.5 grams of sassafras contains about 200 mg of safrole. That equates to a dose of about 3 mg of safrole per 1 kg of body weight.  This is about 4.5 times the dose that researchers think is poisonous. So, in 1976, the US Food and Drug Administration (FDA) ruled that sassafras could no longer be sold as sassafras tea."

Missouriplants.com has a complete set of pictures.
*Vermont EDU
Posted by Bob and Barb at 6:17 AM

An interesting story on Asian Carp is in today's News Leader.  The U.S. Geological Survey's Columbia Environmental Research Center in Columbia, Missouri is studying a pheromone which causes alarm in carp, hoping to use it in selected places to drive carp away.  This would have potential value in breeding areas or in channels such as the Chicago canal to deter carp from moving up stream.


"The researchers have evaluated the effectiveness of using alarm pheromones or "schreckstoff" to control Asian carp.  In experiments, Calfee has taken a live carp and made incisions with a scalpel to simulate the attack of a predator.  She then lets the fish sit in a tub of water for a short time and then extracts the water to release it into the tank.  She said the response is almost immediate: The carp will exhibit heightened swimming in a school formation and attempt to quickly escape."

This is of interest in Missouri where carp are threatening native river species and have caused injuries during jumps out of the water (see this dramatic video).  This invasive species was introduced from eastern Asia into sewage treatment lagoons and for aquaculture.  They are now living freely in 18 states.  If they also get into our lakes they could have a serious impact on crappie and walleye populations.

You can read more at this Link.
Posted by Bob and Barb at 8:45 AM