Suppose you are an animal. Well, actually, you are an animal, but suppose you’re another kind of animal, maybe something small that might make a tasty snack for a larger predator. You’re walking along one day when you see a big dog. What do you do?  Well, depending on what kind of animal you are, you have different options. A skunk can spray a noxious liquid that will repel predators, a cat can make its hair stand on end so that it seems larger than it is, or some animals, such as opossums, may pretend to be dead already.

There’s another strategy all these animals have, though. You’ve seen it before, but maybe never thought about it. They can freeze. This is a way to avoid detection by a predator scanning the scene for motion. It is an instinct built into most mammals and even insects like the humble house fly.

A rabbit's first defense is to freeze when it's frightened. If it thinks it has been spotted, it starts to run. It trades evasion for distance and speed zigzagging right and left in short hops. This makes it hard to follow as any one hunting with a 22 rifle can testify. Just ask a beagle. Either it finds safety, tires and confuses a predator, or ends up as the main course for an owl, bobcat or other lucky winner.

Humans have this instinct hardwired from birth, and that can be good or bad news. An interesting article in the NY Times describes the conflict in our brain when danger such as a shooting suddenly appears.


"One suggestion, promoted by the Federal Bureau of Investigation and Department of Homeland Security, and now widely disseminated, is “run, hide, fight.” The idea is: run if you can; hide if you can’t run; and fight if all else fails. This three-step program appeals to common sense, but whether it makes scientific sense is another question."

It appears that this same conflict occurs in bunnies.  A friend sent me this video of a bunny rabbit with an really baaad attitude.  Rather than "freezing" this usually mild mannered mammal was having a bad hare day and took it out on a black snake.
Posted by Bob and Barb at 3:00 AM 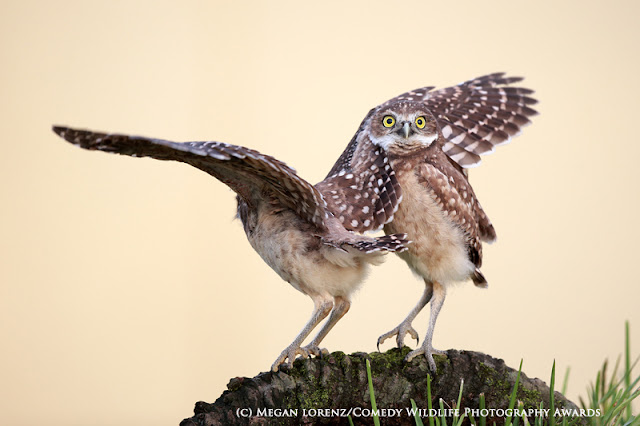 During our Christmas break, here is a reminder that nature can be just plain fun.  Take a quick look at these Comedy Wildlife Photography Awards winners for 2015.
Posted by Bob and Barb at 7:15 AM

An Anna's Hummingbird recently visited Springfield, staying for lunch over several days at Mike and Sarah Gugliotta's feeder. They shared this with GOAS* members who turned out to see this uncommon Missouri bird which is a west coast species, listed as a casual migrant in Missouri. It presumably enjoyed its visit and the Missouri hospitality included giving it a new bracelet. Greg Swick posted a nice set of photographs on Facebook that he shared with us. Anna's Hummingbird** is tiny for a bird but large for a hummer.  It consumes a higher percent of insects in its diet than other hummingbird species.  Its rare appearance in Missouri is usually in late fall, visiting feeders after our Ruby-throated Hummingbirds have migrated.  They have even stayed over winter at a heated feeder. 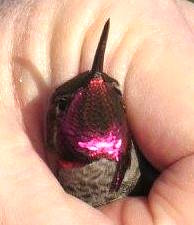 The male's courtship flight is dramatic, climbing 130 feet in the air before swooping to the ground.  The courtship display is accompanied by a loud chirping produced by its tail feathers.  The male can literally change color with a twist of the neck, the head and gorget turning from green to a metallic emerald color in direct sunlight, as seen in this video. 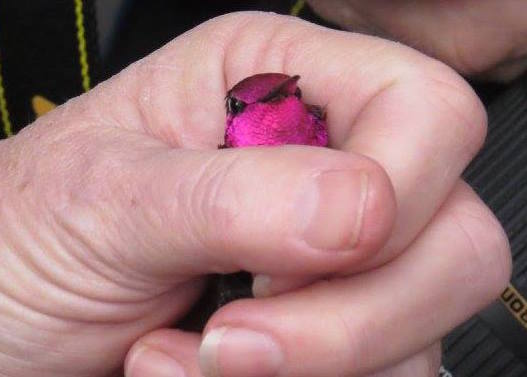 Their original range a hundred years ago was in the evergreen shrubs of coastal California.  Their range has expanded considerably since then, probably due to humans planting gardens and hanging bird feeders.  They are more cold tolerant than other hummingbird species and now are found in British Columbia as well as occasionally in the east.  One factor is their ability to slow their heart rate to 1/15th of its daytime rate which conserves energy and body heat.  Their normal body temperature of 107 degrees Fahrenheit can drop to 48 degrees, then rise again when the temperature rises.

Our visitor got a new bracelet by Sarah Driver, a licensed bird bander.  When a banded bird is encountered later, a toll-free call reporting it gives the bander information on the range and age of the bird and the finder receives a certificate.  "The oldest recorded Anna's Hummingbird was at least 8 years, 2 months old, when it was recaptured and re-released during a banding operation in Arizona."

In addition to advancing science, it will give us a chance to see if it returns to the same location (site fidelity).  Jane Nicholas  from Jackson County in eastern Missouri reported an occurrence on Facebook:


"That's so cool! I have a male Rufous at my house for the second winter. He was banded last year and has been confirmed a couple weeks ago to be the same bird. Good luck with your wonderful bird!"

Consider leaving your feeder up into the fall after the Ruby-throated Hummingbirds have migrated.  If you see activity, you may find your own casual migrant Anna's and Rufous Hummingbird in the off season.

* Photographs by Greg Swick of Greater Ozarks Audubon Society (GOAS).
** The name Anna's comes from Anna Masséna, Duchess of Rivoli (1802–1887) the wife of Francois Victor Massena, 2nd Duke of Rivoli. She became the head of the household of the Empress Eugenie.  It was named by Rene Primevere Lesson, a famous French surgeon and naturalist.  In addition to being the first European to see live birds of paradise, he was smart enough to gain political points by naming this bird after Anna!
Birth of hummingbirds video.
Posted by Bob and Barb at 8:05 PM

STELLA!   The title, of course, is an homage to A Streetcar Named Desire, however, this blog is about eagles and Stella, Missouri. I spent the rainy Sunday of December 13th going to Stella, Missouri, to see if the convocation of eagles had arrived yet. It was still a little early, but I know they will arrive.

My first time to Stella was in 2011 during the annual Eagle Days. The Chert Glades Master Naturalist group participates in the Stella Eagle Days. That is when I took my first decent shot of an eagle as it sat perched in a tree just above my head.  I’ve gone to Stella several times since then, getting more shots of eagles – one of my favorite photographic subjects.
Eagles start gathering in Stella in December of every year. Stella itself has a human population of around 150, but during the winter it may have as many as 400 Bald Eagles in residence. They arrive from the Great Lakes region following flocks of Canada Geese, picking off sick and injured birds.

They stay in Stella partly because it is at the confluence of four watersheds: Indian and Shoal creeks, and Big Sugar and Elk rivers.  The Department of Conservation reports that there are eight active nests in the Stella area, so there is also a nice year round population of birds. In fact, I got to see this juvenile when I was there on December 13th.