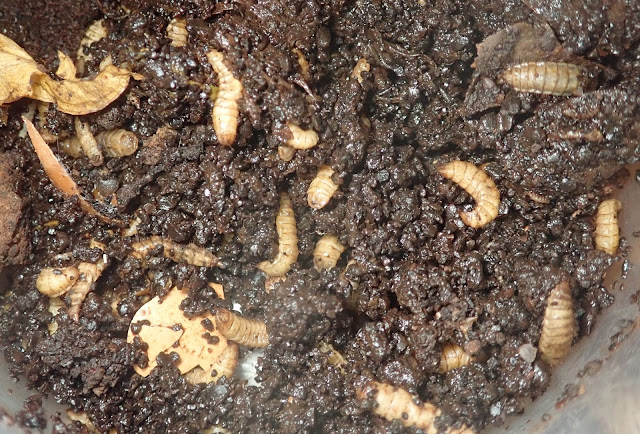 My editor was turning our compost in the backyard bin when she discovered it was full of squiggly creatures.  She identified them as black fly larvae, Hermetia illucens.  While this was a new species to us, it is apparently a very common finding in compost piles that aren't turned frequently.  Not only are they our friends, in many countries they are an industry. 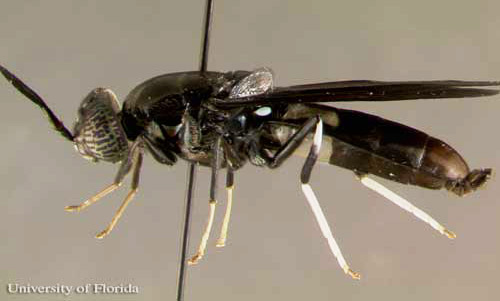 Mating occurs two days after the flies emerge.  The males will have a lekking site where they gather similar to prairie chickens and may attack competing males.  They then fly up to grasp a passing female for copulation.


"The female black soldier fly deposits a mass of about 500 eggs in cracks and crevices near or in decaying matter such as dung, carrion, garbage, and other organic waste. The eggs hatch into larvae in about four days. Each oval shaped egg is about 1 mm in length." UFL Entomology

The larva is a pale off white color with a small projecting head equipped with efficient chewing mouth parts.  The larva will gorge constantly over two weeks, splitting out of its skin six times.  The final instar is up to an inch long. When ready to pupate, it will climb out of the moist pile of  manure or decaying matter to find a dry surface.  There the skin (exoskeleton) darkens and a pupa develops within.  Inside it transforms into the fly over two weeks before emerging to repeat the cycle.


A very low tech operation can raise livestock food as well as convert animal and vegetation waste into a usable resource.  This 4 minute video shows the full process as done in Malaysia, producing both compost and livestock food seen at the right. One ton of organic waste is converted into over 400 pounds of compost plus 400 pounds of larvae for poultry.  Now that is a lot of chicken food!


This University of Florida Entomology website has a very thorough description of the fly and its life cycle as well as photos of the stages. 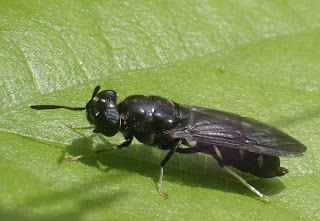 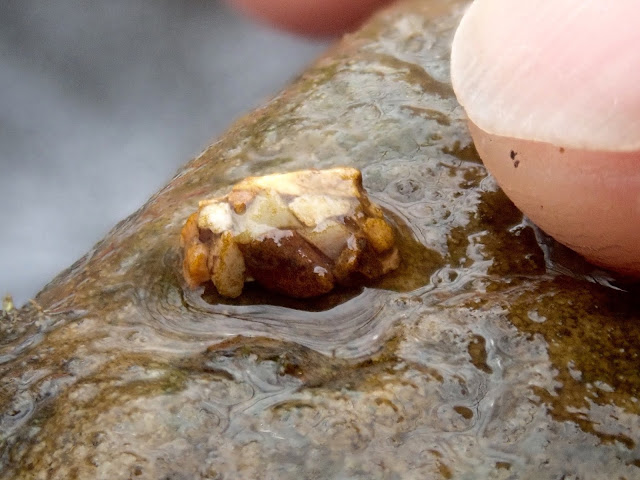 Mark Bower showed his latest find from the bed of the little wet weather first order stream beside the cabin.  These were clusters of fine gravel, glued together like caddisfly cases but in tiny rounded ovals.  The stream flows for a day or two after a rain, trickles along in places before becoming a losing stream, disappearing several hundred yards from Bull Creek.

I didn't think this tiny stream could support caddisfly larvae.  Wrong!  Deb Finn immediately identified the photographs as cases of the caddisfly family Glossosomatidae, commonly known as the tortoise or saddle-case makers.  They are distributed around the globe and are "typically are found in fast flowing, cool mountain springs."  This description doesn't fit with the little trickle that depends on the last rain for a little flow but these larvae haven't read Wikipedia.


"Larvae of members of the family Glossosomatidae ... create dome-shaped enclosures of silk which enables them to graze on the periphyton, the biological film that grows on stones and other objects, while carrying their enclosure around like turtles." Wikiwand

Like many other caddisflies, the tortoise larvae make a protective case, bits of gravel held together by silk.  The loose arrangement of the rocks allows water to flow through. Since they get oxygen through their "skin" (cuticle) rather than gills, cool water provides more concentrated oxygen.  Rapid flow and turbulence adds oxygen and they scrape up algae on the rocks for nutrition.

Unlike many other caddisflies which make a tubular case that surrounds the larvae,  Glossosomatids make a turtle-shell shaped case of rocks which is open on the under surface and attached to the rock by silk around the edges.  Underneath it makes a sling of secretions which it rides "like a saddle".**

Life may seem slow for the larva (a turtle's pace?) and not very exciting but there is a lot going on.  Each time it outgrows its case it has to build a new one out of bits of gravel.  The tortoises can live like this for months or years before they pupate.  Then they spin a brown, silken cocoon within their rock house.  This video shows one emerging from its abode.

After about a month they pupate, chew off the silk foundation of their rock house and float to the surface where they will emerge as an adult "fly." Their soft body now hardens (sclerotization) preparing the tortoise for flight.  Most adult species do not feed, flying mainly at night looking for mates.  The adult's common name is little black caddisfly, not a very catchy handle but apparently that doesn't turn off the males.  The female who is lucky in love will end up depositing a gelatinous mass of eggs in or around the water's edge.

Identification by species frequently requires detailed examination of the adult, beyond even the dedicate corps at Bugguide.  We will leave them in their anonymity with this photograph which best demonstrates their common name, tortoise case makers.

June 2020 update:
Some caddisfly species specialize in small streams like ours. This is from MSU's David Bowles whose dissertation included glossosomatids.

"The species in at your place are most likely are Agapetus illini, a species very common to our area. There are two other species of Agapetus known from our area (A. medicus from the Ouachitas, and A. artesus from Maramec Spring). The other glossosomatids in our area are Glossosoma intermedium, which is restricted to large springs, and several species of Protoptila. This latter genus is tiny and they generally prefer larger streams."

=======
*Thanks to Robert G. Hendricks for the photograph above.  His blog is Aquatic Insects of Central Virginia which is filled with detailed information and photographs.
** Troutnut.com