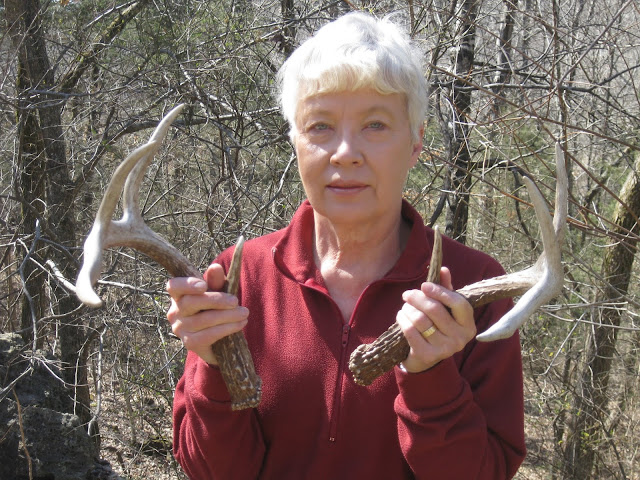 Shed hunting is a popular non-violent winter sport in the Ozarks.  After the fall rut, a buck's need for a bragging rack is gone for the year.  Decreasing testosterone levels lead to reabsorption of the bone at the antler base and eventual shedding, leaving the antlers on the forest floor.  Soon squirrels and wood rats find them and use them for sharpening and shortening their constantly growing incisors and obtaining calcium...unless Barb finds them first.  Barb is the family shed hunter and she found this beautiful pair on January 2008. 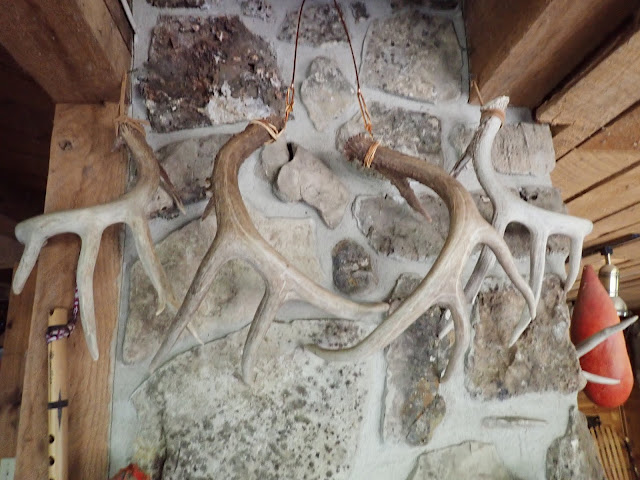 This pair ended up on our stone fireplace, tied with leather thongs as the center of the display.  They remained there until the Spirit of the Great Buck returned 10 years later.  Last Tuesday I came into the creek house and found them on the floor with the leather thong neatly sliced in the middle.  Wood rats, aka pack rats, Neotoma floridana, are frequent guests and we hear the click of a trap several times a year so I wasn't concerned and tied them back on the wall.

Here is where it gets a little weird.  Three days later we were eating dinner at 8PM right beside the wall when they came clattering down to the floor.  We hadn't seen or heard any varmit activity and the thong appeared to be cleanly cut.  Spooky!  The next morning I rubbed Siracha jalapeno sauce on the thongs, tied the cut ends together and hung them back up.  I hoped the lip burn of capsicum would dissuade a rat.

The following night at the same time we were eating when they came crashing down again!  Again the cut thong looked clean and no scurrying mammals were in sight.  I went to bed with the image of the Spirit of the Great Buck attacking me at night with an antler.

The next morning in the cold light of day the fear passed.  Under magnification I compared the cut end of the thong with scissor and knife cuts.  The end was ragged compared to the others, obviously gnawed cleanly in half without the assistance of a ghost.  At least that is what we were telling ourselves.

I hung them again, this time with the thongs tied to copper wire which was looped over the nail.  We returned 18 hours later to find one antler back down on the floor with a chewed thong.  I tied it up again and after sitting on the porch working for an hour I returned to the house and found it cut back down again!  (You can't make stuff like this up!)

This time I put up a game camera on the post opposite the antlers, hoping to catch the culprit digitally.  The next morning the antlers were safe and there was a rat in a trap.  The rat had committed suicide in our rat trap rather than be filmed doing its dastardly deed again.  The antlers have now remained in place after three weeks.

Case closed (we think), but if we don't make the next meeting, who ya gonna call?  Ghost Busters!
===========
And for a pleasant bedtime read to take your mind off that scary tale I would highly recommend this entertaining description of the interaction of termites farming fungus, or is it the fungus that farms the termites?
Posted by Bob and Barb at 3:00 AM 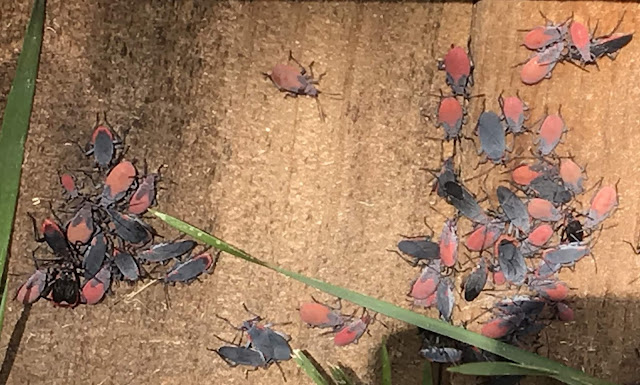 Our Springfield neighbor Cyrus asked me to identify these bugs that were covering his privacy fence.  These are nymphs of the red-shouldered bug (RSB) or jadera bug, Jadera haematoloma.  The interesting question is what are they doing here in our neighborhood?

RSB are members of the soapberry bug subfamily, Serinethinae.  There are 65 hemiptera species in the family and interest in their their evolution and adaptation to human associated changes on the planet has earned them their own webpage, Soapberry Bugs of the World.

The sudden spread of these new species is due to adaptive radiation, "the diversification of a group of organisms into forms filling different ecological niches."  Darwin's finches evolving different beaks to adapt to varied food sources are a prime example of adaptive radiation.  For the soapberry bug family, their success is based on their evolving ability to tolerate the cyanide defenses of the soapberry plant.

Bugguide says RSB occur year-round in CA, TX, and FL, with peak numbers in May in central Florida but they are also found in southern Missouri and Kansas. Their native host plants are Sapindaceae family plants and the western soapberry, Sapindus drummondii, is a native species found in a few southern Missouri counties.


The red-shouldered bug moniker is obvious when you see the adult.  It averages 1/2 inch long.  Most pictures of adults show them mating, either because that is what they do most of the time or that is how to find them holding still for a photograph.  They can be a nuisance like box elder bugs when they invade your home and can also stain children's clothes red when they play in an infested yard.


I think the key to why Cyrus found his fences covered with RSB nymphs lies across the street in a neighbor's goldenrain tree.  This is Koelreuteria paniculata, a native of China and Korea imported to the USA in 1763 and now a popular landscape tree worldwide.  (Editor's confession: we had one once in our back yard.)  In some areas the RSB are observed feeding so often on goldenrain tree seeds, Koelreuteria spp. (Sapindaceae), that they are referred to as goldenrain tree bugs.
Posted by Bob and Barb at 3:00 AM 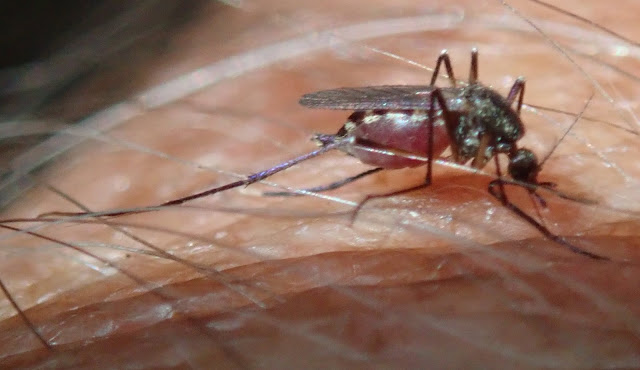 After posting this blog with photographs of a mosquito biting my arm in the middle of the afternoon, I had it identified on Bugguide as the eastern tree hole mosquito (ETM), Ochlerotatus triseriatus.  This turns out to be an unusual insect.

Although it does breed in moist holes in trees, it really specializes in tires, tires stored or trashed on the ground.  If you have ever tried to get all the water out of a tire on a creek cleanup, you know that it is a definition of forever.  This has become an important urban mosquito because of tire dumps and scrap yards around cities where there can be 60,000 mosquitoes per acre in the summer.


"Few mosquito species feed rodents. These mammals are just too jittery and quick to sit still for that. But Ochlerotatus triseriatus, even though it bites a wide variety of mammals, including humans and sometimes birds, particularly likes chipmunks and squirrels. These woodland rodents are active during the day when Ochlerotatus triseriatus is seeking hosts in the woods."  Bugguide

We are unlikely to see these during the evening when mosquitoes are abundant.  They tend to occur during the day, as mine was, when their mammal hosts are active.  The ETM transmits La Crosse encephalitis virus, an uncommon but significant disease.  While 70% of females hatching from infected eggs inherit the virus, the good news is that it isn't that common in most of its range.  There are around 72 cases per year in the US and it usually affects children.  If it only would transmit the disease to the wood rats in our house!
Posted by Bob and Barb at 3:00 AM

I was attending a conference this summer and a presentation on Bacterial Source Tracking (BST) really got my attention.  In more laymen terms, a laboratory identifies the source of the E.coli and other bacteria that are polluting our streams and water bodies.  What really made me sit up and listen was, according to this study in Texas, 62% of the bacteria came from wildlife, while 10% was human and 13% cattle.  These were not the percentages I expected! 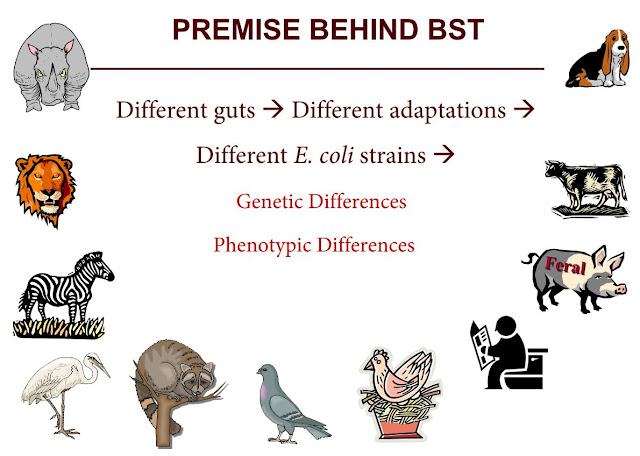 In Texas, there are 273 bacterially impaired water bodies.  With a nonpoint source grant, they set out to identify and assess the sources of these bacteria - E. coli, Enterococcus, fecal coliforms - in these water bodies to properly determine the risk to water recreation.  Then they would develop effective watershed restoration strategies, such as watershed protection plans (WPPs) and total maximum daily loads (TMDLs). 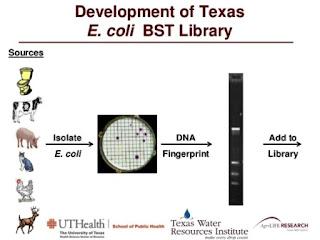 Source surveys, which estimate the numbers and distributions of animals and humans in a watershed, are not capable of assessing most wildlife species or how bacteria from sources are transported to the impaired waters.  Computer modeling addresses the issues with transport; however, because wildlife populations are rarely known, models are unable to adequately assess contributions from wildlife.  BST is able to evaluate wildlife, along with other major sources, and the impacts of transport because BST uses instream water samples for its assessment.

The premise behind BST is that DNA fingerprinting and other molecular targets can identify bacterial strains specific to each animal species since each species has different diets and digestive system conditions that select for distinct strains of bacteria.  This distinction allows the original source of the fecal contamination to be identified.  But BST methods require the development of a DNA fingerprint library. 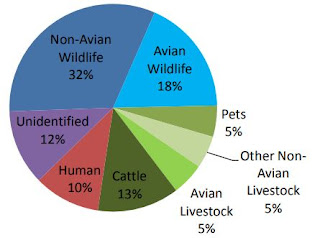 The technologies used for BST are continuously evolving and improving. BST has been tremendously helpful in identifying significant bacterial sources throughout Texas.  The state BST laboratories can provide guidance and assistance with performing BST for watersheds. I think it is time for other states to jump on the BST bandwagon.  Too many times, we "think" we know the source of the pollution is human or CAFO, when it may be wildlife.  More information on BST can be found at: texasbst.tamu.edu.
_______________________________________________________________

Ozarks Water Watch is a non-profit organization dedicated to maintaining and improving the water quality of the upper White River watershed.