By Tonya Smith*
I know frost flowers have been around for a long time, but I'm only three years new to the discovery of them.  I have walked the same trail year round since 2003 and it wasn't until 2013 that I happened upon the frost flower gardens one morning after a hard freeze at the end of October.   Now I watch the weather closely in late Fall, so I can be sure not to miss a walk among nature's most delicate white flowers which disappear quickly with the rising sun's warmth. Nature giveth and nature taketh away. Probably a good thing as I had more than enough sticky seeds and burrs to pick off my clothing from laying on the ground to get the pictures.  Frost flowers are just one of the many things I am thankful for.

Their scientific name is Crystallofolia which was coined by Botanist Bob Harms from the University of Texas.  This is from Latin crystallus, ice, [itself from Greek κρυσταλλος; cf. κρυος 'frost']and folium leaf. These elegant formations have been given many names, metaphorical in nature, most commonly ‘frost flowers’ (or ribbons), a formation which is neither frost nor a flower. These common names, however, are easily confused with terms describing true frost from condensation on a cold surface as well as any picturesque ice formation. 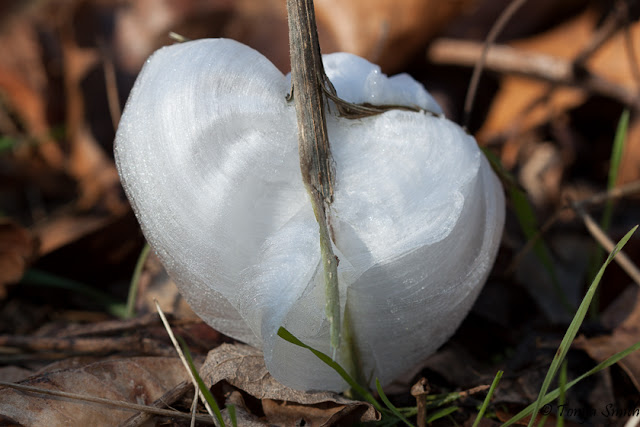 These frost metaphors are of fairly recent origin, not current with 19th Century treatments of the subject (e.g., 'frost freak' was used by several scholars).  I thus propose folium, leaf, as a more appropriate metaphor, since like leaves these formations emerge laterally from the stem, and the enormous diversity of forms finds better matches with leaves than with flowers and ribbons — although this is perhaps less poetic. Perhaps more significantly, the physical process by which water moves to the ice formations is analogous to the transpiration that brings water from the roots to the leaves. My perspective is not new: German botanists in the 19th Century used the term 'Eisblatt' ('ice leaf')." 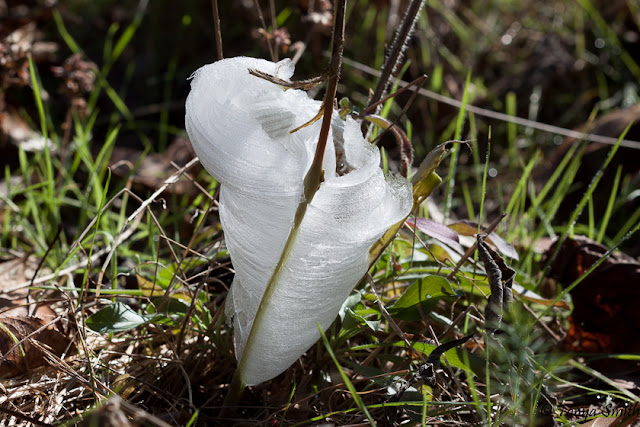 Frost flowers, also referred to as ice flowers, only appear on the stems of a limited number of species. The two most common in Missouri are Dittany and White Crownbeard**. Stinkweed (Pluchea camphorate) is a third but this plant is not widespread in Missouri.
Dittany (Cunila origanoides)
Sometimes called "wild oregano," dittany (like true oregano) is a member of the mint family and can be used as a culinary herb and in teas. Look for it on dry, wooded slopes in Ozark counties. http://mdc.mo.gov/discover-nature/common-plants-and-animals/wildflowers-and-grasses/frost-flowers
Crownbeard (Verbesina virginica)
It’s called “white crownbeard” for the look of the flowers. “Wingstem” describes the narrow green “wings” running along the stem, especially on the lower half of the plant. It’s called “frostweed” for the strange and beautiful formations formed at the stem bases after a sudden hard frost.  Bob Harms with the University of Texas points out that the stem itself doesn't split. The epidermis ruptures along with the cortex and other tissues that seem tightly bonded to it.


There may be more opportunities for frost flowers as the temps have warmed back up and rain is returning adding more moisture, but it is not likely they will be as large or as numerous. If you missed them this year, keep watch for areas where the common White Crownbeard grows so you can visit this spot in the early morning of next year's first hard freeze.

* Photographs and text by Tonya Smith who is a member of our latest Master Naturalist class.
**   Some sources list yellow crownbeard as an occasional source of frost flowers but we have never found any on our plants over the years.

Don't give up on late season frost flowers.  We found them on 40 mornings a few winters ago.  Late season "flowers" tend to occur low on the stem an produce more narrow ribbons like this picture.  They continue until a prolonged freeze kills the plant tissue down in the soil.   As perennials they will return next year.
Check out these resources for further information on frost flowers as well as the resources page:
Dr. James Carter references:
Frost Flowers
Ice or Frost Flowers?- James Carter
JR Carter at Illinois State/ice/diurnal/
Dr.Robert Harms

biosci.utexas.edu/crystallofolia.html
scientificamerican.com/cocktail-party-physics
Other sources of frost flowers
Posted by Bob and Barb at 3:00 AM


While looking at life in a pond at the WOLF school, the students noticed that some of the tiny black specks were actually swimming in the thick mat of duckweed. They started chasing them in a drop of water with a handheld microscope but photographing them proved elusive. It took me even longer to get these blurry images as they wiggled around on damp paper. This video of it swimming on a single drop of water shows it better. 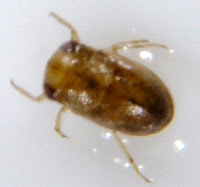 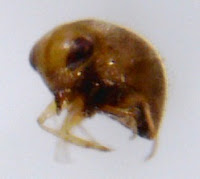 I sent these pictures with apologies to Dr. David Bowles at Missouri State University who responded patiently "That is a pygmy backswimmer (Heteroptera, Pleidae, Neoplea striola). They are by no means rare, but often overlooked due to their small size. Nice find." * Kind words for a blurry picture. According to Dr. Andy Hamilton at bugguide.net, Neoplea striola is the only common member of the family Pleidae (pygmy backswimmers) in eastern North America.

As the name implies, these bugs hang upside down on the surface of the water, using their oar-like legs to swim. These predatory Hemiptera (true bugs) voraciously attack mosquito larvae while avoiding mosquito predators so they would seem to be a good choice to introduce for mosquito eradication. This was attempted in California but they found that N. striola requires cold overwintering conditions to reproduce according to BiodiversityLibrary.org.

I had to go four levels in Google to find any more information about this insect that lacks a good press agent.  Nationalgeographic.com describes its underwater hibernation in New England lakes, awakening only when the water temperature reaches 54 degrees Fahrenheit in the spring.  They have fine hairs which carry air when they dive, allowing them to reach deeper depths before the bubble collapses.  The bad news is the denser the hair, the less surface area the insect has to absorb the air.

None of this is important in our shallow pond.  I will have to measure the water temperature this winter to see how cold it gets, but it appears to have found a good home in this haven far from other ponds.  How it got this far into the forest, only its ancestors know.

*  This blog depends regularly on the patience of expert friends reviewing blurry photographs.  Thanks to all of them for humoring us.

One more thing to be thankful for this Thanksgiving are the humans that saved pumpkins and squash from extinction.  An article in PNAS describes this close call and the role of both megafauna and their new biped enemies in saving them for us to eat.

Current science suggests that large fruits of the osage orange were spread following ingestion and defecation by megafauna.  Likewise the long bean pods of the Kentucky coffee tree and honeylocust contain hard shelled beans that require digestion to germinate, a perfect match for a mastodon or a 3 ton giant sloth.  Furthermore, the large honeylocust thorns may have evolved to protect against these giant mammals, as explained in Trees that Miss the Mammoths.

Cucurbita, large squash and pumpkins, were widespread in the New World and their seeds were found in mastodon dung as early as 30,000 years ago.  They grew in heavily browsed areas and were dependent on the dispersal of seeds by their mutualistic partners.  They contained cucurbitacins, some of the most bitter compounds found in plants.  The few remaining ancient species are distasteful to humans and existing mammals that have evolved more bitter taste receptor genes.  Without the megafauna browsing open spaces and dispersing their seed in dung, their survival was at risk.

Enter the humans who arrived around 13,500-14,500 years ago.  The bad news for Cucurbita was the extinction of megafauna with over hunting likely to have played a role.  The good news was human domestication of squash and gourds for food and containers dating as early as 10,000 years BPE led to the development of the pumpkin as we know it.  No precursor species is known to have survived.  See Popsci.com for more details.

We have now perfected a sweet tasting Cucurbita that we use in pies, coffee and even beer.  It is even tasty to deer and racoon.  Is that good or bad?.....it depends on whether you have two legs or four.

Thanks for the tip from our personal dendrologist, Dr. Matt Kaproth.
Posted by Bob and Barb at 3:12 PM 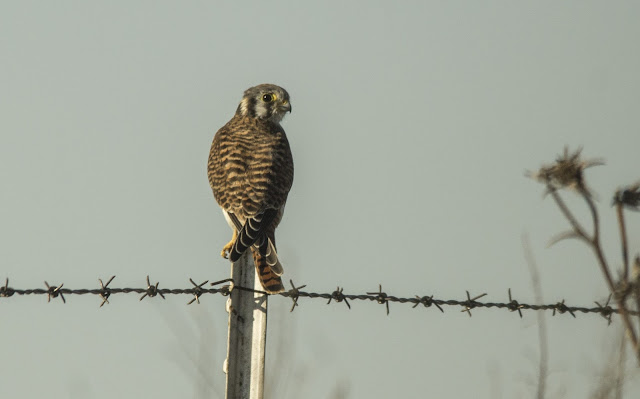