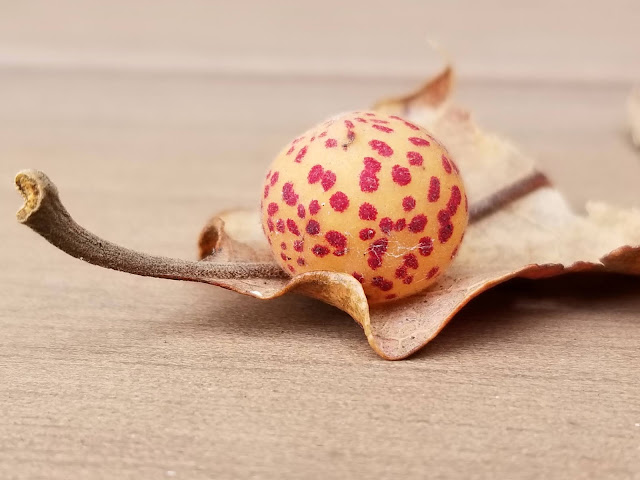 This little beauty showed up on our hike through Wilson's Creek National Battlefield, spotted in the leaf litter by a sharp-eyed WOLF student.  It is a small oak apple gall, and a quick trip to INaturalist confirmed its original owner as a speckled gall wasp, Cynips mirabilis.  An egg is laid on a leaf in a newly opened bud, along with a dose of a plant stimulating chemical which causes the leaf to grow a protective structure around the egg. There a larva will grow, protected and fed by the leaf.

The female wasp is actually an engineer which provides several other services to nature.  In addition to the tiny wasp that may develop, a parasitoid, such as the wasp above, may drill into the gall to lay its own egg.  That larva will feed on the original owner, eventually killing it.  Once either one of these emerge, other insects (called inquilines) such as ants and spiders may take up residence in the empty gall.

Oak galls usually create only mild cosmetic damage to the leaves.  Most online information on them is how to get rid of them including insecticides which can destroy tiny ecosystems that we don't even know exist on our oak tree.  If you see them as a wonderful slice of nature, you can learn more at this site.  For more on the wonderful world of parasitoid wasps, check out this Amateur Anthecologist site.

(I didn't know either.  Anthecology is the study of pollination.) 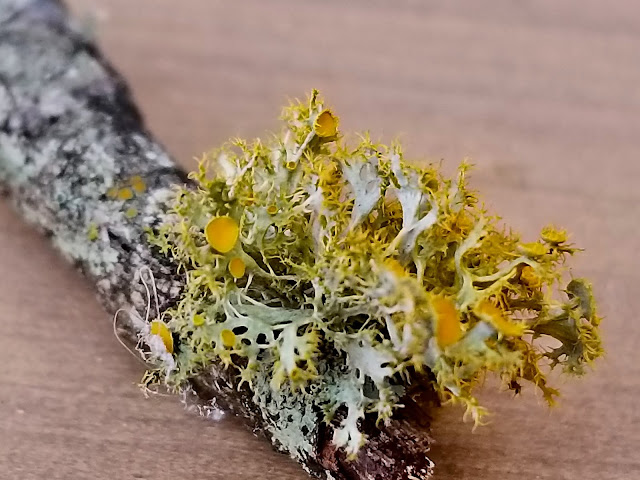 A WOLF field trip always produces lots of discoveries I would miss as my young colleagues are sharper eyed and built lower to the ground.  A student found this beauty in the leaf litter, a 3/4" lichen on an oak twig.  INaturalist confirmed it as a golden-eye lichen, Teloschistes chrysophthalmus.  Lichens in general are sensitive to air pollution so these are good news. 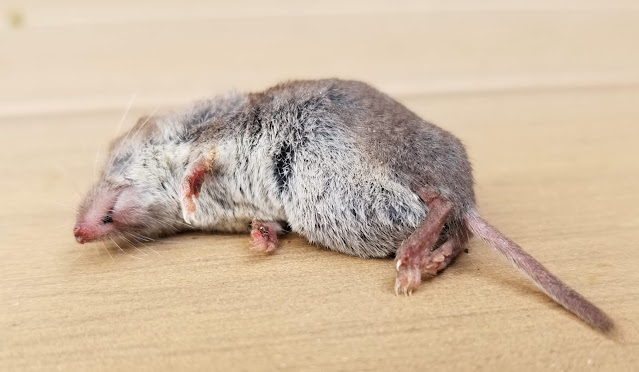 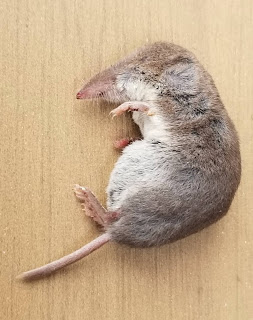 This North American least shrew, Cryptotis parvus, was spotted dead on the trail.  These measure less than 3 inches from nose to tail tip.  The shrew's eyes are small and its ears are completely concealed, stuffed with its short fur.  Although it resembles a mouse, it's in a completely different order.

Shrews and moles are featured in this month's Missouri Conservationist.  They are predators that specialize in insects and invertebrates such as worms.  Their saliva contains a venom that not only paralyzes its prey but also acts as a preservative.  Since they remain active in winter and need to eat over 50% of their body weight daily, keeping a stored supply of food is important. 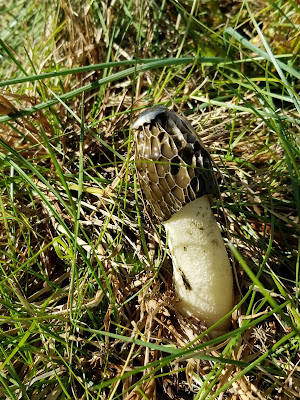 Last up is this little stinker, identified by Ruby who had one of Mark Bower's  books in her backpack.  It is a common stinkhorn, Phallus impudicus.  The species name impudicus translates as shameless, immoral, impudent, lewd, etc.  It covers its spores in a foul smelling goop called a gleba.  This attracts flies which think they are landing on ripe carrion, only to be disappointed as they fly off with spores to plant at a distant location.  More on this at this Wikipedia link. 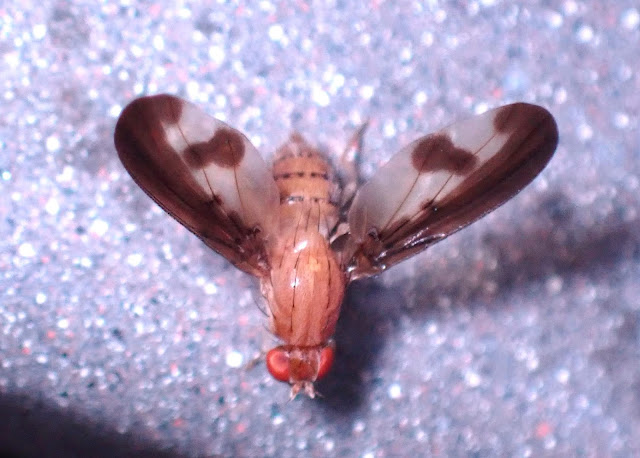 This little 4mm fly landed on the arm of my chair on the deck above Bull Creek.  It wandered around slowly, raising and lowering its wings every few seconds as it patiently waited for me to get out my camera.  INaturalist identified it easily as an antlered flutter fly, Toxonevra superba.  Minnesoteseasons.com describes it:

"Toxonevra superba is is a widely distributed but rare flutter fly. It is sometimes called antlered flutter fly, but not by any authoritative sources. It occurs in the United States from Maine to Minnesota south to Georgia and Nebraska, and in southern Canada from Nova Scotia to Alberta. Adults are found on flowers and on low branches of trees and shrubs. Larvae may feed on plant material, or they may prey on the larvae of bark beetles, or both. " 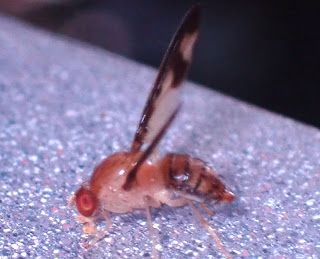 T. superba is a member of the Pallopteridae fly family, so named because of the way the males extend and vibrate their wings.  This earns them common names of trembling-wing, waving-wing or flutter-wing flies.

With its distinctive antler pattern on the wings there are lots of photographs of them on the web but not much more definitive information on the species.

Over 70 species in about 15 genera are found in the temperate regions of the Northern and Southern Hemispheres according to Wikipedia.   With one last look at it below you can see why its 1/6" size is its only protection during deer season. 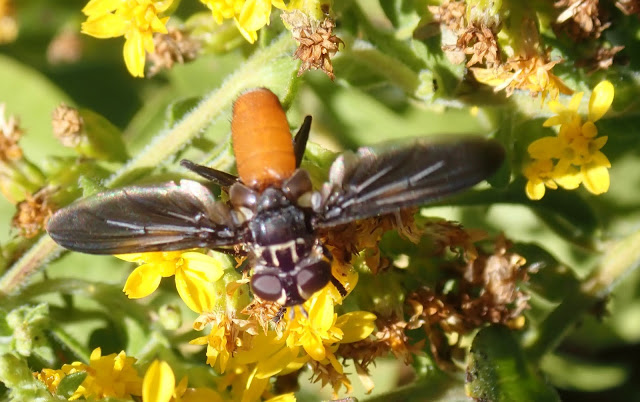 I followed this little guy in our back yard as it darted from flower to flower, skimming the surface like a typical pollinator.  Even without magnification I could see the the large headlight eyes of a fly.  INaturalist identified it as a swift feather-legged fly- Trichopoda pennipes.  This view on the right shows how it earned its "feather-legged" name.

"These medium-sized flies have a velvety black head. The velvety black or brown thorax shows a few yellow stripes. Eyes are large brown with yellow between. The color of the slender abdomen varies from bright orange to completely black."  INaturalist 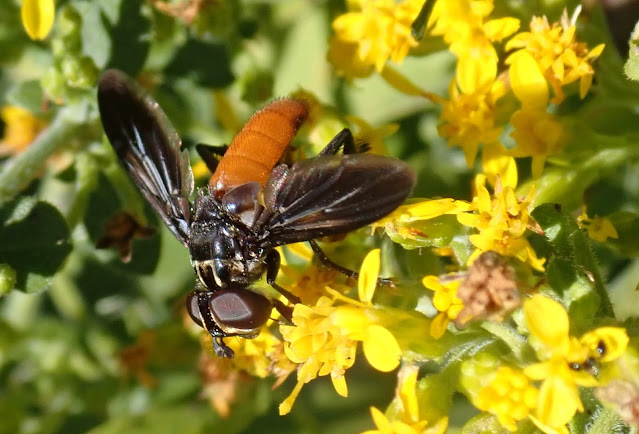 While they are feeding on nectar of flowers such as Queen Anne's lace, they are also on the search for insects to raise their young. They will deposit a few eggs on squash bugs, stink bugs and leaf-footed bugs.

"When the eggs hatch, the larvae burrow into the bug. If there are several larvae in one host, only one survives. After feeding on the bug's tissues, the cream-coloured larva emerges and falls to the ground where it pupates in a reddish-brown puparium formed from the last larval skin. The bug meanwhile dies. After about two weeks, an adult fly emerges from the pupa. After mating, a female fly may lay several hundred eggs in total. There are up to three generations of the fly each year and the parasitoid overwinters as a second instar larva within the body of the overwintering host,"  INaturalist.

Old feather-leg is a gardener's friend, laying eggs on a wide variety of plant pest species.  There are different biotypes across the United States, preying on different hosts in different regions.  On the southern green stink bug, the rate of parasitism can be as high as 93% and up to 80% on the squash bug.
Posted by Bob and Barb at 12:44 PM 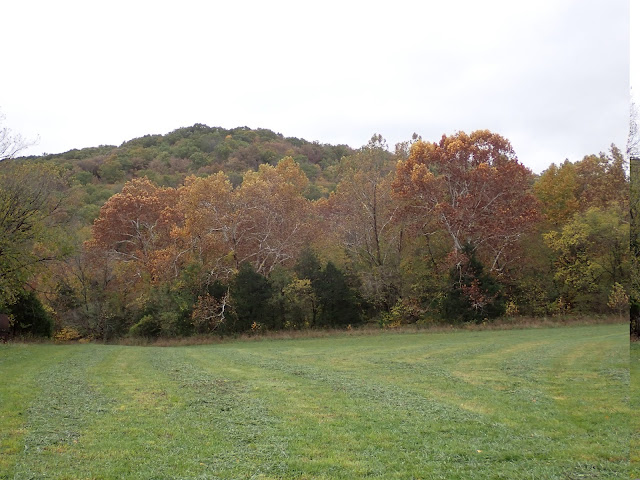 After several rainy cold days the sun returned for two glorious fall days.  After several hours cutting firewood, I treated myself to a nap on the newly cut hay field along the edge of the valley.  I was looking up at the blue sky and the orange and red leaves above my head and feet, with an open horizon to the north and south.

I noticed a tiny speck appear in the north.  As it came overhead I could see the typical shape of a soaring turkey vulture, its wings held above in a flat "V" shape.  It was flying higher that I had ever seen and another speck followed, then another, all spaced out but headed in the same direction.  Eventually I counted 25 over 5 minutes, with never more than 5 scattered in the visible sky at a time.

After 15 minutes my dog came over to tell me it was time to get back to work, but as I started to get up another speck came in sight.  I checked the time and start counting again, ending with 53 when the parade ended 10 minutes later.  Again, not a single wing flap the full time, and the vultures were always widely separated.  There were never more than 5 birds visible in the whole open sky at one time.

Thermal updrafts allow turkey vultures much longer flights while soaring with their wings steady.  The vultures migrate in the daytime and avoid rainy or cloudy days which don't have the updrafts that allow them to glide without flapping their wings.  In the full time that I was watching them I never saw a single wing beat, just their steady glide and distinctive teeter from side to side as described in Bird Note.

Research on turkey vulture migration included a bird fitted with a heart-rate logger during 124 hours of flight during 38 contiguous days.  That showed only a small increase in mean heart rate as distance traveled per day increased, which suggests that, unlike flapping, soaring flight does not lead to greatly increased metabolic costs.

I didn't get any pictures as I could never get more that two birds in a frame of my telephoto.  It was just one of those "you had to be there" days.