So, reaching for a new height in the ridiculous pursuit of weird tiny insect life, I present you with dermestid beetle larvae found in a deer skull.  We have taken this skull to WOLF the last 3 years while it spent the rest of the time in a bag upstairs at the creek house.  When Barb took it out at WOLF some powder fell out of the base of the skull and a student noticed that something tiny was moving.  Magnification with a digital microscope showed cute fuzzy larvae.

Chris Barnhart identified the photograph as Dermestid beetle larvae.  There are over 500 species of beetles in the Dermestidae family with a variety of lifestyles.  Most of the larvae are scavengers, living on dry plant and animal matter, sometimes with very specific tastes.  Dermestid larvae are profoundly covered with varying lengths of hairs (setae) that gave them a distinctive appearance. The larvae are generally dark brown to black and go through complete metamorphosis.  Adults are less commonly found and feed on flowers and shrubs.

Some dermestids are famous for their forensic connections, living on dead animals and giving clues of the time of death.  They are available on line to use in cleaning skulls and bones of animals in laboratories for the study of anatomy.  Our larvae had been surviving in a deer skull for several years.  Fortunately they like to eat dry dead stuff.

Above you can see the results of life in a deer skull, lots of larvae moving around in their world of frass and molted skins (exuvia).  This prompted me to make  this video for a closer look.  For more information on the value and risks of using Dermestids to clean bones, watch this educational PBS video showing the beetles at work.
============
More species are discussed at Bugwood.org/
Posted by Bob and Barb at 3:00 AM 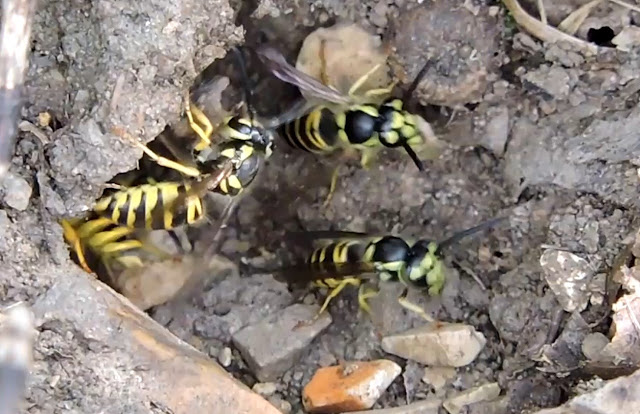 I was chasing a tiny skink through the leaf litter six feet from our front door when I saw several yellow flying insects.  We have Syrphid or flower flies on our deck regularly, scaring visitors as they look like yellowjacket wasps but I wasn't fooled..... yet.  I got out my pocket camera to get some closeup videos, a big mistake.  Just then I saw five swarming around in the grass and then more hovering around a finger sized hole.  I thought "Do Syrphid flies nest communally?"  just 2 seconds before the first of several stings - "Yellowjackets!"


I ran backward swatting them off and the attack stopped as the swelling started under three stings.  We love nature but occasionally nature gets too close and our house qualifies as unnatural.  After applying ice to the stings with unimpressive results, I got a can of "kills on contact" wasp spray and soaked the hole from a distance several times.  I returned 20 minutes later with my telephoto camera. (Note to self - video wasp nest = telephoto). 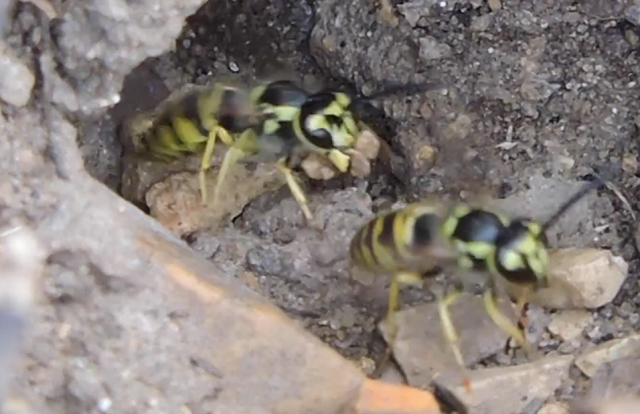 In spite of the insecticide, the hole was busy with wasps coming and going for the next 8 hours.  Many of the outward bound were carrying something in their mouths.  They were moving too fast to see what they were carrying.  It looked like they were panicked and evacuating the hole.  So much for the "kills on contact" on the spray can.  Apparently Ozark yellowjackets can't read.


After converting the video to 8x slower playback* it became obvious that they were not planning on leaving.  They were actually carrying out small pebbles, enlarging their quarters, carrying on like nothing had happened.  I had a lot to learn about yellowjackets.  This intriguing Youtube video by Bret Davis, aka Hornet King** was a great introduction to the subterranean world of yellowjackets.

YJ usually build their paper nests underground, starting in a small hole created by a mouse or something similar.  As they create the cells for the offspring of their queen, they work around the outside edges of the paper nest, excavating rocks and soil to enlarge the nest.  As the colony grows they create several side holes (starting at 20:30), slowly digging a larger hole which will be filled with new layers of the nest.

So how big do they get?  This one was removed from a 14" X 9" hole fully excavated by the wasps themselves!  I don't know about records but Bret's weighed an estimated 10 pounds.  (Taking a nest with scattered yellowjackets on it to the bathroom scale in the name of science probably isn't a good idea.)  His nest was seven layers deep.

His video is 27 minutes long but well worth the time.  Unlike many videos focusing on the excitement and danger of stings, Hornet King vividly shows the process of nest building.  Here for instance he shows the larvae beginning to weave a silk cap to to paper homes where they will pupate.

As I nursed the swelling over the next 5 days, I identified my new neighbors as eastern yellowjackets, Vespula maculifrons.  Baldfaced hornets (Dolichovespula Maculata) are yellowjackets with a pale makeup.  Both are colonial nesters but hornets nest above ground while YJ are usually below ground or in enclosed spaces like the soffit of a house.  We have that problem with our red Polistes wasps, but at least they aren't quite as irritable.

Additional thoughts from Hornet King:
There are many subspecies of wasps in the Dolichovespula grouping. Another of the Aerial nest builders is the Dolichovespula Arenaria, which look very similar to the subterranean YJ (Southern Yellow Jacket - Vespula Squamosa) species. This subject is always a area of confusion for my many of my viewers as they think "Yellow Jacket" is a term only given to yellow and black wasps. However, there is more to the classification than just its yellow body (Bald faced hornet being a prime example)
I did have some slight consolation as I sat on the porch swing balancing ice on my stings.  A loud and coarse buzz announced the arrival of a robber fly, Promachus hinei, on the swing chain.  It was holding a yellowjacket in its jaws and seemed to be showing off its catch.  I photographed it and watched it fly away.  It pierces the body of its victim and sucks out the insides, appropriate justice in this case.

*  Slow motion video of yellowjackets rock excavation
**  The Hornet King Youtube channel has many more detailed explanations of the nests of other colonial nest builder wasp species.
Yellowjackets on Bugguide.
Yellowjackets and Hornets on University of Florida.edu

We are at the beginning of frost flower season although few botanists will ever see them.  The "blooms" extrude around the lower stems of Verbesina virginica on nights where the temperature drops well below freezing and they fade after a few minutes of direct sun or as the temperature reaches the mid thirties. 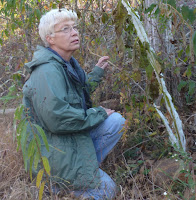 The delicate sheets of ice split the stem's epidermis lengthwise, thin enough that you can see your finger print through them.  Early in the season they may extend 12 to 24 inches up from the base but as the winter rolls on they become shorter and eventually somewhat thicker.  A hard freeze for several days which freezes the roots will end the season prematurely.  Our personal record was 40 nightime blooms over a winter. 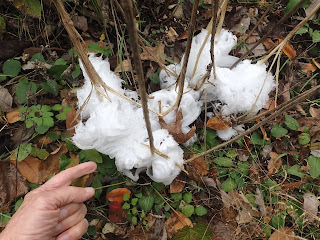 The mechanism of FF is the ability of water to "supercool," that is to drop below 32 degrees without crystallizing.  This is what allows clouds to hold liquid water in the colder atmosphere.  When supercooled water is shaken or encounters a foreign particle it freezes rapidly, accounting for the icing on aircraft wings when they fly through cumulus clouds.  This also accounts for the large accumulation of ice on trees and powerlines in ice storms that are so memorable to those of us in the Ozarks.

This is what happens when the supercooled water extrudes from a V. virginica  and contacts the outer stem's epidermis.  You can see the dramatic ice crystalization of supercooled water in this demonstration on Youtube.


As frost flower season progresses the "blossoms" are lower to the ground and take on many extraordinary shapes.  Stems may be damaged or horizontal but the ice marches on.  Cups, curls and spirals are created, demonstrating nature's varied designs and sometimes a sense of humor. 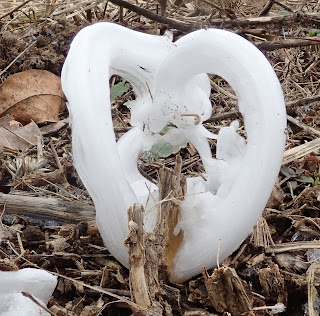 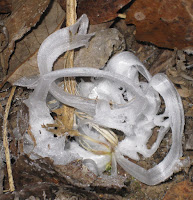 This is the time of year to be watching for frost flowers along the weedy edges of fields and roadsides.  These most commonly occur along the stems of Verbesina virginica, a plant with small white flowers on 3-5 foot stems that are winged along the edges.  It has a confusing list of common names including frostweed, white crownbeard, iceplant, iceweed, and wing stem.
FF also can be found around the base of Cunila origanoides, whose common names include dittany, wild oregano, stone mint, and frost mint, and Pluchea camphorate. also known as stinkweed.  These are smaller plants that are common in Missouri but less likely to cover a field edges.* 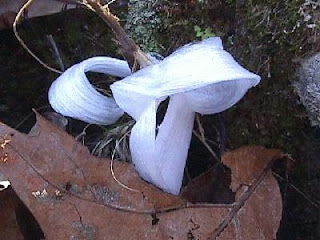 You can see some of the exquisite shapes that Mark Bower photographed before this last Friday's WOLF School field trip in this Flickr album.
=========
* Reports of FF on yellow crownbeard (Verbesina alternafolia) are probably due to confusion with Verbesina virginica as they frequently grow together and are hard to separate in winter time when the flowers are off.  We have been monitoring tagged yellow crownbeard for years and have never seen FF on them.