I received this photograph from our friend Courtney who found the insect with her 3 year old assistant Hattie. They sent it in to INaturalist and got a tentative ID of Bolbocerosoma bruneri. That would put it in the Geotrupidae family, the Earth-Boring Scarab Beetles, EBSB, (also called dung beetles).

I would agree with the genus Bolbocerosoma but have reservations on the species. All the photographs of B. bruneri on Bugguide show a thin curved black line on the thorax immediately behind the head which is missing in the picture above, so I am going to stick to Bolbocerosoma sp which gives us 12 species to choose from in the US.  They all have in common the orange pronotum, black markings and five deep punctuate grooves on their elytra.


EBSB have a very interesting life cycle. They burrow tunnels into the ground, some up to 9 feet deep. They may have multiple chambers at the bottom and the opening on top frequently has a pile up of dirt like a miniature prairie dog mound.  They deposit an egg at the bottom and then food above it forming a plug. This can include collected feces, decaying plant material, and fungus. The adults do not care for their young.  When grown, the grub will pupate, the adult emerges and climbs to the surface to fly off, probably relieved to be out in the fresh air.

They soon however return to the same old diet, eating decaying material and fungus and  and are often found on dung piles or compost heaps. Adults come to light which probably explains the one on Courtney's porch. Once you get past the "yuck" factor, remember that they are an earth-friendly species, similar to a vulture in recycling carbon and nitrogen from dead and decaying material into the soil. You didn't have any other plans for that dung, did you?

Life in a Walnut Husk 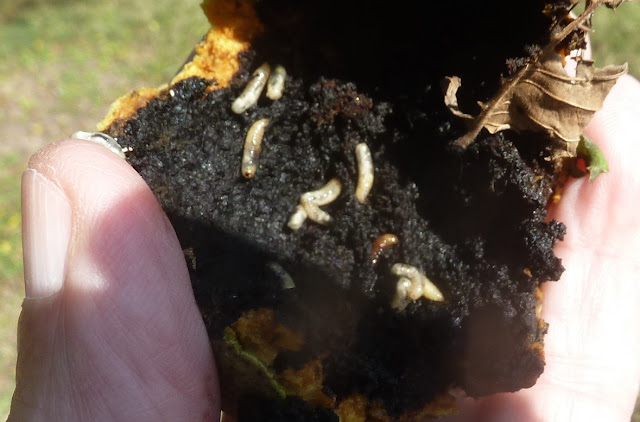 We were collecting walnuts to make walnut ink when I discovered life living under the husk.  It turns out that the space between the nut and the rind is a busy place.  These little wigglers might have given the normal observer a bad case of the heebie-jeebies but they only piqued my curiosity.  These are the larvae of the walnut husk fly (WHF), Rhagoletis completa.

Husk fly eggs in groups of up to 15 are deposited under the outer husk surface and hatch after five days into little white maggots. Older maggots turn yellow with black mouthparts.  The maggots feed inside the husk, gradually turning the husk mushy and black. After feeding for a month, the maggots drop to the ground and burrow into the soil where they will spend the winter as pupae.

"The adult is about 1/4 inch (6 mm) long, slightly smaller than a housefly. It has large, iridescent, greenish eyes, a tawny  brown body color and banded wings. It has a yellow spot on its back. Its conspicuous wing markings make it easy to identify. The female is larger than the male and its abdomen is more pointed." Washington State University also has  more information on WHF.

WHF gets no respect on the internet.  The maggots' feeding discolors the nut shells and makes the husks hard to remove. Early summer husk fly infestations also can stunt nut kernel development.  They can occasionally attack nearby apricot and peach tree fruit.  Most references are to methods of killing them and preventing the spread to commercial walnut crops.  A number of tactics are described to combat them including use of Sevin and malathion, which can affect a wide variety of innocent insects. 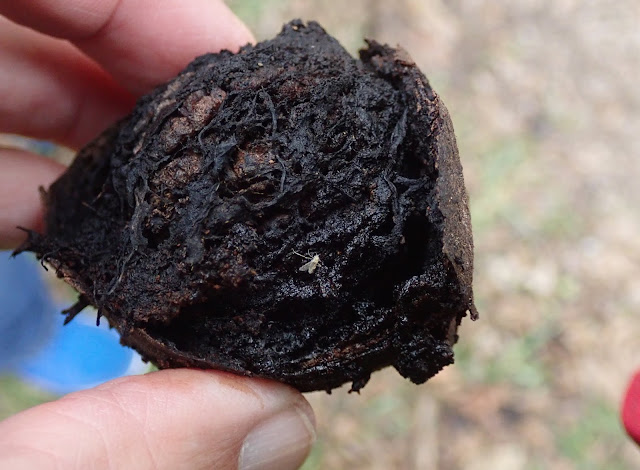 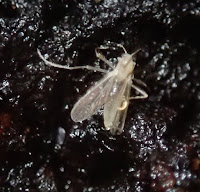 Damaged walnut husks laying on the ground may host other insects.  I have found other insects and tiny spiders hiding inside damaged husks and on a WOLF field trip while looking for husk fly larvae we found this tiny winged creature pictured here which I couldn't identify.

I recently found some other even more mysterious critters, but you will have to wait for them in another blog.  Speaking of tiny creatures, A Chaos of Delight has hooked me on "mesofauna" - photographs and stories of the wide variety of 0.1 mm to 2mm creatures living in soil.  It is addictive so enter at your own risk.
Posted by Bob and Barb at 3:45 PM