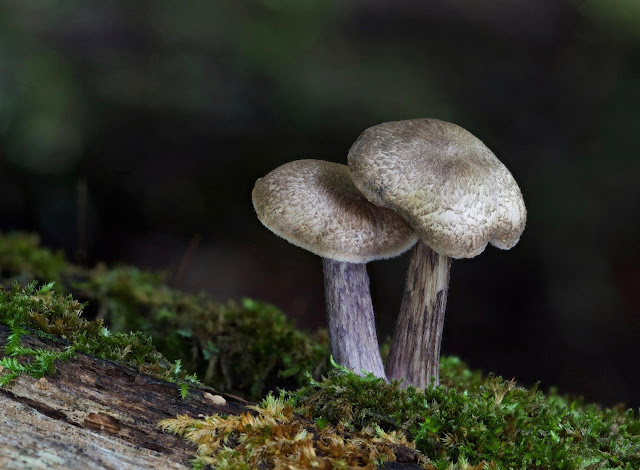 Someone asked me if I hunt and I answered "no", then stopped to think about it.  I do hunt but it is for interesting plants and insects.  Birders "hunt" birds and many mycologists hunt mushrooms, neither group intending to eat their prey.  Here is Mark Bower's description of a September "hunt."

"I had been walking in the woods for 2 1/2 hours looking for mushrooms to photograph. The woods were dry, and I had only taken one picture all morning. As I was leaving the woods, I noticed two small mushrooms growing together on a moss-covered log. I assumed that they were just the usual boring brown-capped Pluteus species which are very common, and not worth stopping for. On closer inspection, however, I noticed the scaly appearance of the cap, which would be very unusual for Pluteus. 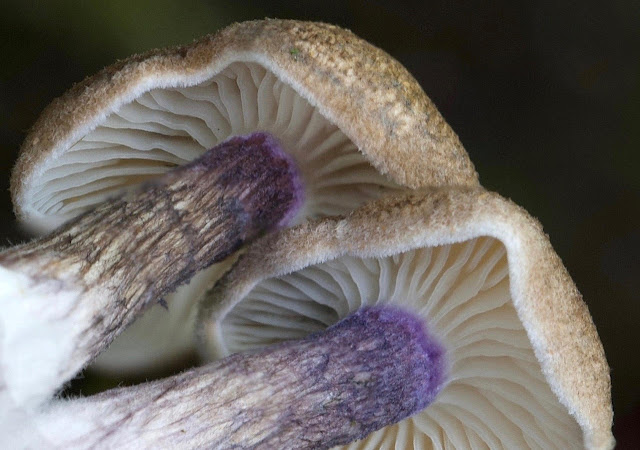 This prompted me to get on my knees and closely inspect it. To my surprise, the stem appeared to be streaked with purple. Multiple photographs were taken and a spore print revealed pinkish spores. With this information, and after reviewing my books, using keys, etc., I had no clue. I then put the info on the MOMS Facebook page. The genus Entoloma was suggested as a possibility.

The color of the spores is one of the distinguishing traits used to identify mushrooms. There are a lot of ways to make a spore print but the basic method is placing the underside of the cap on a surface and keeping it moist to encourage the spores to drop.  It helps to have a dark and light surface to contrast against the spores which may vary between white or pink to dark brown. 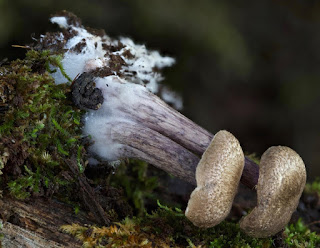 I then posted it on Mushroom Observer, which is a website which is reviewed by mycologists, like Bugguide for Fun-guys and gals.  My boring little mushrooms were identified as Entoloma tjallingiorum, and even though I can’t pronounce the name, I’m very happy to have found it.  Half the fun is in the hunt while identifying them is like cleaning the game.  And stop asking "are they edible?"

Fuzz on the Kale 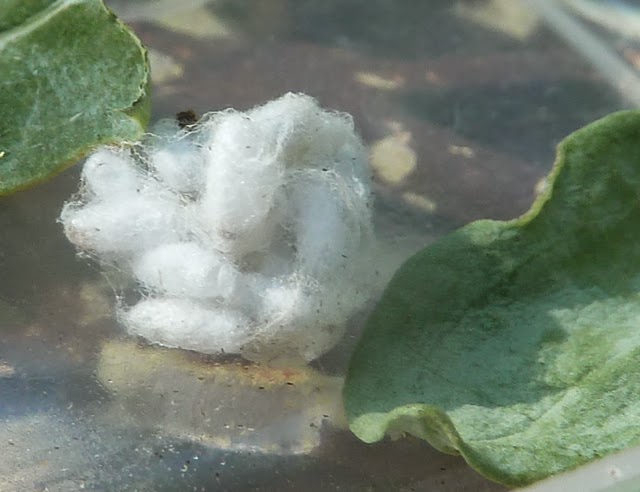 My editor (wife Barb) keeps me constantly entertained with her discoveries in the garden.  This time it was clusters of tiny fuzzy spots stuck on the underside of lots of our kale leaves.  The whole cluster measured only an eighth of an inch, a jumble of oblong fuzz balls.  We put the leaf fragment in a plastic box and left it on the dining table for a few days.*
When we next checked it there were tiny 2mm black specks on the lid.  When I opened it, they immediately flew out.  The next day there were more and this time the box went in to the freezer for a few hours before opening it. These turned out to be tiny wasps.

I sent the pictures to Bugguide.net and got a rapid response from Ken Wolgemuth.  He identified them as braconid wasps (Braconidae) in the subfamily Microgastrinae.  He explained that these are "individual cocoons that were spun by the wasp larvae that were consuming the host (e.g. caterpillar) that was feeding on your kale. They then emerged from these cocoons as the adult wasps you are seeing now."

The Braconidae family of wasps numbers over 17,000 species and counting.  They are parasitic like their larger Ichneumonoidea wasp cousins, using the larvae of beetles, flies, butterflies and even aphids to feed their young.  Once they crawl out, they spin their cocoons for protection until they emerge as adult wasps.

We think of having a virus as a disease but for Braconid wasps polydnaviruses are their nannies.  The wasps carry polydnaviruses which they have coevolved with over thousands of years.  These are injected into a host caterpillar along with their eggs.  The viruses are harmless to the wasp but immediately start to disable the host's immune defenses against the foreign eggs.  The wasp eggs hatch, develop into larvae and feed inside the host until they emerge and form the pupae we found above.  The wasps soon emerge and begin the cycle again with their friendly virus still on board.**


These clusters were really good news.  We have lots of cabbage white butterflies (CWB),  Pieris rapae, constantly hovering around the kale.  They are the most common butterfly in North America, an unwelcome European import which arrived around 1860 and is now on every continent on the globe except Antarctica.  They are a hearty breed, the first to emerge in the spring, flying from March through November.  In addition, their reproductive success comes from the fact that they may have 7-8 hatches a year and the wide range of host plants they can raise their young on.

On close inspections any of you gardeners may find one of these innocent looking caterpillars.  CWB lay one egg on each available leaf of their host plant. They eat predominately plants in the mustard family, (Brassicaceae) including cabbage, broccoli, and our kale as well as dandelion, red clover, asters, and mints.  They seem especially addicted to our leafy garden plants, chewing holes in the kale leaves until they look like  sieves.

The pupae of the cabbage whites are green or brown with points on the ends, resembling a dried up leaf. The last batch of caterpillars hibernate over the winter as chrysalids and hatch into adult butterflies in the spring ready to start the cycle again.  We have learned to embrace these little fuzzy spots on the kale leaves, wishing them great reproductive success as they munch away on the innards of the invasive caterpillars.

We can almost forgive them for occasionally attacking caterpillars we raise at the Butterfly House.  For a graphic example of Brachnoidae larvae emerging from horn worms, check this Youtube video.

*  Note: I am blessed with a wife that will tolerate road kill snakes and a found blue heron skulls in her freezer.  Since she accepts them, what problem is a little plastic Gerber baby food box containing insects sitting beside the salad bowl?
**  Braconid wasps and Polydnavirus