A few years ago we lost our phone connection at Bull Creek.  The phone company came out and opened a connection box on the pole and it was totally stuffed full of ants and their eggs and larvae.  One quick spray of Raid and our problems were over.  These were just our native ants, a mere taste of what the latest invasive species of ants may bring.

was named for the Texas exterminator who noticed their increasing numbers in 2002.  They get the crazy title from their wild and crazy gait as they travel, avoiding the orderly lines common to other ants.  They arrived in Texas and the Florida coast from Brazil and fell in love with our country.  They can nest anywhere and eat almost anything, the perfect ingredients for an invasive species.

They have a particular affection for electrical circuit boxes, possibly drawn to them by the warmth of resistance or the magnetic fields the currents produce.  Either way, they can cause short circuits by chewing insulation or packing tightly together as happened with another species in our phone box.  Worse yet, if an ant happens to be electrocuted, it will release an alarm pheromone which will bring its cohorts running to defend it, sometimes causing a short circuit.

Red imported fire ants (RIFA) have already received lots of press as they have invaded the south.  They have reached 25 states as well as Asia and Australia, transported by their new best friends, humans.  Their reputation comes from the painful stings they deliver when disturbed by humans.  Unlike most ants which bite and then spray the bite wound with formic acid, RIFA have a sting with a necrotizing toxic alkaloid.  They rapidly displaced many native ants.

RIFA have an unusual strategy to survive in their native environments in the wetlands of Brazil where they endure frequent floods.  They simply build rafts and float to a new area.  They are even able to build bridges across small flooded areas.  Once the raft bumps into a structure such as a tree, they grab on and climb to safety until they can start a new colony.

The process is explained in this Smithsonian Magazine article.  Basically, their hydrophobic bodies, which repel water, leave air spaces between their bodies even when tightly compacted masses of ants are forced under water, serving as a group life preserver.  By this tactic, a mat of ants can float along the flood awaiting a new place to land and start all over.  With climate change creating increased flooding and rising sea levels, there may be a message for some of our human colonies.

These fire ants tend to build large mounds which can be destructive but don't usually involve human dwellings.  They tend to keep to themselves unless we disturb them.  They have now met their match with the crazy ant.  The crazies produce chemicals from where a stinger would be, then use their legs and mouth to spread it on their bodies like a lotion.  This is an antidote to the fire ants chemicals.  It also sprays this acidic mix as a defense, allowing them to take over new territories from other ants.


How bad are crazy ants?  In some places they had been introduced to control fire ants.  In Texas where the red fire ants had taken over and are now being driven out, people want the fire ants back!  You can find out why and see the crazy ants in action in this video.
Posted by Bob and Barb at 11:26 AM 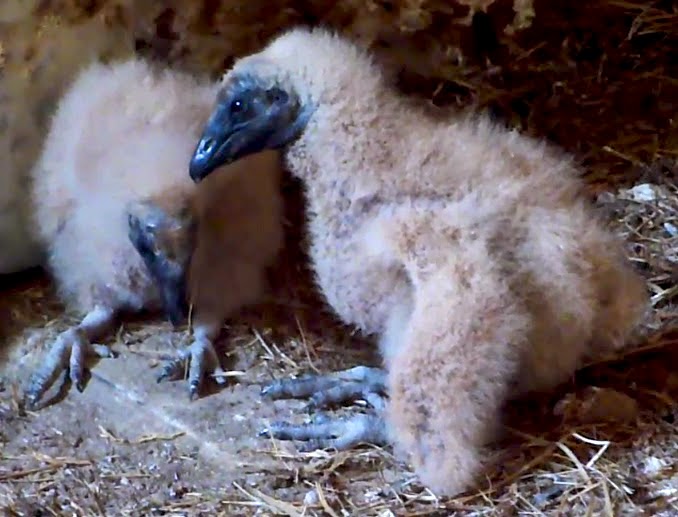 The black vulture family in our barn now has teenagers.  They are displaying lots of attitude when I look in on them now.  The adult birds both care for the young and since they cannot be differentiated by appearance* I will call them parents.  They now stand by unperturbed by my presence, maybe even a little proud.  When one was sitting in the window opening by which it comes in and out, you can see that it watched me from six feet away, looking over its shoulder occasionally to check the chicks in the barn. 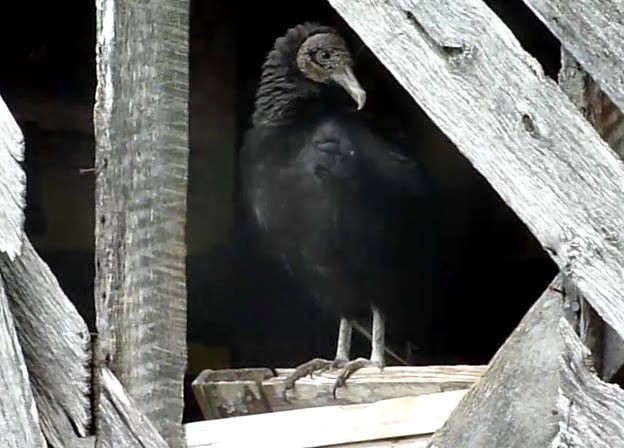 Vultures have no voice box so their vocalization is by an open throat hiss.  In this video you can hear the chicks telling me to stay away.  If you wondered how something so little could make so much sound, notice its body as it inhales and then strains, vigorously pushing the air through its throat.

Visitors are always expecting a stench - after all they are vultures.  In actual fact I have never noticed an odor in their nesting area in four years.  I use the term area rather than nest as they just lay their eggs on the bare ground.  Over their brooding period the eggs may be moved around in a three foot circle.

Soon our little teenagers will grow into an awkward phase of adolescence.  Coming soon to a blog near you.

*  Sexual dimorphism is the term of describing the obvious differences between the male and female of the species. Vultures lack these but have no apparent problem finding mates, so apparently they know the difference.

Mike Chiles showed me this picture on his cellphone, asking for identification.  I didn't recognize its small size in the palm of his hand until later when he sent me these pictures.  In the picture below, the snake was hiding its most prominent feature, the neck.