I have been dissecting these rough bulletgalls which were clustered all over the branches of a small bur oak at Wonders of Wildlife.  Courtney Reece who teaches at the WOLF School had noticed wasps and flies swarming the tree and sent me the whole story.  She also researched it and came up with a diagnosis of rough bulletgalls.  These galls are produced by a rough bulletgall wasp, Disholcaspis quercusmamma. 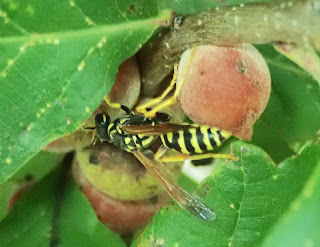 She warned me that there was a large number of yellow jacket wasps on the tree.  The numbers were down by the time I arrived but the wasps were on their sugar high and paid no attention to me.  While they are notorious for attacking people threatening them by walking over the hole of their nests in the ground or running a mower over them, these didn't seem to be bothered by my camera a few inches away. 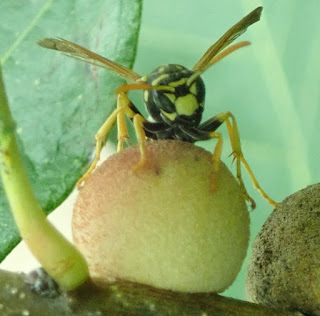 So why all the insect traffic?  These galls exude a sugary juice that is an invitation to party to a number of sweet-loving insects.  According to Bugwood, "Rough bulletgall wasps produce a woody, generally rounded gall on bur oak, with a slight point. Very heavy infestations can occur that largely cover twigs, reducing growth rate of the tree. The galls also exude a honeydew-like sweet material that is attractive to bees and wasps and fosters growth of sooty molds."

"Females emerge in late October and early November, after a hard frost. (A small circular hole in the gall indicates emergence.) Eggs apparently are laid in the terminal growth during the fall. winged and wingless forms are produced; males apparently are unknown.

In late spring, the developing insect stimulates a pocket of stem tissue to produce a large rounded gall, in which the young wasp develops. Galls are pale brown and soft in early stages, later darkening and hardening. Only a single wasp develops in each gall, although sometimes other insects (inquilines) also share the gall. The larva pupates within a small cell in the center of the gall, emerging in early fall. There is one generation per season." Bugwood Wiki

The gall is firm and leathery, hard to cut open.  The outer layer is woody and tough, covering a thick middle layer the consistency of a dry apple that breaks off in chunks.  A thin third layer surrounds the pupa case leaving an open space around it.  The case its self connects to the inner layer of the gall with a knobby stem, somewhat like an umbilical cord which provided nutrition to the larva.

In attempting to raise the gall wasp, you can't just assume that what emerges is the cause of the gall.  Like Forest Gump's box of chocolates, the life and food web doesn't end there.  There are at least five Sycophila sp.  of parasitoid wasps that  live in D. quercusmamma larvae. Sometimes other insects (inquilines) also share the gall.
======
More on bulletgalls in general is at this Ohio State University site.
=============
Addendum: 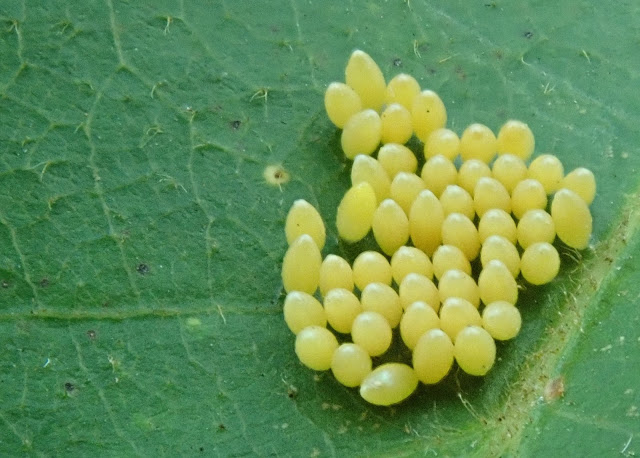 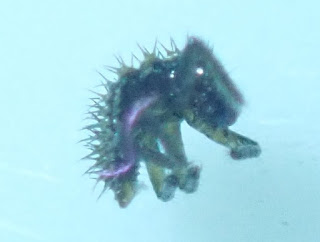 A sharp eyed WOLF Student examining the galls noticed a tiny 1/2" patch of eggs on a leaf.  We kept the leaf in the box to see what would emerge.  There were tiny 1mm black dots in the box 3 days later.  The best macroscopic photograph I could manage showed enough in profile to call it a "ladybug" (beetle actually) larva.

It is most likely a European lady beetle, Harmonia axyridis.  It is now commonly found in gardens and fields, especially where humans influence the landscape.  This isn't a bad or invasive species although it does tend to out compete with some of our native species. 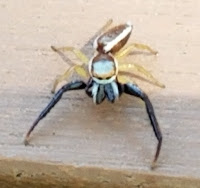 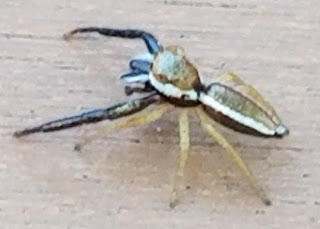 I saw what initially looked like a small ant slowly scouting the surface of a patio table.  It was less than a quarter inch long (5mm) and skittish when I got too close.  I was able to get these pictures with my cell phone, a bit blurry when blown up but good enough to ID it on INaturalist as a Common Hentz Jumping Spider, Hentzia palmarum.

It has impressive front legs that resemble a crab spider.  When I got too near it jumped several inches over the table edge and dangled by a trailing strand of silk before climbing back up.  Jumping spiders don't build webs but also use their silk to create a burrow to hole up into.

They hunt by relying on their large eyes in front as they stalk their prey (See last month's blog for a discussion on their binocular vision).  The long front legs holds their prey while they inject their venom.  The black and white striped structures in this photograph are their pedipalps or jaws.  The large pedipalps and dark color generally identify this as a male.  There is a good video of H. palmarum in action at this Youtube link.


There is a dramatic difference in appearance between the male and female, making them look like separate species.  According to Bugguide "Females are hairier, paler in color, often marked with forward pointing triangles along the center of her abdomen."

Brandon Woo's specimen looks warm and cuddly compared to the males, unless spiders aren't your thing. 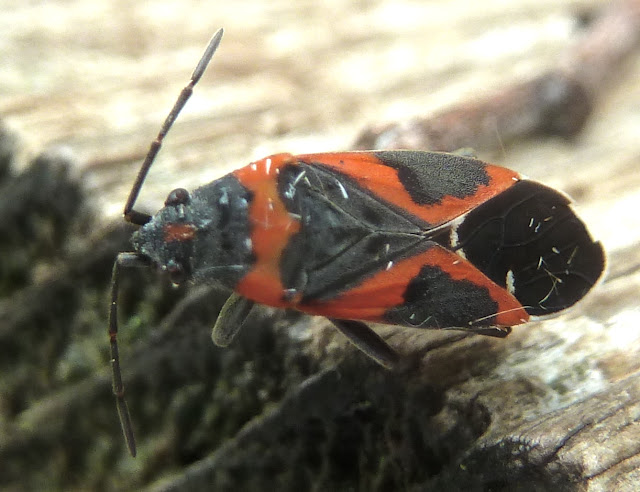 Barb was dumping plant debris into the compost pile when she noticed this bug crawling around in it.  Lifting up some of the old scraps revealed even more of them.  They measured 3/8" (10 mm) and required magnification for final identification as small milkweed bugs, SMB - Lygaeus kalmii.

On first glance it resembles a smaller version of the box elder bugs that swarm later in the year. They tend to migrate into the house, occasionally using their plant-sucking proboscis to puncture the skin, causing slight irritation. 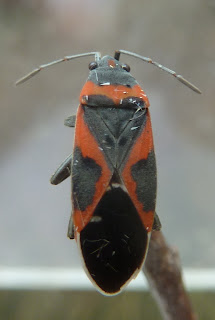 The distinctive coloration of SMB made the identification relatively easy.  It has a bright orange incomplete "X" on the back and the upper black marking is somewhat heart shaped.  The anterior edge of the pronotum (the plate covering the first portion of the thorax) has two small black spots.  L. kalmii also has a small red spot on the back of the head extending forward, visible only with magnification.

When I think of milkweed, I associate it with the poster child of lepidoptera, the monarch butterfly.    SMB feeds on milkweed seeds as well as the nectar from other forbs.  They can also predate on small insects when other food sources are depleted.

The adults lay their eggs on milkweed in the spring and the larvae require milkweed to grow.  They absorb and store the milkweeds toxin glycosides which are harmless to them but serve as a defense against predators.  Actually at least four other insects feed on milkweed without ill effect from the toxic chemical.

The large milkweed bug, Oncopeltus fasciatus is nearly twice the size and has a different pattern of the same colors.  Both the adult and larval forms feed on milkweed juice and seeds when available.  O. fasciatus is commonly used in science due to ease of rearing and ease of dissection, a trait that is probably not of significant survival value to the bug but is a boon  to science and education.


The milkweed beetle, Tetraopes_tetrophthalmus likewise stores the toxins and advertises its distastefulness.  All the above species share the black and orange aposematic coloration, as does the monarch, warning potential predators that they are toxic. After the eggs are laid on stems at or just below surface, larvae bore into stems, overwinter in roots, and pupate in spring.  The adults appear in the early summer to repeat the cycle.

Our final contestant lacks aposematic coloration.  The milkweed stem weevil,  Rhyssomatus lineaticollis, can be quite destructive of rare and endangered milkweed species.


"Adults initially feed on the apical leaves and then, after feeding, female weevils walk to lower parts of the stem and chew several sequential holes in the stem, creating a continuous scar. Females lay a single egg per hole and larvae complete development inside the stem while feeding on pith tissue."  bugguide.net

We have previously written about the Milkweed Tussock Moth.  There are lists of special names for groups of animals such as a "murder of crows."   The "official" name for the group of caterpillars is "an army of caterpillars" but I like Kevin Furth's naming of a "mastication of caterpillars."  They are enough to make crow vomit as seen in this blog.


All insects that have milkweed in their diet at some part of their life cycle are poisonous to their predators because of the toxic cardiac glycosides contained in milkweed sap.  Brightly colored or not, don't eat them!

Becky Swearingen sent us this photograph to identify a caterpillar feeding on the composite flower head of her zinnias.  We couldn't even find it until we had closeup macro views.  After zooming in on the photograph above, watch her video here to see it in action.

This cool cat is a waved-lined emerald larva, Synchlora aerata, also known at the camouflaged looper.  It decorates its back with fragments of the flower heads it eats, (Aster, Rudbeckia, Liatris, Solidago, etc.) changing its appearance depending on the host plant.  This gives more meaning to "You are what you eat."
The fresh fragments blend in with the flower head, concealing the caterpillar until it moves. 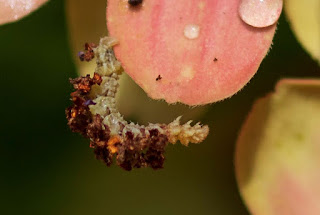 Loopers or inch worms are members of the Geometridae family, from the Greek meaning "measure the earth."  The earth may be a slight exageration but they certainly can pace off a flower head.  They come equipped with only two or three pair of legs on the back end instead of the usual five pair of other lepidoptera larvae.  They use the hooks on the front legs to hang on while bringing up their rear to clasp before stretching forward again.

The larva decorations are a unique trait among moth caterpillars, found only on
S. aerata and S. frondaria found along the east coast.  The technique is different from the bagworm moths, Psychidae, that spin their case of silk and leaf fragments, carrying it along like a light weight motor home.  There are a few other species of insects which decorate their backs, the subject of a future blog.
==============
Thanks to Phil Koenig from BAMONA for information on the genus Synchlora.  Also to Dr.  Becky Swearingen for the inspiration, the caterpillars and the photographs. 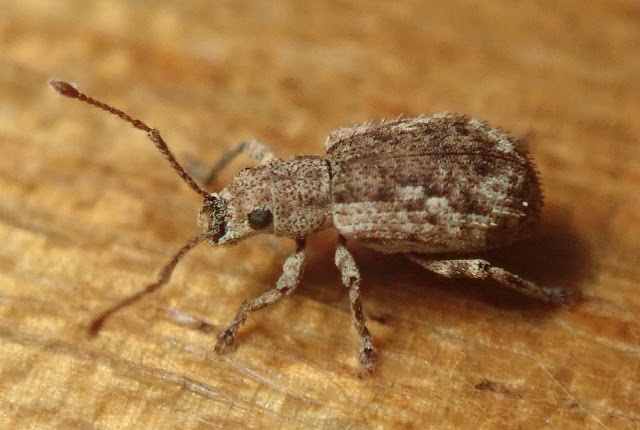 I was sitting in the family room when I saw a little 4mm brown speck slowly patrolling the coffee table. With a few macro photographs and a trip to INaturalist, I came up with the ID, a broad-nosed weevil (BNW) named Pseudoedophrys hilleri. 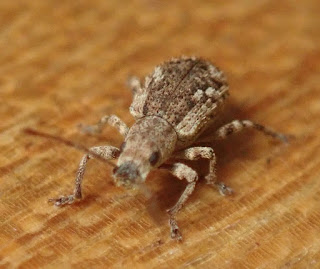 This is a species introduced from Japan, so what introduced it to our house in town?  Adults eat foliage of woody plants, especially maples and witch hazels.  I had just been photographing a dead maple leaf with an exuvia, the dried skin left when a rosy maple moth caterpillar molted.  Evidently the weevil had been laying unseen in the shell. 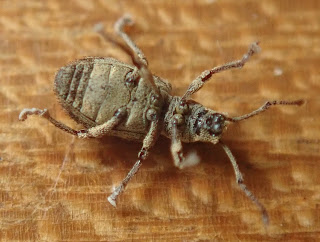 P. hilleri is a member of the beetle subfamily Entiminae, the broad-nosed weevils.  Weevils are small beetles, generally less than 6mm long, so you have to look closely at them or you will "see no weevil."*  They are herbivorous, eating a wide variety of plants and can be destructive to many crops.  The boll weevil is most famous, known in song for destroying cotton crops.

There are lots of photographs of P. hillerion on the web but virtually nothing about their lifecycle.  Ours is the first reported in INaturalist in Missouri.  Although they are native to Japan, the US distribution is predominately east coast.  Maybe they arrived when Japanese maples became a popular landscape plant?

* I bet that you didn't know that the three wise monkeys of Japanese fame have names.  "See no evil" who covers his eyes is named Mizaru.
Posted by Bob and Barb at 3:00 AM