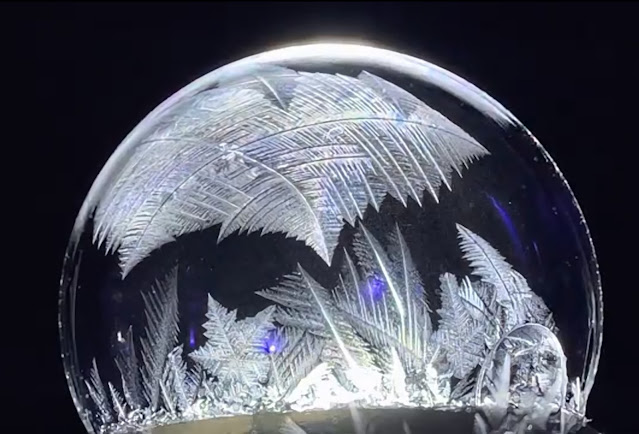 Covid has led most of us into some kind of distraction.  For Chris Barnhart, this has been snowbubbles,  creating and freezing soap bubbles and filming the results.  You can see some of the results in his Youtube snowbubble video.   If you don't want to take the time to experiment, here is a good tutorial. 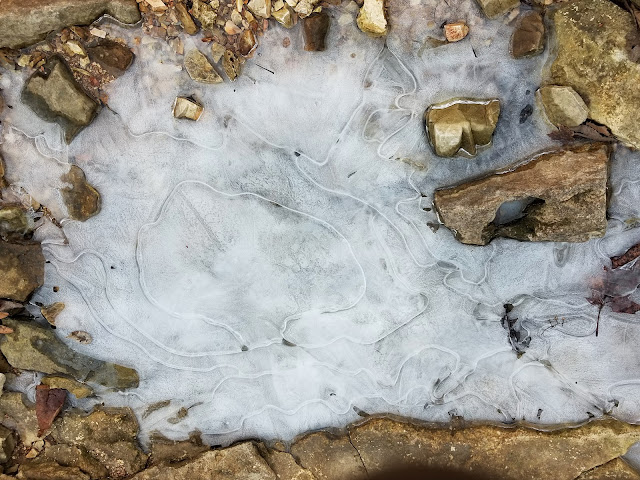 Winter ice forms in many different ways.  Above is ice left when an ephemeral stream beside our cabin stopped flowing, leaving nature's ice etching.  Hoar frost occurs when water molecules travel in the air unseen except as clouds until they come in contact with much colder frozen ground, creating these tiny icy fragments which never condensed into water.

Our personal favorite ice formations are frost flowers which we have described in numerous blogs including this one by Tonya Smith. These can range from delicate ribbons at ground level on Cunila origanoides (dittany) to projections up the stem of Verbesina virginica (wingstem/white crownbeard). 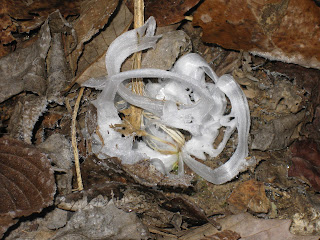 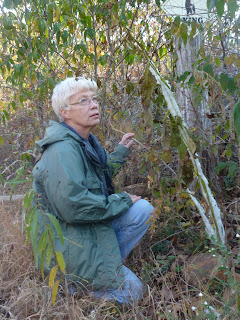 Frost flowers are only one form of ice segregation which is described at length in studies by Dr. James Carter in a paper below.  They all have in common liquid water from the soil or plants coming in contact with freezing air.

Needle ice is formed when the air temperature is below freezing and water comes up from the soil by capillary action, freezing at the surface.  More water pushes the crystals up, forming thin needles of ice.  Another example is pebble ice extruding from stones as seen below.

Hair ice extrudes from moist rotting wood in a similar fashion.  This occurs when the wood is being digested by a fungus, part on the natural return of dead wood to the soil.

Frost flowers are only one form of ice segregation which is described at length in studies by Dr. James Carter available for download here.

*Note:  The term "ice segregation" is also use to describe a process of fracturing rocks by ice described in Wikipedia. 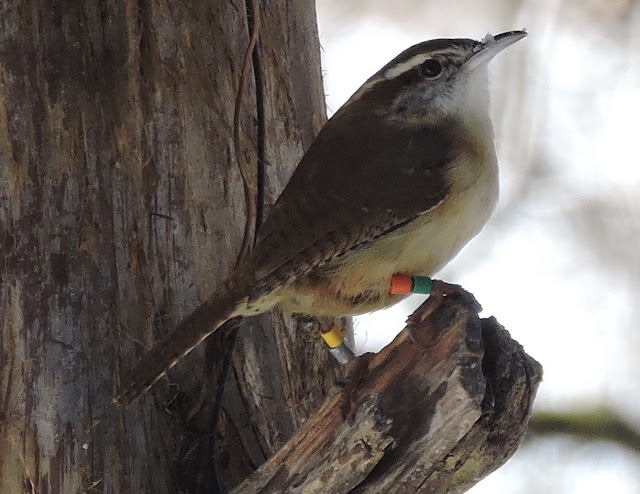 Bird identification is a weak area for me but I was confident when I photographed the Carolina wren at our feeder.  It had a long white eye bar extending back on the neck and a buff underbelly versus a white belly of the Bewick's wren.  Even more diagnostic were the decorations on its legs, identifying it as tagged by Dan Zapata who is studying them along Bull Creek.  I sent him the picture and here is his reply.

"Absolutely amazing! That is Narcissus (my favorite wren)!  I thought he was gone. I banded him, mapped his territory, but never saw him again. I thought he was predated or just left the area, but I am glad to know he is still around. He was a single wren when I banded him, I wonder if he found a mate."  He went on to say he banded it a half mile from our feeder.I asked him to describe his research.  "My study focuses on studying sex-specific territoriality in Carolina wrens. This is achieved by the use of playback experiments in which I place loudspeakers within their territories and simulate male, female, and male/female intrusions, to check how males and females respond differently to intruders in regards to sex, as a means to determine if they cooperate at deterring intruders regardless of sex or if they specifically aim to attack individuals of the same sex."

According to All About Birds "Unlike other wren species in its genus, only the male Carolina wren sings the loud song. One captive male Carolina wren sang nearly 3,000 times in a single day."  Once they hook up they "are versatile nesters, making use of discarded flowerpots, mailboxes, propane-tank covers, and a variety of other items."  This nest was on a shelf in our century old barn.

Dan is scheduled to give a presentation on his thesis work for the Greater Ozarks Audubon Society on May 19th, 2022.

Sweetheart of an Owl 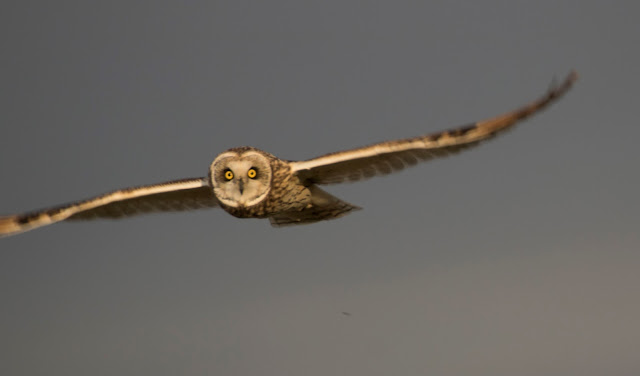 On Valentines Day 2011 we posted a blog on a short-eared owl with an eye for a heart.  With the great shot above by Becky Swearingen of another one in flight, and Ben Caruthers sending a new picture on the right of another short-eared owl looking very startled, it is time for a romantic anniversary return to them.  Ironically, Ben got the tip on where to find them from Greg Swick again! 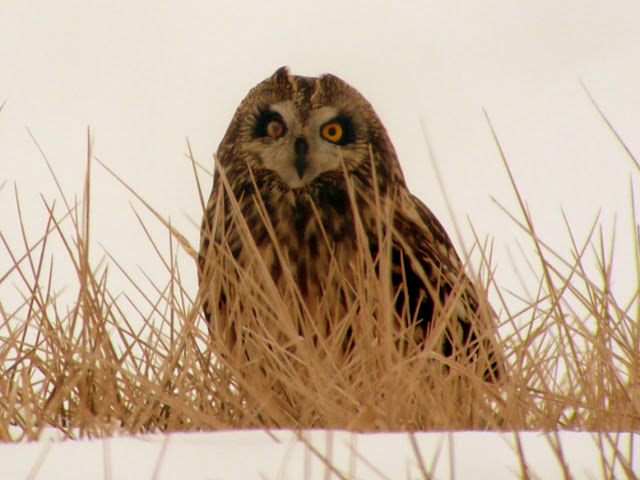 Greg Swick of Greater Ozarks Audubon Society (GOAS) sent out this picture and shared the story with me.
"Attached is a picture of a new species of owl, Asio valentinus?  We found it near Lockwood today.  Of course, it face is heart-shaped, like many owls, but the damaged pupil of his right eye is also heart-shaped.  Happy Valentine's Day, all."

This sweetheart is actually a short-eared owl (Asio flammeus), one of the many which migrate to Missouri in the winter to take advantage of the weather and hunting on the open grasslands.  I suspect they were disappointed with the recent accommodations which are more ski vacation than snow-bird stop. 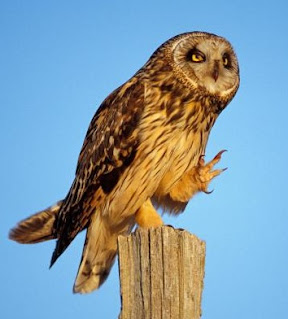 Short-eared owls have one of the largest geographic ranges of any bird, inhabiting all continents except Antarctica and Australia.  They even breed in Hawaii, the Caribbean and the Galapagos.  Their southward migration is driven as much by the search for voles and other rodents as by weather.  In some states they are listed as threatened as suitable habitat disappears.

Their numbers in our state are highest between October and April.  According to this MDC article, they favor open grasslands, and especially native prairie.  Since they roost on the ground or in low bushes, their nest sites are easily disturbed by haying or grazing.  This may be why they no longer nest in Missouri.

The Asio genus of owls have "ears" sticking up which are actually tufts of feathers.  Short-eared owl's tufts only show when they are being defensive.  Greg's owl may be showing that he is ready to defend his Valentine.

You can hear its raspy "bark" at Cornell Lab.
Learn more about our birds with GOAS.
Posted by Bob and Barb at 8:04 AM 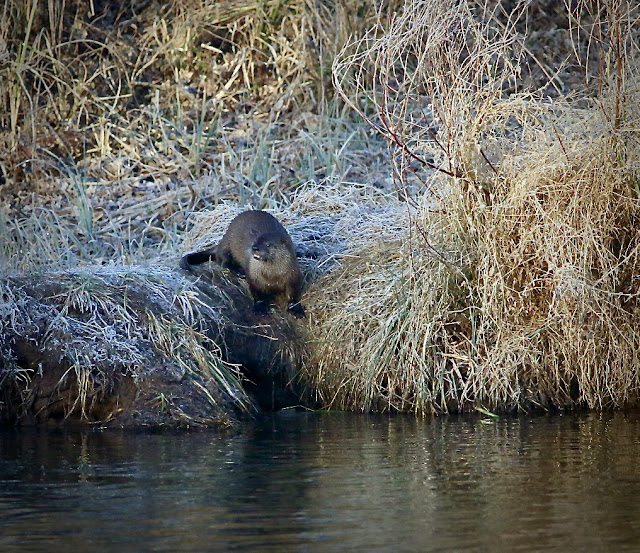 With the snow I am a little short on new finds but I just got these great pictures from my friend Dr. Joe Dorzab in Arkansas.  Since they aren't our Missouri otters, I probably "otter" not use them in our Missouri MN blog, but I am willing to cross the line just once. 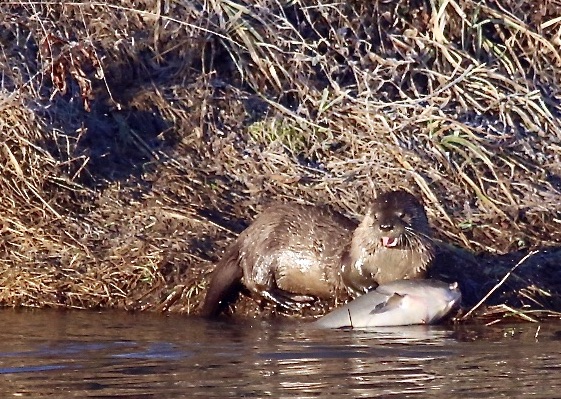 Joe is a dedicated amateur wildlife photographer and he has followed this family living in a slough in the Sequoyah National Wildlife Refuge in Oklahoma.  He usually finds them active around 8AM and they aren't shy, almost performing for the camera.  The size of fish they tackle is amazing.

Otters were once plentiful in Missouri.  Drainage of wetlands for agriculture led to loss of habitat while hunting and trapping for their furs led almost to near extirpation of otters in Missouri.

Otter reintroduction began in 1982 with 2,000 specimens from Louisiana released in Missouri and neighboring states.  With 15,000 miles of waterways in our state, they were able to spread rapidly.  They prefer waters with trees along the banks and will move to find adequate food and habitat.  With most land in private hands, they invariably found stocked ponds and landowner conflicts.  This led to the development of hunting and trapping regulations in 1996.

Wildlife damage biologists report 90% of their calls are because of otter poop on the dock at a lake.  They can eat a lot of fish but aren't likely to decimate a pond population as they will have to move on to find food before that point.

The friction between we bipedal mammals and restored native animal populations is not new.  Migratory "Canada" geese now reside year round in our parks and have the lost directions to the north.  Monitoring our expanding bear populations has led to a limited hunting season with annual adjustments in the future.

For those of us whose only otter exposure is at Wonders of Wildlife, MDC Discover Nature has a lot of information including the description below.

"River otters are well suited to life in the water. They have streamlined bodies, fully webbed feet, and long, tapered tails that are thick at the base and flat on the bottom. Their ears and nose close when they go underwater. Dense, oily fur and heavy layers of body fat insulate them in the water. They have a keen sense of smell and prominent facial whiskers that are extremely sensitive to touch.

Otters are dark brown with pale brown or gray bellies. The muzzle and throat are silvery. Males and females look alike, although males are larger. They are graceful, powerful swimmers and can remain submerged 3–4 minutes. On land, they travel with a loping gait. On snow or ice, they alternate loping with sliding."

Living with wildlife is a challenge in our society.  We  love the creatures as long as they know their place.  MDC is critical in helping maintain that balance, whether its is otters in a pond or squirrels in the attic.  Sometimes we just need to relax a little. 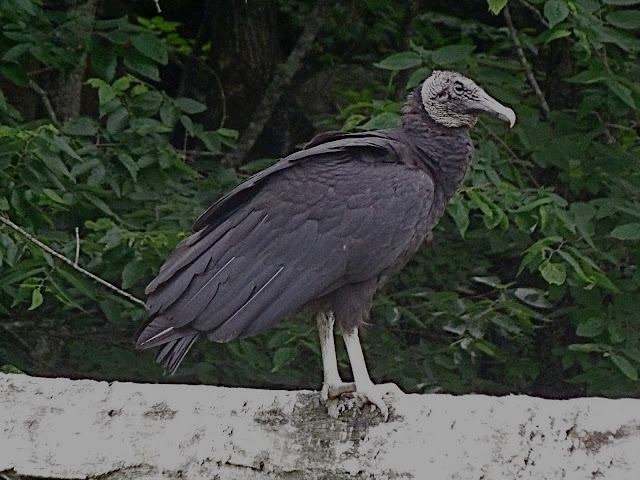 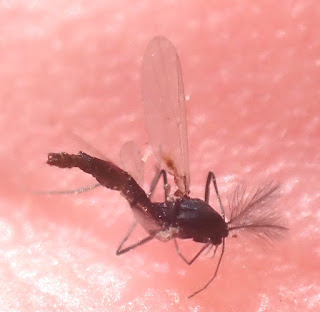 I have been short on new blog material lately.  The only interesting new finds have been swarms of midges coming out on unseasonably warm January days, a mating behavior usually scheduled for late March and April.  The only way I could catch them is by hand which squashes them too much to ID the species. 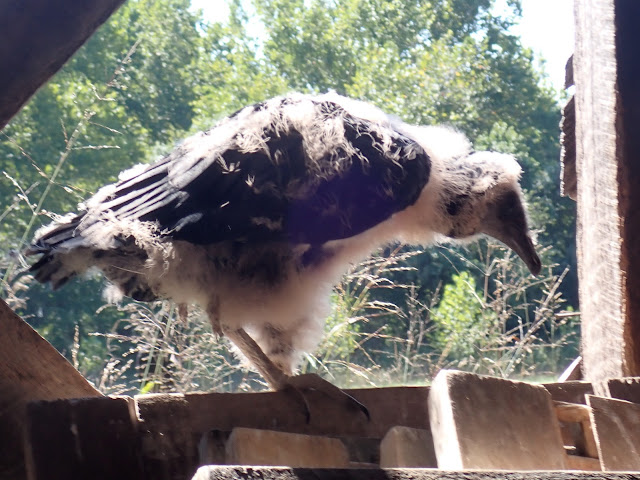 One constant finding at Bull Mills this December was the black vultures sitting on the corral rails behind our barn.  This is the 15th annual brood raised in the Vulture Obstetrical Ward (aka our 120 year old barely standing barn). Last year we didn't see any eggs or chicks and had given up on them when I suddenly saw the juvenile above, filmed in this video as it prepared to fledge.
There are several stalls which I can't open due to settling and the groundhog holes are now vulture tunnels.  Back in 2013 we wrote this blog about a vulture family raised in a hollow tree which I filmed through a two inch crack.  They hiss a warning, "I am bad and will vomit on you" as seen in this video.  How the chicks managed to get up eight feet to the open top of the trunk to fledge is beyond me. 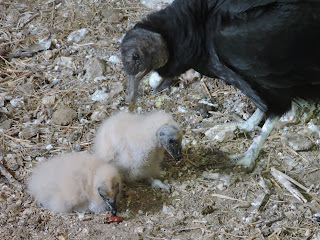 We get a better view of them in the barn each year as seen in the Now Eat Your Carrion blog.  They hiss the first few times I open the door but soon learn to totally ignore me.  The parents would initially flush out the window but later just looked bored.
Last year's fledgling wasn't quite ready to take flight when I found it so I came back a few days later for its maiden voyage.  They are still hanging around the barn on the corral rail on warm days, now without their juvenile downy feathers.
MDC Nature Calling had a great story on vultures, everything you ever wanted to know.  I found this about killing livestock interesting.

"It can be difficult to tell if a black vulture actually killed the animal it is feeding on or found it already dead. Farm animals, especially newborns, die from many causes. But black vultures sometimes do kill newborn calves and lambs. They are attracted to the afterbirth and may try to eat a newborn that is not yet able to stand and move away. Because black vultures tend to feed in groups, it can be hard for cows or ewes to scare them off, especially if they are first-time mothers."

Here is the whole vulture story from MDC.
More pictures of our annual vulture adventures are seen in this Flickr album.
Posted by Bob and Barb at 8:38 AM