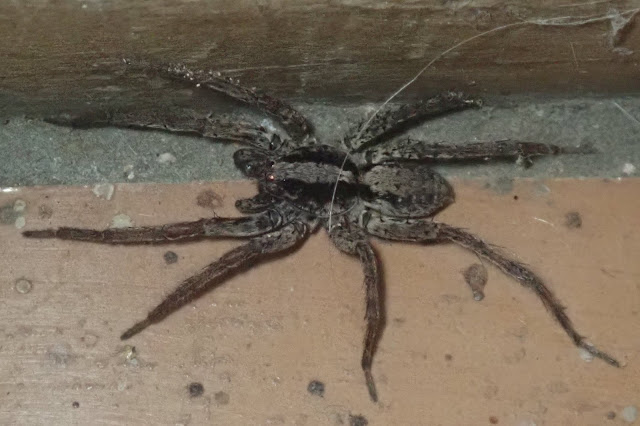 If you like puzzle solving I would suggest taking up identifying insects as a new hobby.  This spider was crawling across the kitchen floor at the creek house, carefully exploring every inch.  Show virtually any spider to a kid and they will say "wolf spider!"  I spent several hours identifying this spider and in this case the kid would be right. 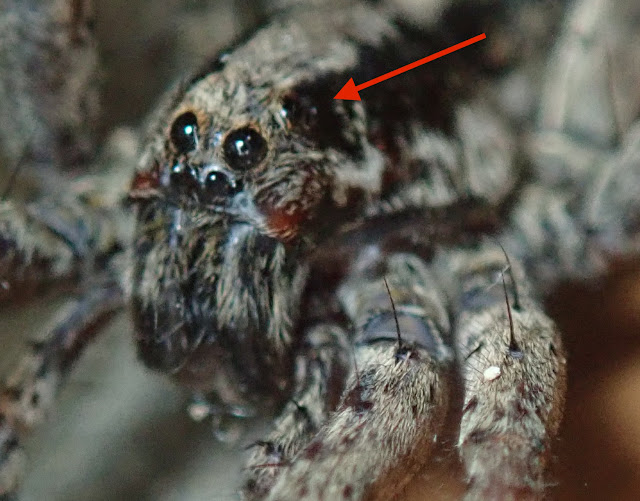 After getting it into a box, I spent a lot of time finding the right container for positioning it to photograph the eyes, the key to identifying a spider's family.*  Getting a spider to hold still for a mug shot is hard and the upper set of eyes are on top of the head.  The wolf spider family, Lycosidae, has two prominent eyes in the middle and four below like a mustache, the outer pair being tiny.  A small lateral pair above are above the "forehead" curve, hard to photograph in the same shot (see the red arrow on the reflection above).

My specimen was a male with diagnostic "boxing gloves" on the end of its palps.  Unlike our version used to batter someone, these are handy if somewhat messy, used by the spider to collect and hold its sperm until transferring them to the female during mating. 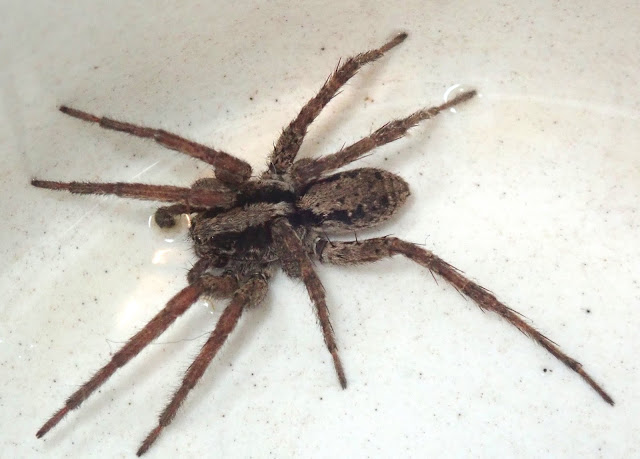 I spent a lot of time staring at Common Spiders of North America by Richard Bradley.  The drawing are excellent and I was able to narrow the search to Schizocosa species.  With few markings on the dorsal abdomen this came down to two species, S. ocreata (the brushlegged wolf spider) and S. rovneri.  Male brushlegs have dark front legs with dense hairs so this one was S. rovneri.
As I released it under the kitchen cabinet I had the satisfaction of knowing a name I would remember for a few days, like most obscure Latin taxonomy, but it was a great chase.

If you like puzzles, here is one for you from the next blog.  This is a lepidoptera photo sent by Chris Barnhart. 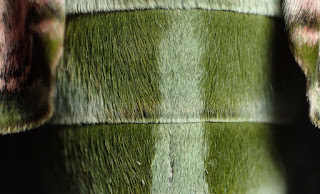 Every winter we see large flocks of American robins.  Sometimes they are moving through a forested area, other times they are in a scattered flock in hayed fields.  Saturday evening we noticed the field behind the barn was alive with the birds.

I went out with a telephoto lens to take photographs from the barn to avoid flushing them.  They were clustered tight to the ground, occasionally hopping but not flying.  I took photographs of individual fields of view and back home could count 240 plus birds, our new record for Bull Mills. 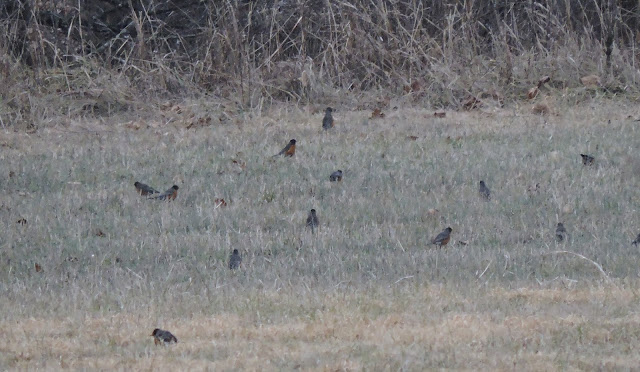 We frequently will find flocks in the eastern red cedars that cover the former glades behind the house.  They will be spread out, unlike cedar waxwings that tend to feast their way through individual trees.  Robins and cedar wax wings then help to provide the cedar "berries" (actually miniature cones) with wings, spreading them with their droppings adding a bit of fertilizer as a bonus.  Additionally cedars provide birds with good protection from winter winds at night.

Allaboutbirds says that robins have been reported in every one of the continental United States in the winter.  They disappear around our urban yards to form winter flocks ranging from 50 in the northern climes to thousands in the south.  "Usually these flocks appear where there are plentiful fruits on trees and shrubs, such as crabapples, hawthorns, holly, juniper, and others."  Our "cedars" are actually Juniperus virginiana, locally the most abundant source of fruit for birds.  Charley Burwick says, "We had several million counted on our Taney County Christmas Bird Count a number of years ago. "Who knew that he could count that high?"
Posted by Bob and Barb at 5:04 PM 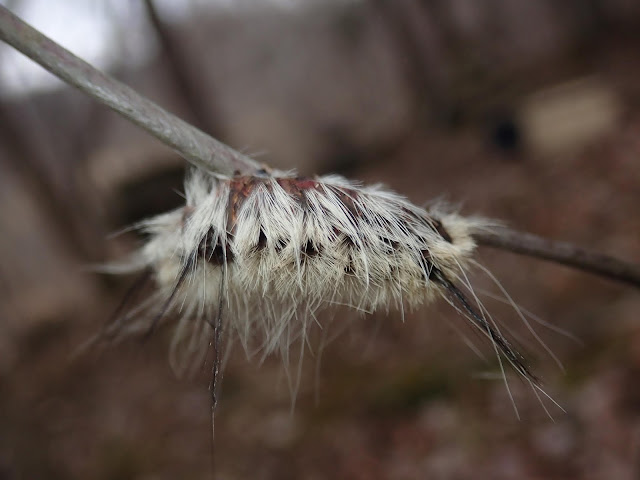 Last week we posted a blog about this dead American dagger moth caterpillar hanging on a small redbud tree.  Kevin Firth identified it and said "According to Wagner, the culprit is Aleiodes stigmator, a Braconid wasp."  This was in February and yet the caterpillar's body was hard and firmly attached to the branch.  Ordinarily a Braconid wasp parasitizing a caterpillar turns it into a squishy mass once the parasitoids have grown up and escaped.  There is one genus of parasitic wasps which leave a stiff caterpillar case, the Aleiodes sp. called the Eastern mummy wasps.

Charley Eiseman* describes their unusual behavior.  "Most parasitoid Braconid wasp larvae live in the caterpillar until they chew their way out and form pupa on the outside of the skin.  The caterpillar usually survives for a few days and in the case of one species, the caterpillar actually guards the pupa, vigorously wiggling to drive off any predators until it finally dies.  However, the Aleiodes sp. larva pupate inside of the caterpillar!"

Most Eastern mummy wasps, Aleiodes sp., tend to be solitary, one per caterpillar.  The exception to this rule is Aleiodes stigmator which is a gregarious parasitoid.  It specializes in large hairy caterpillars and may have as many as 40 larvae in a single caterpillar.  Eiseman says* "When mature they puncture the caterpillars underside to leak fluids, they dry and firmly attach it to the substrate.  The caterpillar becomes hardened and mummified.  A. stigmator chews evenly spaced exit holes on the top." 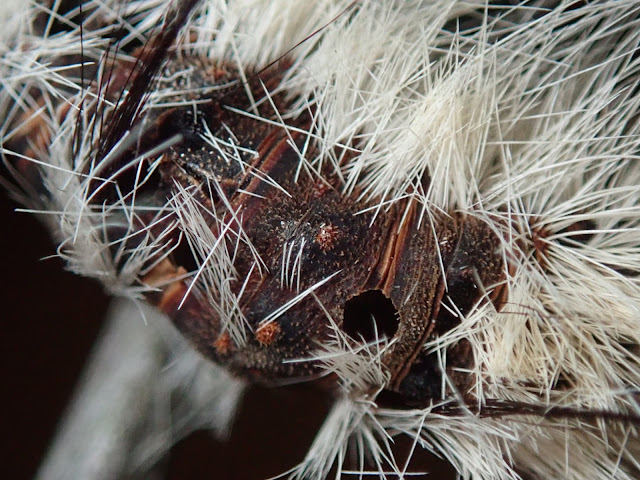 Bingo!  Our hairy caterpillar was attached firmly to the redbud twig all winter.  Once I pried it off, I could see the neat round exit holes all along the back.  I handled it gently at first but after photographing it I found that the body was hard.  It didn't break under pressure and resisted cutting with thin surgical scissors.  By pupating inside the hardened mummy they are protected from many predators.  Once the mummy was open, there wasn't anything to see except the holes.

I brushed off the hairs and could identify 11 exit holes only along the back.  This confirmed that the culprit was the gregarious Aleiodes stigmator.  Scott Shaw's bible of Aleiodes ** says that "It is not unusual for 40-50 wasps to emerge from a single mummy. The emergence holes are evenly spread across the top of the mummy, from front to back, leaving a quite distinct appearance, as though pelted evenly by shotgun pellets."  It looks like our caterpillar got off easy. 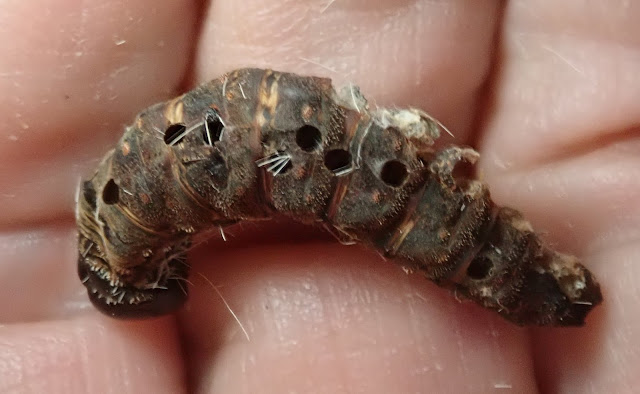 At the Nature Center's Insectorama kids can take home silk moth caterpillars to raise.  Parasitoids emerging from their caterpillar instead of its forming a pupa is initially disappointing but offers a good teaching opportunity.  In nature moths and butterflies leave large numbers of eggs to ensure survival of some of their offspring. The surplus of caterpillars feeds the birds, as well as the wasps, and they in turn and in sum prevent the redbud trees from being destroyed by all those hungry caterpillars. Aleiodes sp. also parasitize several well-known forest pests such as the gypsy moth, eastern tent caterpillar, forest tent caterpillar and fall webworm in addition to more benign tussock moths, dagger moths, prominents, and loopers. This is all part of the web of life that provides for our own survival, and entertainment.***

One last interesting historical tidbit. Aleiodes stigmator was the first of its genus to be identified.  Thomas Say, the father of American entomology described it in 1824.  He  thought the exit holes looked like the stigmata in the hands and feet of the Christ, thus the stigmator name.

*    Tracks and Sign of Insects and other Invertebrates, Charley Eiseman and Noah Charney.
**  Alleiodes Wasps of the Eastern Forests: A Guide to Parasitoids and Associated Moth Caterpillars. Scott Shaw
*** With thanks to Chris Barnhart.
Posted by Bob and Barb at 3:00 AM

I found this mummy of a dead caterpillar hanging on a small redbud tree outside our house on February 3rd.  I sent the picture to Kevin Firth who responded, "If I had to guess, I would say an American dagger (AD), Acronicta americana. You can still see the remains of the black hair pencils. We went on a hike last fall at Ha Ha Tonka State Park and found several mummified cats on redbud. According to Wagner, the culprit is Aleiodes stigmator, a Braconid wasp."

By coincidence we had found two white A. americana caterpillars on the underside of leaves on the same redbud tree back in 2014.  I prepared a blog but never posted it so here it is.

The American dagger like other owlet moths is relatively drab unless you focus closely on the wavy lines and black dots that form a distinctive if subtle pattern.  The larvae on the other hand are covered with fine yellow setae (hairs) that may turn white with age.  There are thicker black tufts of setae on the first and third segments.  The fuzziness invites petting, BUT DON'T.  The AD is one of several caterpillar species which are covered by venomous hairs that can penetrate the skin and break off, causing a burning/itching sensation described by Kevin in this blog last year.

These AD larvae feed on the leaves of a variety of popular neighborhood trees like oak, ash, elm, redbud, willow and maple and then crawl onto the ground to pupate so they commonly are found by children.  A good rule to teach kids about hairy caterpillars is "look it up before you pick it up."

I raised the 2014 larvae above on redbud leaves and they pupated a week later.  The American dagger usually forms a dense silk cocoon by burrowing into wood and may combine soft rotting wood into a silken cocoon, so I put some old sticks in with the sphagnum moss in their box.  One produced the standard cocoon while the other one was covered with dried moss and twigs.

As I was gently transferring a cocoon in the palm of my hand it to its winter home, I felt it move slightly.  I had seen this in a Luna moth pupa so I laid it on a leaf and gently pressed on its tummy and recorded this video.

What was particularly fascinating about the dead caterpillar above was its  mummy, retaining its color, shape and structure in death.  Most parasitized caterpillars simply turn to goo.  This is the subject of the next blog so stay tuned!

During our recent stay in Berkeley, California, we noticed tiny little ants measuring 3mm that would scout both the bathrooms and the kitchen sink, apparently coming in along the plumbing.  They were few in number but very regular visitors as though they hadn't found what they were looking for.  I sent a photograph to Dr. James Trager who identified them as Linepithema humile, a.k.a. the Argentine ant.  He calls them "the invasive ant that ate coastal California."  Internationally they are ranked in the top 100 animal invaders.

Antwiki describes this ant as one of the most well known of the invasive ants.  They form "supercolonies" such as the Very Large Colony, which extends from San Diego to beyond San Francisco, may have a population of nearly one trillion individuals.  "They have been extraordinarily successful, in part, because different nests of the introduced Argentine ants seldom attack or compete with each other, unlike most other species of ant. In their introduced range, their genetic makeup is so uniform that individuals from one nest can mingle in a neighboring nest without being attacked." Wikipedia

Our Berkeley ants seemed to be roaming around on the sniff with no apparent trail or followers.  Recent ant research describes ant navigation techniques, summarized in this NY Times science feature.  Go straight to the video at the top which says it all.

Warning!  If you go to the bottom of the page you will be dragged down a rabbit hole (make that an ant hole) of fascinating articles about ants that have farmed fungus for millions of years and ants that explode to repel invading ants in their colony.