We have all probably seen these discolorations on a leaf.  At that point we have either walked on or said knowledgeably "leaf miner," and then walked on.  Below is a great way to learn more about them from the expert, Charley Eiseman. 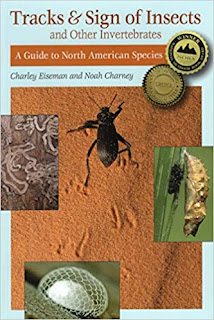 I first came across Charley when I became interested in plant galls and discovered his bible of natural signs in nature, Tracks & Signs of Insects and Other Invertebrates.*  It is full of interesting finds that continue to make me focus on the macro world.  If this sounds like a commercial, I plead guilty.
I run into his work everywhere, whether responding to a finding on INaturalist or contributing 10,892 photographs on Bugguide, all for free use through Creative Commons.  He is a member of  a community of fellow "macrophiles" and amateur and professional entomologists out there who are willing to give us junior members help as needed.
While photographing a velvet mite,  I saw these scars on top of a frostweed leaf.  I had always assumed that they were caused by something browsing the epithelium but it turns out to be something much more interesting. They are made by tiny larva living between the upper and lower leaf epidermis, tunneling and pooping a faint trail of dark frass.  Depending on the species, they may occur on the upper or lower surface, sometimes on both.  Eventually they emerge, leaving through a small exit hole which you may see under magnification.


A leaf miner is any one of numerous species of insects in which the larval stage lives in, and eats, the leaf tissue of plants. The vast majority of leaf-mining insects are moths (Lepidoptera), sawflies (Symphyta, close relatives of wasps), and flies (Diptera), though some beetles also exhibit this behavior.  Wikipedia 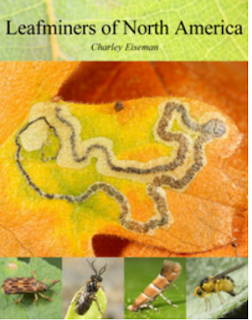 Lately Charley has plunged into the world of leaf miners.  There are over 2,000 species of leafminers and since most are plant specific you have a good chance to identify them by their tracks.  If you want to pursue leaf miners beyond the Wikipedia reference, Charley has just published Leafminers of North America.  It is 1857 pages long (plus a 54-page table of contents, 20-page glossary, and 68-page bibliography), illustrated with thousands of color photographs.  To prevent injury to the UPS delivery drivers it is only available as an ebook but it is a great reference.  "Abandon all hope, ye who enter here" for I have sampled the incredible deep dive into my copy and it is hard to emerge.

Now he has done it again.  He has a 78 minute webinar, an introduction to leafminers at this Youtube link.  If you find it as interesting as I did, you might consider signing up for a series of webinars through August where he will be walking us through the identification of leaf miners, no hard hat required.

"If you're interested in an interactive webinar that will help you become more comfortable using the book's keys, you can register for that here:

The course flyer will be available at the above link any day now, but for now I've copied and pasted the description below.

The first session will include a slide show/lecture providing an introduction to leaf and stem mining and other modes of herbivory; an overview of mine classification; and a discussion of methods for photographing, collecting, and rearing miners. In between classes, participants will photograph and/or collect leaf and stem mines and attempt to identify them using the hostplant-based keys in Leafminers of North America. At each subsequent meeting, we will discuss what people have found, working through the keys together for any mines that have caused difficulty. This will ideally be done by sharing digital photographs taken ahead of time, but for some specimens live sharing via webcam may be possible. Shortly after each meeting, the instructor will provide a list of relevant passages in Leafminers of North America to read that will reinforce what we have covered together.=====================
*He and Noah Charney wrote Tracks & Signs of Insects and Other Invertebrates which is an indispensable book for those who wander through nature wondering "what made that?" be it a gall, egg case, pupae, exuviae or an engraving left by an insect.
Posted by Bob and Barb at 5:55 PM 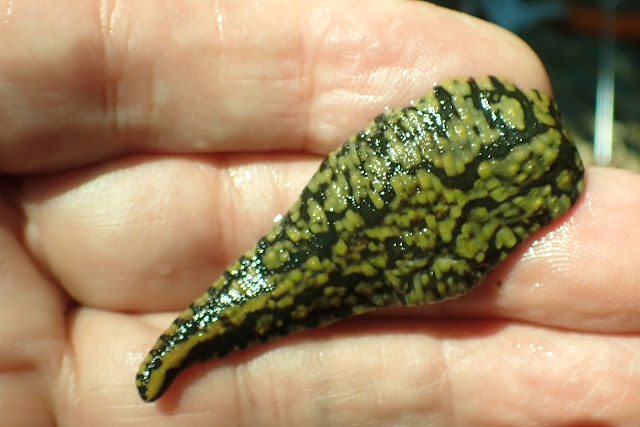