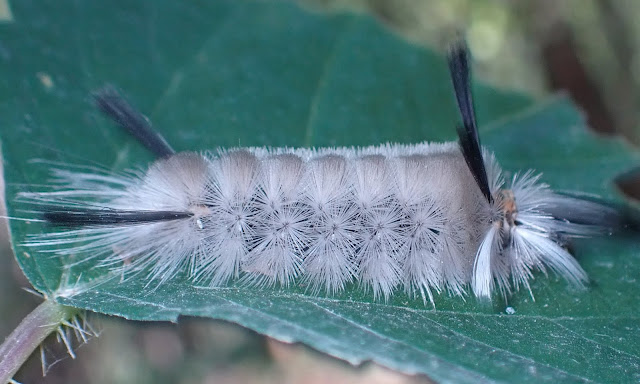 One of the stars of the field trip last Friday was this cute little hickory tussock moth, (Lophocampa caryae).  We found them on a variety of leaves, conveniently placed at the height of a WOLF Student.  The name is a bit confusing as it's host plants are hickory, pecan and walnut, but they will also feed on ash, elm, oak and willow.

They are really cute when they first emerge, all yellow and juicy as captured by Charlie Eiseman.  Like most caterpillars, they munch on their eggshells to get a quick snack before eating their veggies.

Now they get serious about their leaf diet, clustered together munching until there is a mere skeleton remaining.  Later instars wander off and are solitary like the ones we found today.  They will feed until ready to pupate in the fall.

While it looks cute and fuzzy, don't pet it.  The hairs cause a rash (called a contact dermatitis) in many people.  It is caused by a urushiol oil similar to that produced by poison ivy.  In addition, those hairs have microscopic barbs and if you get them on your hands and touch sensitive tissues like your eyes it can cause serious pain.

Soon these caterpillars will wander off to form a cocoon where they will spend the winter in the leaf litter of the forest floor.  The adult moth will emerge in May, seek a mate and lay the eggs that complete the circle of their life. 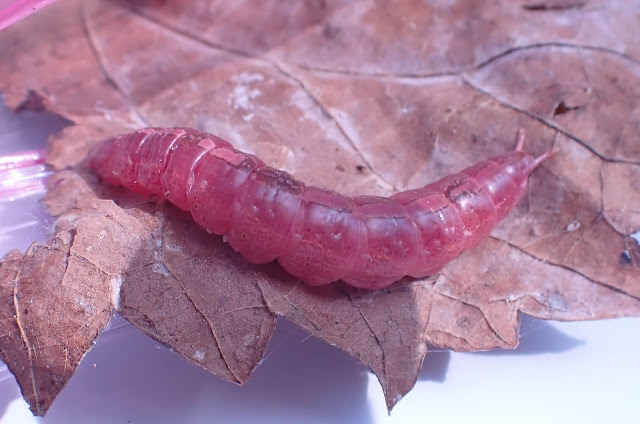 This red caterpillar led me on a long chase for an ID.  My friend Ben suggested it was a soft fishing lure from Bass Pro but he hadn't seen it move.  INaturalist called it a drab prominent moth larva (Misogada unicolor) but all the initial photographs of caterpillars I found were light green with tan or white racing stripes.  They did at least have the same dual exhausts! 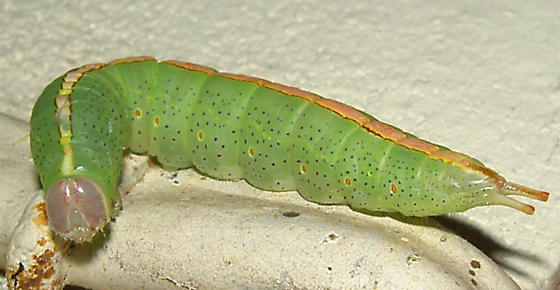 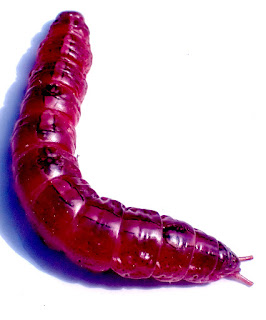 Diving further into photographs in Bugguide I finally found some red lookalikes.  Apparently the caterpillars turn color when they are ready to pupate.  Looking closely at my photograph you can make out the pale racing stripe remnant down the back.  Measuring close to 2", it was a dramatic find.

The name "drab prominent" describes the moth perfectly, so unremarkable that I forgot I had photographed it at the porch light at Bull Mills in 2018.  According to Bugguide, bronze scales on the tuft of the head are diagnostic in distinguishing the adult of this species as seen in the example to the right.  Their host plants are cottonwood and sycamore which is what we found this one on.

Finally, Misogada is a monotypic genus, meaning it has only one species.  That is my new word of the day. 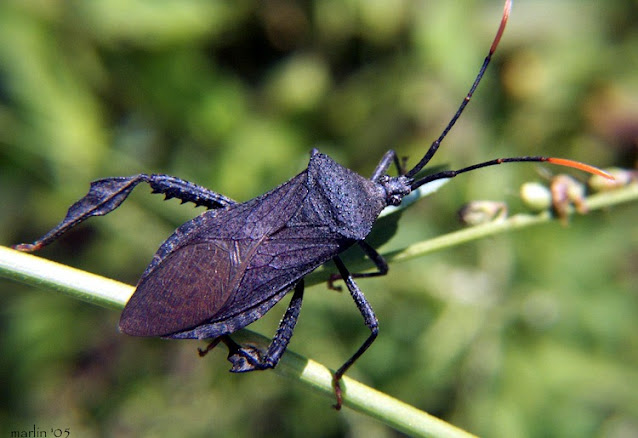 Several of these insects were found by WOLF students on Friday's field trip.  This is the very common and distinctive Acanthocephala terminalis, the leaf-footed bug (LFB).  The genus name comes from the Greek akanth 'thorn/spine' and kephale 'head', and refers to the spine on the front of the head.  Terminalis comes from the bright yellow-orange terminal segment of the antennae.  The "leaf-foot" is obvious on the hind leg tibia. 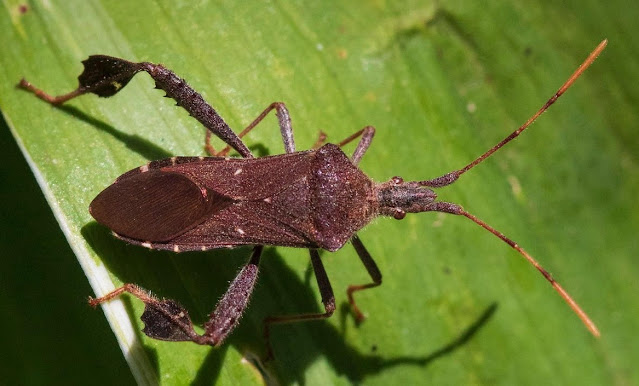 LFBs are commonly found on shrubs in the woods or field edges.  Nymphs and adults suck sap from various native plants, but unlike squash bugs, they don't harm our cultivated plants.  They are also found on bird droppings which they probe with their long proboscises.  This may be for nutrition or simply a case of bad taste. 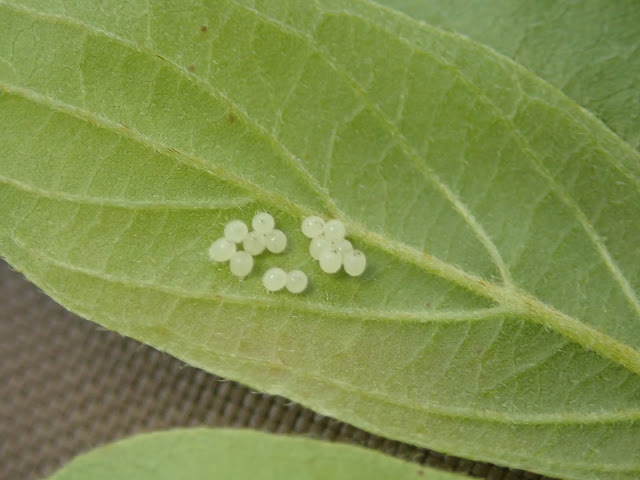 They overwinter as adults, mating in the spring and leaving clusters of eggs on leaves.  I found this small cluster of insect eggs on the underside of a leaf several years ago and stored them safely in a bug box, hoping to film their births.

I gently moved the eggs onto the sticky part of a post-it note for handling.  We watched the eggs daily and noticed a change in color on day 16.  They were a little cloudy and had developed some red streaks.  This was a sign on maturation of the larvae.

The eggs are so translucent that you can actually make out the body and curled up legs in the photo by Tonya Smith.

By the next morning the little stinkers had emerged overnight so I couldn't video the birth.  Now we could see the eggs with a lid cut out by the nymph.  The first instar is very distinctive with orange streaks that we had seen through the translucent eggs the day before.

I was amazed that an infant that size can emerge from a tiny egg overnight, but my wife reminded me of how compact our children were packaged before she gave birth.  Once the bodies of these unfolded their size was mostly the gangly legs.  There are even better photographs on Buggtracks.

The upward curve of the abdomen is common to a lot of different bug nymphs such as assassin bugs.  They go through 5 sequential molts. The later instars of LFB darken and develop a spiny back.  As all hemiptera (true bugs) they have incomplete metamorphosis, the nymphs resembling the adults.  There is a series of pictures of one molting at Bugguide.  The one on the right was initially misidentified as an assassin bug nymph.


Unlike beetles with their chewing mouth parts, bugs have a proboscis that resembles a hypodermic needle. Their feeding is more complex than just sucking up juices. They first inject their saliva with enzymes into the tissue, then suck up the digested liquid. Assassin bugs attack insects and other prey, while plant bugs like our LFB suck the juices of leaves and fruit. Although some leaf-footed species can be listed as agricultural pests, our LFB (A. terminalis) is not a problem.

It can be difficult to separate some plant bugs from their assassin bug brethren so it is best not to pick them up with bare hands if you aren't sure. 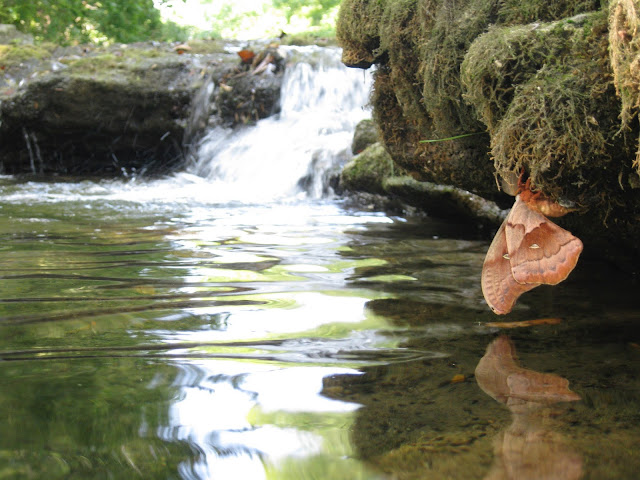 My granddaughter spotted this Polyphemus moth, clinging below a rock shelf by a little waterfall. It was in the shade all day, had a cooling mist off the waterfall and was out of reach to most of its normal predators.  Its wingtips were barely an eighth of an inch above the water but the view must have been worth the risk.  This was 10 years ago without a waterproof camera but the shot was worth the risk.

This moth probably was tired after a long night of courting.  Unlike most other lepidoptera, its lacks a functioning digestive system and never feeds.  It exists to breed and lives only six days, so it probably earned a rock with a great view.


Polyphemus, Antheraea polyphemus, is the second largest moth in Missouri.  Named for the one-eyed cyclops giant in Greek literature, it has a single large eye spot on each hind wing.  Wikipedia gives a lot more information on these giant silk moths 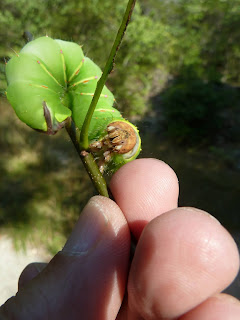 A Polyphemus moth caterpillar can eat 86,000 times its weight in a little less than two months!  Chris Barnhart raised them for the Butterfly House and Insectorama, a prodigous task as seen here.

They have several broods between May and August, its caterpillars feasting on 20 different tree species including maple and oak.  The caterpillar usually wraps a host plant leaf around its cocoon.

Males can be distinguished by their feathery antennae,  which are more plumous than the females.  Yes, I know- I had to look it up too- its Latin for "full of down or feathers".  (see photograph below)

The females emit pheromones which the male can detect through its large, plumose antennae.  The pheromones are released at a species-specific time, referred to as the "calling time". This “calling time” can help prevent moths with similar pheromone chemicals from finding the wrong mate.  (MDC)  Polyphemus' calling time is between 11 PM and 1 AM, and again from 3 AM to dawn.*

Males can fly for miles in order to reach a female. After the moths mate, the female spends most of her remaining life laying eggs, while the male takes off and may mate several more times.  Editors note: No surprise there!

This year the Insectorama was cancelled due to Covid.  With 40 + cocoons and no one to give them too, we distributed them to WOLF School students to raise and release.  One of the students noticed that after emerging, a female moth began laying eggs.  Unmated females will deposit eggs after a while and with their short life span they are unlikely to get a second chance at mating.

These eggs look at first glance a lot like a hamburger, possibly because I am hungry as I write this.  The upside down egg on the right shows the ragged dark ring where it was glued to the surface of the cage.  Thanks go to Kapri for bring me the find. 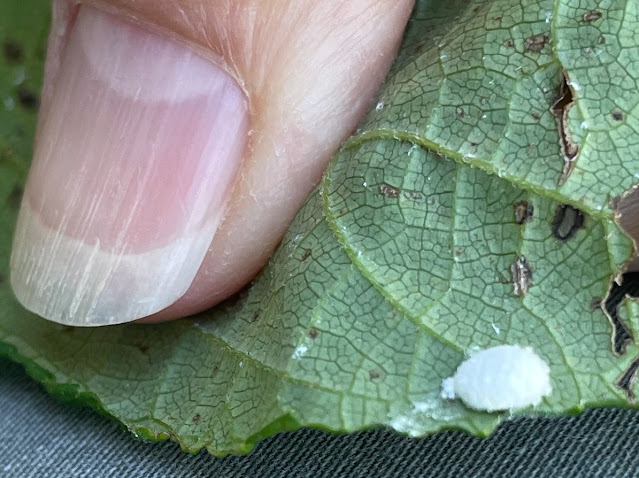 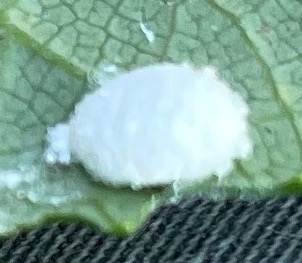 Once again Gala Keller sent me down a rabbit hole.  This began innocently enough with the photograph above of a white spot on a leaf.  Even seen close up with a cellphone photo, it is hard to identify but INaturalist suggested it was a larva of a Planthopper Parasite Moth. 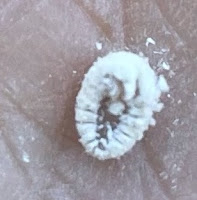 Turned over in her palm, it isn't any more impressive but it does resemble the better examples on the internet.  The one below is a better view.  If you still aren't convinced this is a larva, watch it wiggle its legs in Gala's video. 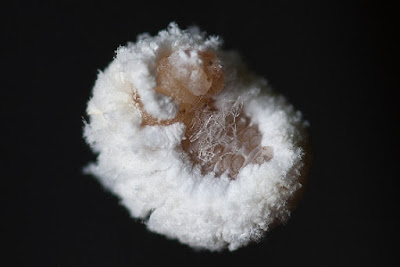 The Epipyropidae comprise a small family of moths. This family and the closely related Cyclotornidae are unique among the Lepidoptera in that the larvae are ectoparasites, the hosts typically being fulgoroid planthoppers, thus the common name planthopper parasite moths. (Wikipedia)

That is a lot of blog for a little fluff.