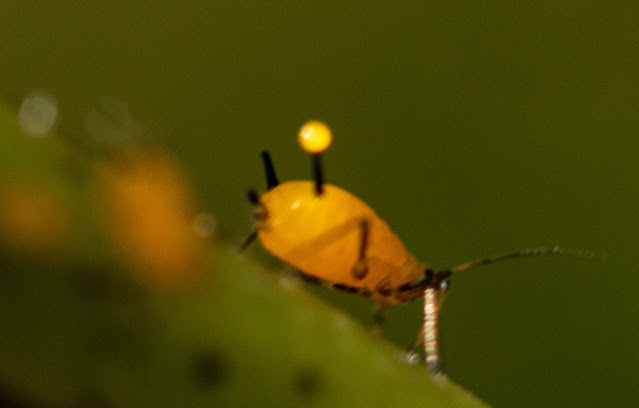 Ben Caruthers sent me some photographs of aphids on his milkweed.  The picture above was particularly interesting as it showed the aphid extruding wax from its cornicle (corn-ick-L).  Another name for the organ is siphunculi, and yes, Googling can tell you how to pronounce it.  Note to self- must get out of the house more often.
Cornicles are the little tail pipes on the rear of aphids.  Initially thought to secrete the sweet sticky honeydew so beloved by ants, we now know that they put out a substance called "cornicle wax."  These droplets are a quick-hardening defensive fluid containing triacylglycerols.  Muscles at the base squeeze the fluid out like an eyedropper, as seen in this Youtube clip.

"A.F.G. Dixon was one of the first to propose a defensive function in 1958. A 1967 paper published in the journal Nature, “Defense by Smear” by John S Edwards more fully described the defensive function of cornice secretions. Edwards had collected aphids from the field with parasitoids stuck to the cornices. In laboratory observations, he noted that poking an aphid would induce it to release a droplet from the cornicle on the side that the poke was received. He found that droplets collected from aphids quickly crystallized. The droplets were capable of immobilizing predators." Living with cornicles

As you might expect the types of lipids that are excreted differ among aphid species.  Some have proven to be alarm pheromones that send a signal to other aphids, causing them to drop from the plant to safety.  We discussed the pheromones at length in this past blog  Since then a lot more information has become available, some of which is in this blog.

Everything else you might want to know about aphids is compiled in this link.

The Case of the Yellow Feathers 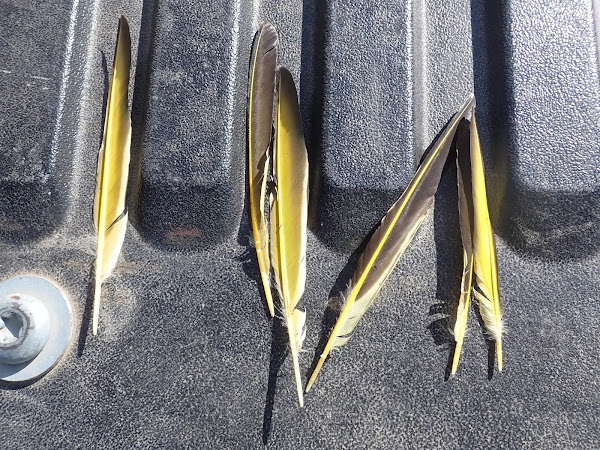 I found these feathers in a recently burned grass field, scattered with a lot of downy feathers.  They were 5-6" long, too big for a goldfinch.  I sent the question to my bird detective, Dr. Jay McEntee at MSU.

"Those are Northern (yellow-shafted) Flicker flight feathers! I believe flickers are the only birds in North America that deposits carotenoid-based colors in the feather rachises (the shafts). Carotenoids are used to make bright red, oranges, and yellows. So carotenoid pigments are what makes the red in a cardinal's feathers." 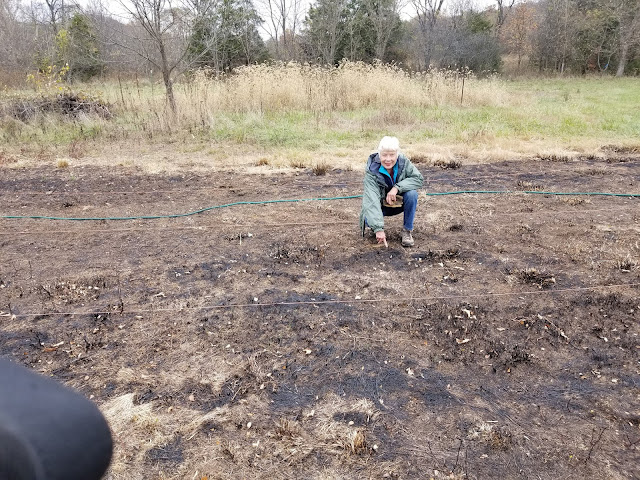 All the feather and down was within a three foot circumference in the middle of the blackened grass stubble, which looked like the kill site.  There wasn't any disturbance in the periphery and the flicker should have seen any attacker coming unless it was from above.  My guess was a Cooper's Hawk and I was back to Jay,

"I've seen Cooper's Hawks take woodpeckers before - they are a very likely culprit as you suggest. A flicker is a really substantial meal. They're surprisingly big "in the hand." Also, flickers like to eat ants, and the fire might have created some disturbance for underground ant nests that brought more to the surface. So as a natural history story, that all hangs together very well, in my opinion."

I had seen ants and a few small beetles in the blackened stubble which probably caught the eye of the victim.  Our Northern Flicker is a woodpecker that isn't afraid of getting its beak dirty.

"They eat mainly insects, especially ants and beetles that they gather from the ground.  Flickers often go after ants underground (where the nutritious larvae live), hammering at the soil the way other woodpeckers drill into wood.  Their tongues can dart out 2 inches beyond the end of the bill to snare prey." Cornell Lab 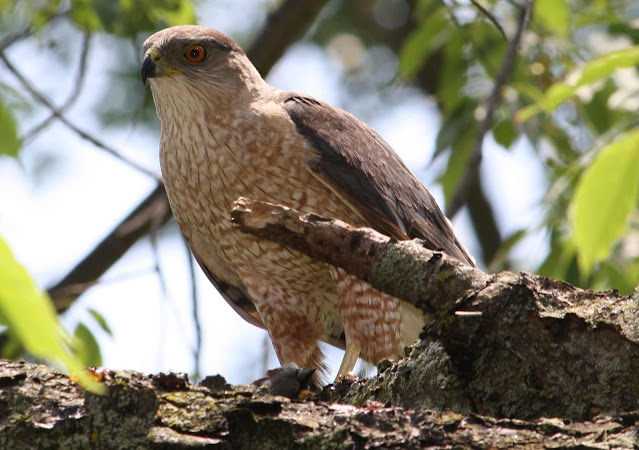 All About Birds says this about Cooper's Hawk.  "Cooper’s Hawks mainly eat birds. Small birds are safer around Cooper’s Hawks than medium-sized birds," and goes on to list the Northern Flicker as a common victim.  Feeding in an open blackened field was risky behavior.  I can't prove that a Cooper's was the perpetrator but I would consider it justifiable avicide, just what it does for a living, filling its role in the food web. 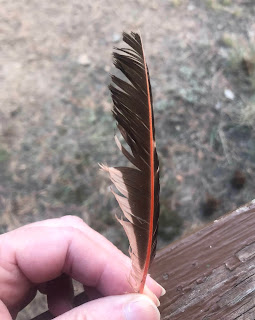 Becky Swearengin shared this flicker feather from Estes Park in September.  The red shaft is a sign of the Western subspecies.  "The western red-shafted flicker (C. a. cafer) resides in western North America. It is red under the tail and underwings and have red shafts on their primaries"  Wikipedia 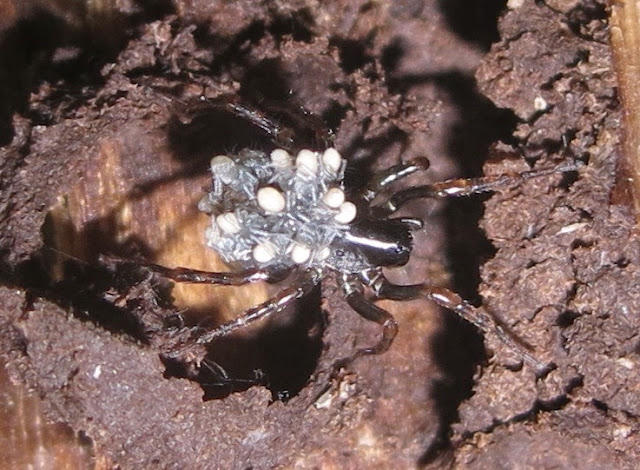 Mark Bower sent me this photograph of a spider carrying babies on her dorsal abdomen. The only spiders that do that to my knowledge were wolf spiders and I couldn't find a black shiny wolf spider in any of our books. I sent the photo off to experts and got this response from David Bruns from MDC at Powder Valley Conservation Nature Center. 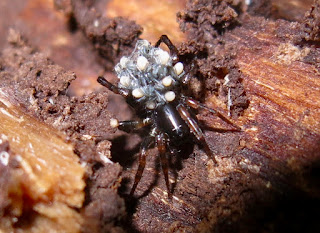 "Female wolf spiders are the only spiders I know of that carry their young on their abdomen.  More than 40 species of wolf spider have been documented in Missouri. They are an incredibly important group of spiders because of their abundance, particularly in forests, where they eat countless insects that can damage trees and plants.  They are considered harmless, meaning that they do not have venom that is medically significant to humans."

The photo is of a female Allocosa sublata. This species is recognized by its medium size, (as spiders go), the shiny black carapace, and dark rings that can be discerned on the tibias of the legs. This is an uncommon species in Missouri and the photo is extraordinary since it captured one with spiderlings which remain with the mother for only a few days. The mother does not provide direct care to the young, but provides protection from predators (particularly other wolf spiders) and serves as a mechanism to disperse the young. These will overwinter in the leaf litter as young spiders.

You can compare David Bruns' photograph above with this full description in  Bugguide. 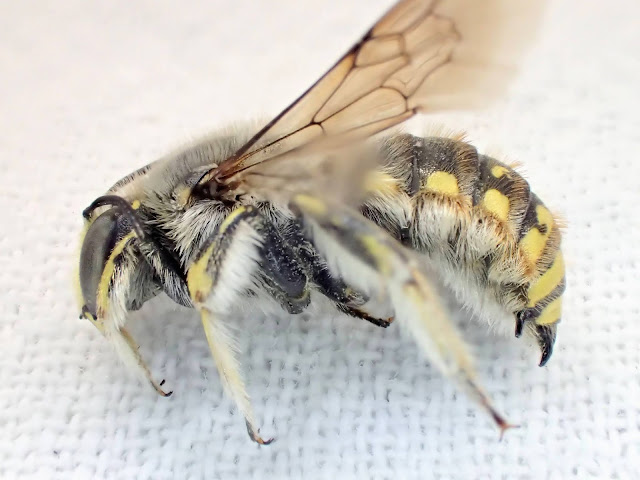 Chris Barnhart sent me photos of another invasive species he filmed at the Botanical Center. It’s the European wool carder bee Anthidium manicatum. A native of Asia, Europe and northern Africa, it was accidentally introduced into North America in the 20th century and has become a pest in some regions. It has been labeled "the most widely distributed unmanaged bee in the world."

The males are very territorial, and attack other bees foraging in what they consider their territory. They have five sharp spines on the last segments of their abdomen which are used while defending their territory from other bees. (see photo above) There is concern that they might damage bumblebees and other native pollinators. Chris got this cool video of the carder male attacking which is at this Youtube link. 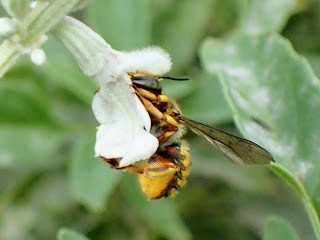 These are solitary, cavity-nesting bee species in the family Megachilidae, a family whose members include the mason and leaf cutter bees.  The name "carder" comes from their behavior of scraping hair from leaves such as lamb's ears.  Females have large mandibles with sharp teeth used for collecting and manipulating plant trichomes (hairs) for their brood nests. They also have short, dense, compact setae on their lower legs (the basitarsi) which help to organize the collected plant fibers into a ball. They then carry this bundle beneath their bodies to be used as a nest lining. (Wikipedia)

There are more anatomical details at Featured Creatures including what impact they may have on our natives species.  Carder bees tend to be more common in urban settings which tend to have more non-native flower species that they may be more adapted to.  The amount of damage they cause from injuring bees, pollinating and spreading non-native plants and reducing bumblebee populations by aggressive competition is an ongoing question. I found this dangerous looking critter in 2017 and sent it to Bugguide, tentatively identified it as a horntail wasp in the family Siricidae.  Now three years later I got a response that it is Sirex sp.  Close enough for me.

Horntails are in the order hymenoptera like bees, wasps ants and the sawflies we recently discussed.  They are xylophageous, meaning that they are herbivores that eat wood.  That spike at the rear end is the ovipositor, an impressive drill that bores into the tree and deposits an egg and a fungus.  Wikipedia describes it for Sirex noctilio like this:

"...as stiff and straight as a needle, polished black, with slight notches in the pointed half. It is hinged, to permit of its being turned at right angles to the body. . . the female selects a tree that is not too healthy, and settles on the bole; then, turning down her boring instrument on its hinge, she drives it through the thick bark to the solid wood."

When the egg is inserted into the wood it is accompanied by a fungus that will digest the wood.  Like many xylophageous beetles like the ambrosia beetle, the horntail has mycangia, pits that nourish and carry the fungus to where it lays the egg. insuring a food supply for its young.

The larvae hatch and begin tunneling through the wood for up to two years.  Toward the end of their larval phase they dig their way up close to the bark before pupating.  Once they emerge they only have to dig their way to the surface to fly away and mate.

I don't have a species identification of our Sirex but it isn't Sirex noctilio.  This is the European wood wasp, a serious invasive species which causes the death of many pines in the Northeastern US.  It hadn't  reached Missouri in 2013 when MDC Discover Nature warned about its possible approach. 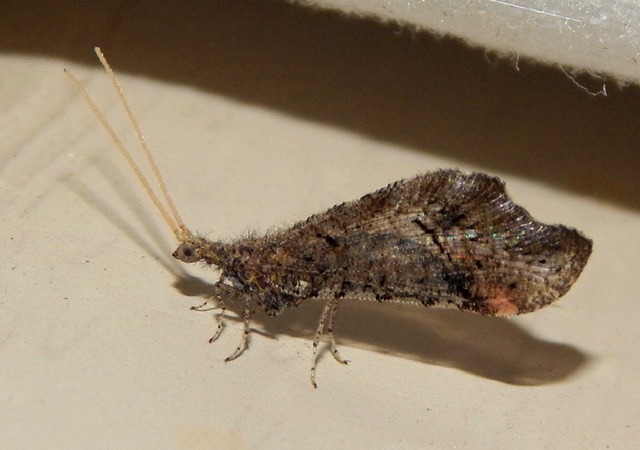 Kevin Firth, my caterpillar guru sent me these photographs, asking "Do you know anyone who's into Neuropterans?   I found this at the porch light this morning, some kind of beaded lacewing (Lomamyia)."  I knew this was out of my league so as they say in Breaking Bad, "I know a guy what knows a guy.....", in this case several guys I sent this on to.

My resources quickly narrowed it down to Lomamyia flavicornis or L. banksi, the only two species occurring in Missouri.  David Bowles settled on L. flavicornis.  The common name is yellow-horned beaded lacewing. 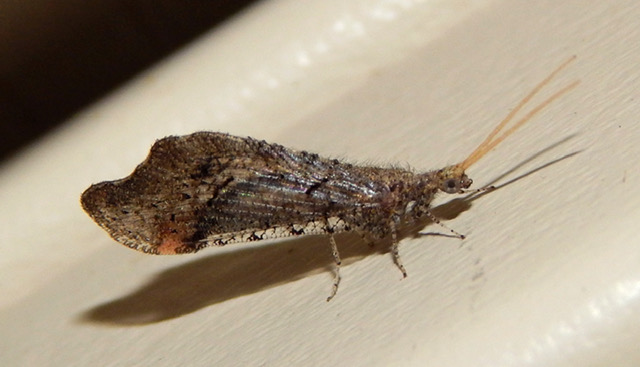 Lomamyia is a genus of beaded lacewings in the family Berothidae.   Some species have a unique method of capturing their prey that warms the heart of this retired gastroenterologist.

"Eggs are stalked, laid on wood surfaces near termite nests. Larvae live with and prey on termites, using an immobilizing gas (containing an allomone) discharged from their anus(3)(6)(Johnson & Hagen 1981). Adults come to lights."  Bugguide

That is right, a fatal fart!  The Rainforestsite has a more colorful description with details of what they refer to as "survival of the grossest."  Within three minutes the termite is stunned and it dies in 3 hours.  The lacewing larva can save it for a snack later in the day.

A single dose can kill up to six termites.  The termites are three times the size of the lacewing larva, a David and Goliath story in rotting wood.  Studies have shown no apparent harm to other species that live in the termite tunnels.  They aimed the larval gas at fruit flies, two kinds of small wasp, and book lice and it showed no effect.  How you aim a 7mm larva and convince it to let fly on command is what excites an entomologist.  Seeing that these weren't termites the larva may have withheld the dose.  I could say its fart wasn't in it, but I think I will let that pass.