This time of year when nature lacks color there is an evergreen that doesn't get much press.  It thrives permanently on several banks along Bull Creek but is easy to overlook.  It doesn't flower, has no seeds or leaves, and stands less than three feet tall.  It is an ancient species and definitely a "horse of a different color."

Equisetum (horsetail) is as primitive as it looks, a genus of living fossils, the only surviving members of its class named Equisetopsida, members of the fern family.  Their heyday was the Paleozoic Era (360-250 million years ago) when they were the dominant plants.  There were many diverse species filling the under story of the forests, some growing 90 feet tall. Their remains have accumulated in the earth for millions of years, producing our coal beds.

Our species is Equisetum hyemale, a.k.a. scouring rush, so named because of the silica concentrations in its stem.  Native Americans used it for polishing and settlers scoured pans with it.  Modern day craftsmen still use it for fine polishing and clarinetists use it to polish their reeds.  Like almost any living plant, some have touted Equisetum as a medicinal or a wild food although the descriptions of preparation could also probably be applied to serving sandpaper for supper.  ASPCA sources describe its toxicity in horses.  Fortunately, it is a survivor and is likely to outlast these few uses.  It grows aggressively along the water and is considered an invasive species in South Africa and Australia.

Equisetum reproduces primarily by rhizomes which are more numerous than their stems.  They can work their way down 6 feet into the soil and are therefore resistant to pulling.  They also reproduce sexually like ferns by producing spores from a cone at the tip or sometimes several lateral cones.  Once they release their spores in late spring or early summer the cones drop off, much like vascular plants shed their flowers.

It has another virtue appreciated by children.  You can pull them apart and slip them back together like joints on a fly rod.  Each stem is hollow for two-thirds of its diameter with joints every few inches.  The joints have fine longitudinal ridges and with magnification you can see 15 to 40 tiny black teeth on the upper rim that may break off with age.  These are actually leaves!  The stems contain the chlorophyll that produces it energy.

I find the best website for detailed information on Missouri plants is Illinoiswildflowers.  It also is rich in faunal associations and has great photographs, many of which are available to non-profit organizations like ours through their photo use policy.  A big thanks to webmaster John Hilty and his team.
Posted by Bob and Barb at 3:00 AM

Looking for color on a dreary January day?  I would suggest a digital stroll through the USGS Native Bee Inventory and Monitoring Lab.  There is no charge and you won't even have to leave your screen.  I was introduced to this by Dr. Chris Barnhart who sent me a poster with 25 facts about native bees.

The European honeybee, Apis mellifera, gets all the press with its role in pollinating agricultural crops and of course the commercial production of honey.  Say "bees" and we immediately think of colony collapse disorder.  Bee keeping is also a major hobby.  After spreading across Europe and Africa 2-3 million years ago with the Pleistocene warming, they arrived in North America with the European settlers in the early 1600's.

The spread of A. Mellifera has been wonderful but it has caused us to overlook and undervalue all the 4,000 native bee species!  How does that compare to other species in North America?
There are currently 634 species in the genus Perdita.  Some Perdita sp. found in the southwest measure 0.1 inch, smaller than Washington's nose on a quarter.   Many are brightly colored with yellow and white and iridescent metallic shades.  Most collect pollen from only a few specific plants.  All Perdita cannot sting.


At the other end of the spectrum there are giant carpenter bees, Xylocopa, which are over an inch long. The Eastern carpenter bee pictured here (X. micans) is a good neighbor, sticking mostly to the wood found in nature including hollow plant stems.  You can provide them shelter with a variety of native bee houses which will also attract potter bees that seal up the cracks and hollows of their individual nests with mud mortar.

The common Eastern carpenter bee, X. virginica is an exception in the carpenter and potter bee families.  It has developed too much familiarity with civilization and sometimes bores into wood of all kinds such as trees, porches, fences, decks, and (Boo!) cedar siding of our houses.  Painting or staining wood siding and repairing cracks discourages them.

Here are some of the facts that you can see in the 25 Slides in this USGA Presentation.
None of this is to demean the role of our beloved A. Mellifera, European honeybee.  We just need to recognize the role that all insects have in our world and the need to maintain native habitat to preserve these species.  All native lives matter.

To dive further into native bees I would suggest Bees in Your Backyard by Wilson and Carril.
Want to "grow" some native bees in your yard?  Try 100 Plants to Feed the Bees.

The Ant and the Lacewing 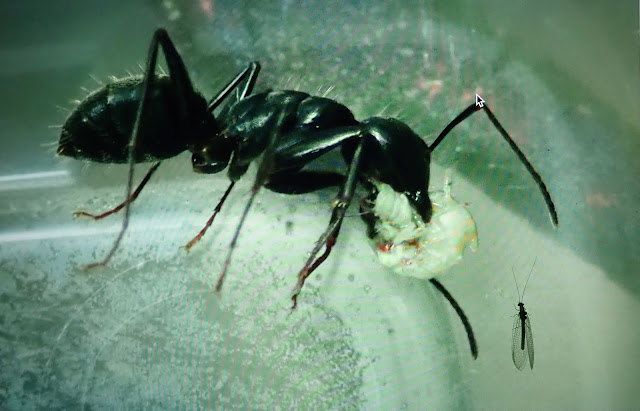 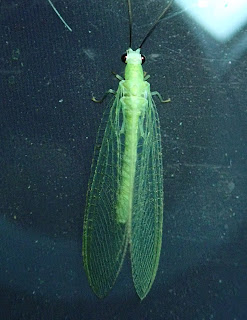 As I was editing a series of photographs of acrobat ants (Crematogaster sp.) patrolling a stem of Verbesina virginica covered with aphids, I saw a small insect land on my Macbook screen and stay there.  I took several photographs of the screen and to identify it as a green lacewing.

Then as I enlarged the photograph the irony struck!  The lacewing was watching me edit pictures of an ant carrying off a decorated lacewing larva!  I could only imagine its horror in seeing the onscreen carnage of its kin. 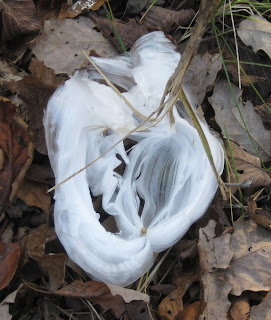 Verbesina virginica or white crownbeard is a plant that covers the edges of our fields, filling in the untended areas between the rows of riparian walnut plantings.  Its other common name is frostweed, named for the delicate ice ribbons or "frost flowers" split out from the base of the stem with first winter freezing weather.  This will recur with each freezing night unless a prolonged cold spell freezes the roots.  This topic has led to multiple blogs on the subject, and here comes another one! 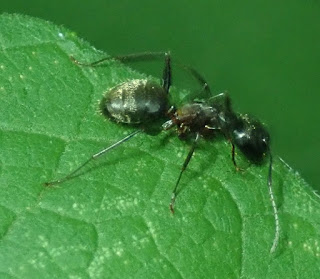 Back to the acrobat ants.  They patrol the 3-5 foot tall stems, protecting the aphids that cover the flower heads and upper stem of some of the plants.  Aphids suck out the plant sap and put out a sugary secretion called honeydew and many ant species will literally farm their ants like cattle, protecting them from harm by patrolling up and down the plant.  They get their sugar high from "milking" them in return for the protection.

Green lacewing larva also love aphids, but more for the "hamburger" than the milk.  Although they will also feed on caterpillars and some beetles, they are called "aphid lions" for good reason.   Grasping the tiny aphids in the tips of their large, curved, hollow mandibles, they suck out the body juices.  Once they become adults they will have chewing mouth parts.  The adults feed mostly on nectar, pollen, and honeydew but with some species the adults will feed on insects.

Aphids are not only juicy and soft bodied but they usually occur in large numbers.  A lucky lacewing larva who encounters them will start sucking their juices like scattered liquid M and Ms.  This is where the acrobat ants come in.  These are not your gentle vegan ants described above.  The Crematogaster sp.  are predominately arboreal, climbing all over plants and trees, earning the name acrobat.  They are also called cocktail ants for the way they raise their abdomens when alarmed. 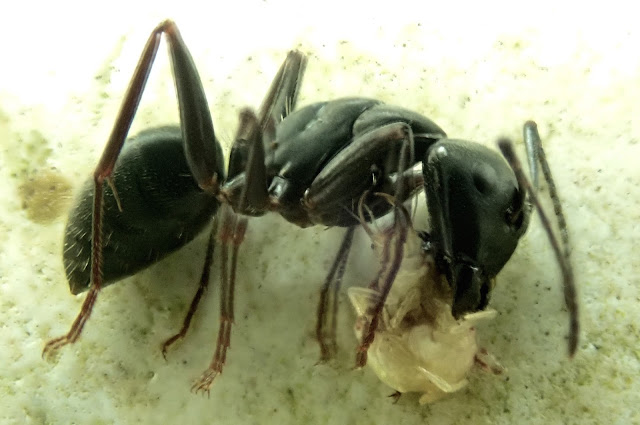 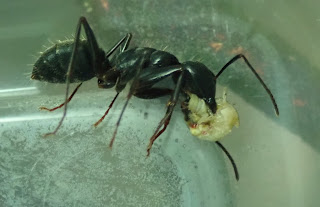 According to Wikipedia  "Acrobat ants acquire food largely through predation of other insects, like wasps.[5] They use venom to stun their prey and a complex trail-laying process to lead comrades to food sources. Like many social insects, they reproduce in nuptial flights and the queen stores sperm as she starts a new nest."  Our specimen above had a tight grip on a larva with helpless mandibles flailing against the ant's thorax.

As a reformed scientist I try to not anthropomorphize or put into human terms the feelings of insects that we think are living at a much less cognizant level.  I suspect the green lacewing up on top was just looking for a place to rest on my laptop screen, but I can't help thinking, "What would it think if it could see the screen?"
Posted by Bob and Barb at 3:00 AM