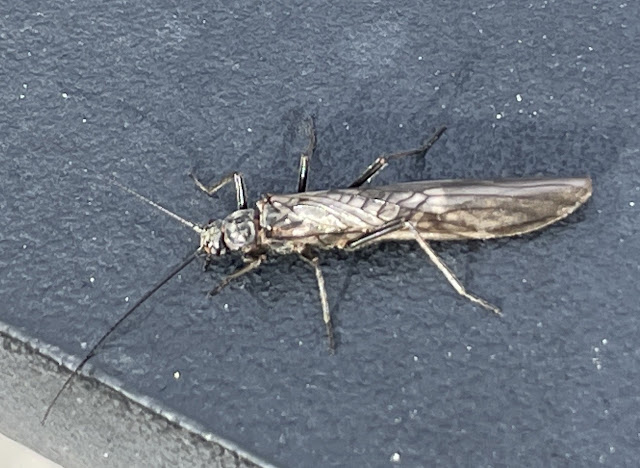 Tonya Smith sent this on winter stoneflies she filmed, seen racing over the ground in this video, during a hike at Shoal Creek.  I haven't come across these hearty insects that go out on a jog during freezing weather.  One reason for this, as the late naturalist H.B. Noel Hynes suggested, is that they are "most abundant early in the season before the average entomologist has emerged from hibernation."Stoneflies are in the order Plecoptera.  The winter stoneflies have their calendar completely reversed from other macroinvertebrates living in our streams.  The nymphs spend much of their life in the hyporrheic zone, the water flowing beneath the rocks and gravel bars on the bottom of streams with the adults emerging in late winter.

The critters Tonya found are out looking for love when they emerged from their final molt.  Although equipped with wings, many species prefer walking along the edge of the water.  In Tonya's video they are running.

The males tap their abdomen against the surface and if the female is in the mood she will tap back.  After that.....well this is a family blog but you know what happens. Then the female returns to the water to deposit her fertilized eggs.

Shortly after hatching, the nymphs essentially hibernate through the spring and summer.  In the fall they become active again, molting between 10-24 times before emerging as a winged adult.  The nymphs of most species are grazers, going through multiple molts while scraping aquatic vegetation or decaying organic matter from the stream bed.

Like some frogs and other winterized insect species, the secret to their success is antifreeze in the form of glycerol and a mix of proteins and sugars.  This prevents the water in their bodies from forming ice crystals.  I wonder if the reason Tonya's specimens below are running is to keep warm.