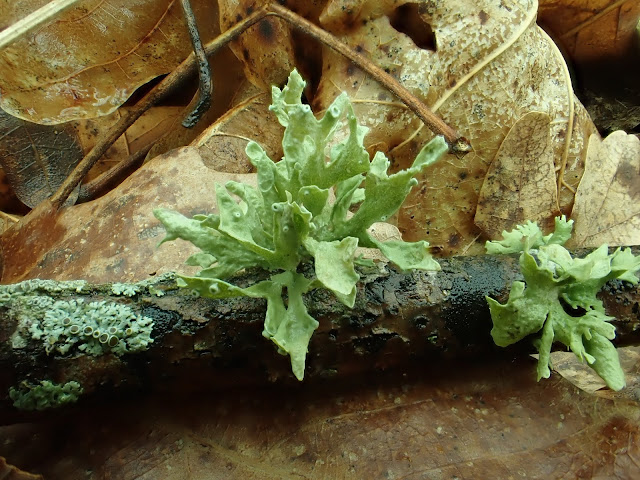 Hiking is a good way to treat the separation doldrums, even on a cold rainy day.  Between showers we were back on the Nature Center trail when I saw this weird lettuce clinging to a dead branch.  I sent the photographs off to Nancy Schanda, our chapter's lichenologist and she quickly responded, "Ramalinas are a Genus in the thallus growth form fruiticose. Lichens are really showing off with all this rain." 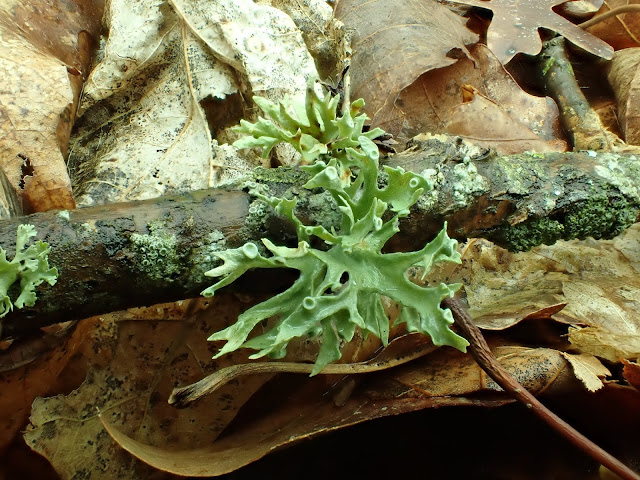 Next I tried a mycological viewpoint and Mark Bower responded, "I have found that lichen ID is a nightmare. They really are just fungi which have captured a photobiont. The algae or cyanobacteria don’t get much in return other than a place to stay - sort of like being in prison for a life sentence."

I thought this assessment was somewhat harsh until I read about Kerry Knudson, one of the foremost lichenologists in the Atlantic magazine.  To quote him, "“The algae is trapped.  It has a lot of tubes going into it. It’s controlled by chemical signals … The first time I saw it under the microscope, I wanted to join the Algae Liberation Front. I mean, it looked bad.”


"Alice Algae and Freddy Fungus took a Lichen to each other.  They got married and ever since then their relationship has been on the rocks - and other substances."  Ok, so it isn't Keats, but it does help the non-naturalist recall a basic fact.

To be fair, the fungus allows the algae to inhabit bark surfaces and rocks that otherwise would be bare.  The retention of moisture and chemicals from the fungus can slowly break down the rock, converting it to a component of soil in a matter of years.  This isn't a glamorous task but it occasionally lets the fungus and algae swell with pride after a rain.  Now back to Nancy for a more sympathetic description. 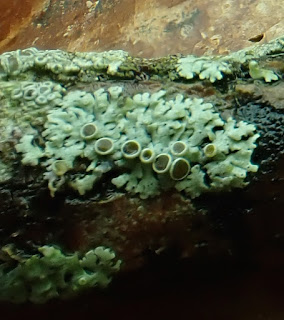 "Lichens are unique organisms. They are a composite formed by a fungus plus a unicellular green alga and/or a cynanobacterium. Lichens can be classified by growth form to help with identification. This lichen, Ramalina sp. is an example of a fruticose lichen that attaches to the substrate at the base. Ramalina found in Missouri share several characteristics. They have many flattened, forked branches that usually taper toward the end. The outer surface is usually wrinkled and pitted and vary from greenish-gray to a pale yellow-gray."

Fun facts:
So where do you start with learning about lichen?  Online resources are divided between a simple explanation and dense taxonomy.  Here are the best places I have found and I would be open to any other suggestions.
Addendum 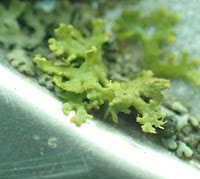 Lichen aren't limited to trees and rocks.  Here is a specimen that I am calling is Toyota truckii that I found on my 17 year old Tacoma.  It was always parked outside and I assume the moisture around the letters provided what the fungus needed to get established. 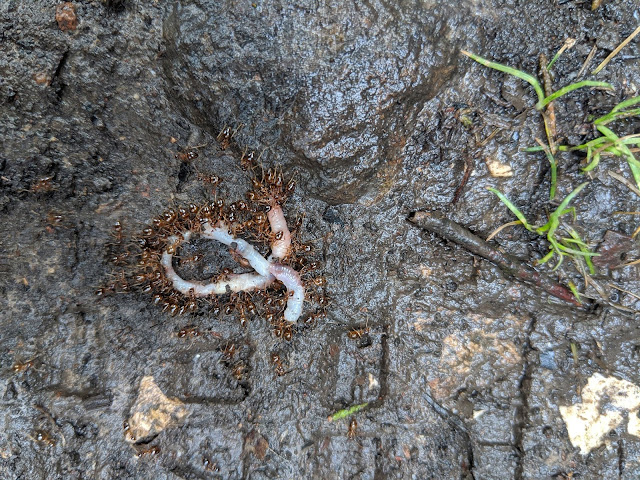 On a hike along the Little Sac River with the the WOLF School, the students photographed this finding on the rain dampened rocks.  On closer inspection it was a former earthworm being recycled by an army of ants. I couldn't tell much about them from this single photo but with a trained eye, myrmecologist (ant specialist) James Trager gave me the answer.


"This is a fairly common sight for those who go out with their eyes to the ground in these cooler months. The ant is the winter ant - Prenolepis imparis." 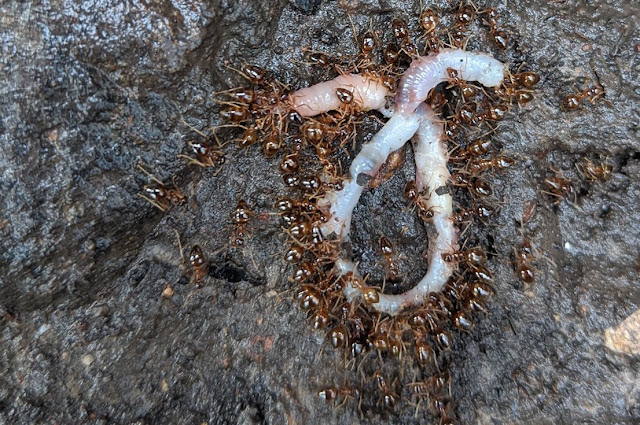 Looking closer, this turns out to be a very interesting ant species.  P. imparis (PI) is mainly active in cooler weather when it isn't in competition with other ants.  They are most active at temperatures between 45° and 60°F and can occasionally be found foraging at near freezing temperatures.

During warm weather they seal their nests entrances and stay deep underground.  Myrmecologist Walter Tschinkel used molten aluminum to create casts of their nests.  While this PI cast to the right is from Florida, nests in Missouri and Ohio are "only" one third that depth.*  This is attributed to the softer Florida sands and I can only imagine our PI using picks and dynamite to excavate the Ozark rocky clay.


Their colonies usually contain a few thousand workers and some of the colonies last 7-9 years.  Young adult workers eclose from their pupae and spend 10 months inside the colony.  Older adults forage outside the nest, returning to the nest to pass food to the younger workers by mouth-to-mouth regurgitation (word of the day - stomodeal trophallaxis).

"Young workers have softer, more flexible cuticles and their gasters can swell and distend to accommodate large amounts of liquid food. " This is stored as lipids in hypertrophied fat bodies. These 'corpulents' store more than twice their body weight in fats and nutrients. Once a corpulent worker has exhausted its food stores it becomes a forager during the next active season. This indicates that workers may live for up to two years, serving as a corpulent for the first and a forager during the second." **