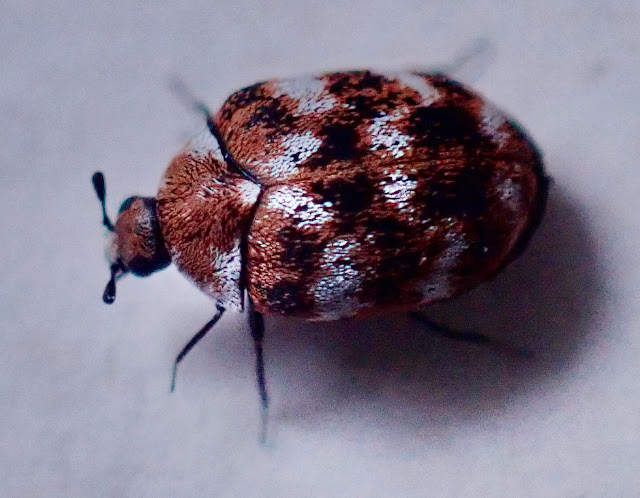 Barb found a tiny dark spot on her comb in our cabin.  It measured almost 1/10" (2.5mm) and under high magnification, to our surprise, it wasn't a tick.  INaturalist quickly identified it as a common carpet beetle, Anthraenus verbasci.  Their larvae feed on keratin and chitin in natural fibers like dead insects, animal hair and feathers so it must have been there for hair.

That would have been the end of the story except for some interesting details in its lifecycle.  For starters, it is the first insect proven to have its lifecycle adjusted by temperature.  Both its incubation and pupation is 5 times longer with lower temperatures.  The adults live for 2 weeks, feeding on nectar and pollen while mating and laying their eggs in human habitation and bird nests.  The larvae then feed on natural fibers in houses, bird nests, and in museums where they can be a serious pest.

The larvae are densely covered in large setae (hairs), and are commonly called "wooly bears" like our moth larvae.  These are defensive against its parasitoid predatory wasp, Laelius pedatus.  The female wasp will land on it and attempt to paralyze it with its stinger-like ovipositor.  The hairs will stick to the wasp, an annoying deterrence which rarely prevents the wasp from winning.

It will then observe the larva for up to 24 hours, repeatedly biting it to assure paralysis while removing the irritating hairs from its body before inserting its egg into the helpless victim.  The egg hatches and a week later the wasp larva will have consumed the woolly bear and formed a pupa.

Carpet beetles are considered a major pest in English museums, often destroying insect collections.  Their most likely entrance is from nearby nests of the same English Sparrows which have achieved a pest status here in the US.  Poetic justice, anyone? 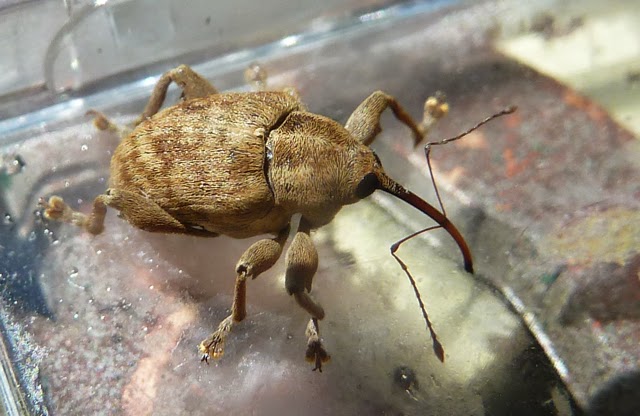 Last fall I found this long-nosed beetle in a patch of oak trees.  Although it looks dangerous with a long curved snout, you should "fear no weevil," for it attacks only plants.  With its long slender beak and its sharply elbowed antennae, it is identified as a nut and acorn weevil, a member of the genus Curculio with over 30 species on our continent.  Many of these make their living only on oaks. 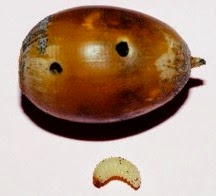 I collected some acorns and sealed them in a ziplock bag and 24 hours later I found a Curculio larva in the bottom of the bag adjacent to a newly drilled acorn.  Once out of the bag, it laid still for a minute and then started to make its getaway, looking for some nice soil to pupate for a couple of years.  It was slow moving so I had lots of time to set up for this macro movie to document its progress. 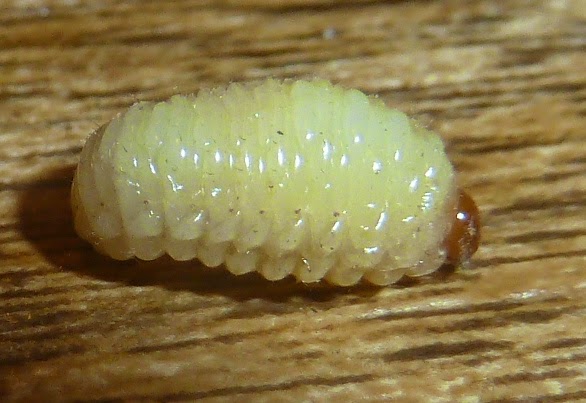 Life begins for a weevil when a female bores into a green developing acorn and deposits a single egg.  She seals up the tiny hole with her fecal material and the larva will emerge from the egg to find shelter and sustenance.  After consuming most of the nut's contents, it carves out a round hole and struggles out of the acorn.  The larva will then crawl off into the soil to pupate.  The whole process is shown in this short National Geographic video.

The pupa may not emerge for over a year, coming out as an adult in the summer, hopefully at the time the acorns are greening up.  After mating, the female begins a long journey up a mature oak to start the cycle again.  She flies, although you would never guess it from this photograph.  Watch the sequence in the first 90 seconds of slow motion here, but watch the rest for other cool insect flights.

As if life wasn't hard enough, here come the weevil wasps, Cerceris sp. that specialize on acorn weevils.  Cerceris halone attacks only oak acorn weevils.  The female wasp stings the weevil and paralyzes it.  The immobile weevil is then brought back to the previously prepared underground nest and stuffed inside a cell where it remains alive, but paralyzed. A hatching wasp larva immediately begins feeding on the living, paralyzed weevil. Once the wasp larva has grown, it will pupate into its adult form and leave the nest and the now dead weevil larva.


A fun fall activity is to collect acorns and crack them open to find weevil larva.  Put them in a pan of water and save the ones that float to crack open for the larva.  The space that the larva has chewed out makes them buoyant.  On the other hand, if the acorns sink "you will see no weevil."  Sorry......no, not really.

Whoops, It's a Plasterer Bee

Last week I posted a blog on this bee that we tentatively identified on INaturalist as a Orange-legged Furrow Bee.  The fuzzy photograph is a frame grab from a 7 second video sent by Patty Hatcher.  I sent it in to Bugguide and just got back this expert identification of an Unequal Cellophane Bee (UCB), a name that even I couldn't make up.  UCB has an official name of Colletes inaequalis. 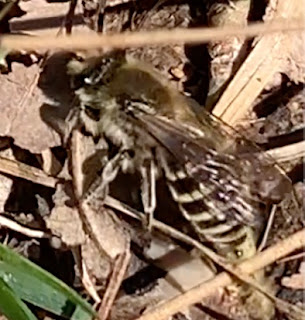 I sent this different view of the same bee back to INaturalist and it's first choice was also a UCB.  There are several lessons here. The first photo above is fuzzy beyond the normal of the bee's body. The view to the right shows more details including the legs which were important in the identification.  Finally, when in doubt, submit to Bugguide.

I edited Patty's original 7 second video of the scuffle in a quarter speed replay at the end in this video version and asked her to describe her experience.

"I saw a bunch of these little bees poking their heads out of the ground at Busiek. While watching them one was all the way up when a second bee walked up to it and they started fighting. The tussle only lasted a few seconds and they went off in opposite directions, nobody hurt. I didn’t see them nectaring on anything specific. It was early, the 20th of March so maybe they were just venturing out of the ground into the sun."

Ground nesting bees make up 70% of all bee species world wide.  They make solitary nests although they may be gregarious, having many neighbor nests of the same species in a small area.  Building a nest with a open tunnel and no roof means their offspring are in danger of flooding and wet soil.  Most species overcome this by creating a glandular secretions that they brush on the cell walls.  This lining is a secretion product of the Dufour's gland, located at the base of the sting in female bees.  They then spread this transparent, waxy coating around the brood cell, with their mouth, protecting the larva from flooding and spoiling of their nectar and pollen provisions.

UCB is a common species of plasterer bee (family Colletidae), native to North America.  Like other species in the genus, it lines the cells of the underground nests Dufour's gland secretion but they mix it with their saliva.  This dries to a smooth  cellophane-like lining, giving them an alternate names of Polyester or Cellophane Bees.  Cornell.edu has a lot more information including an explanation of what Patty was observing during the little clash of neighbors.

"One of the most abundant ground nesting bees in northeastern and midwestern region of North America is Colletes inaequalis. Even though this bee is solitary, meaning that every individual female builds her own nest, it is also a gregarious nester. Many females (hundreds and sometime thousands) build their nests next to each other. The nests are obvious above ground because of the conical piles of dirt with a hole in the middle."

Unlike social bees and wasps, solitary species are not aggressive insects.  Females do have a stinger but will not attempt to sting humans unless handled. Most activity at nest sites in early spring is of males looking for females to mate with.  So Patsy's observation was probably just boys being boys.

Discover Life has a lot of high quality photographs of the UCB nectaring.