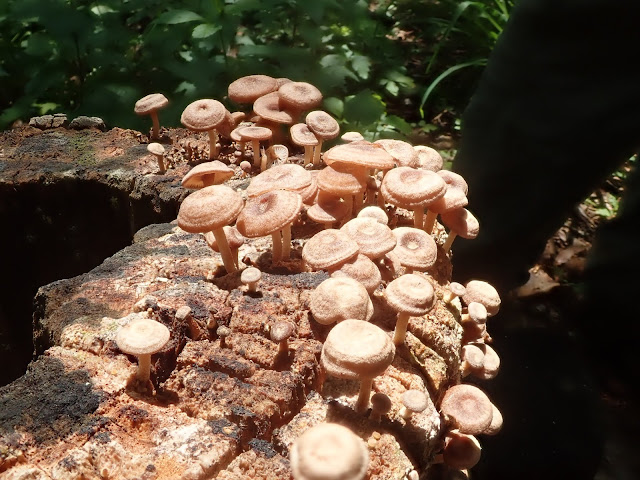 Mark Bower dropped by at Bull Mills to visit and spotted these little mushrooms on a dead hollow log by the front door.  We had an unexpected shower earlier that caught me outside and unprepared and the mushrooms hadn't been there when checked the rain gauge by the log 2 hours earlier.  How did they shoot up that fast?  Read on. 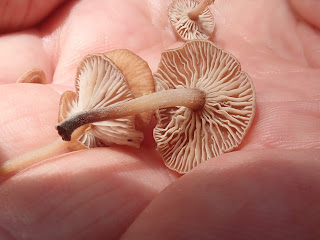 Mark identified them as the fetid parachute, Gymnopus foetidus. Now I am not a mycologist but even I know that calling something fetid is not a good start for a relationship.  They fit the description with caps that were 1-2 cm wide, reddish-brown in color with a sunken navel-like center and reddish-brown striations extending to the pleated margin.

Mark insisted that I sniff one up close.  I recalled a hike in the past when he wanted me to try tasting a mushroom that was "very bitter." After I declined repeatedly, he tasted it and spend the next few minutes spitting, wiping his tongue and saying "That was awful!"  This time I did give it a little sniff and fetid pretty well sums it up.

To me the amazing story was how fast they had appeared!  He had told me about the overnight appearance of morels that most of us have experienced.  I asked him to write out the explanation below.  This is a bit of fascinating science so stick with us for a few minutes.

Mushrooming up over night? If the body is spread out and microscopic, how do mushrooms grow so quickly? There are two basic reasons: 1) Since they store up compounds between fruiting and most fruit once a year, they have a lot of reserve available to support the mushroom. 2) Mushrooms develop differently than plants or animals do. Plants and animals grow through cell division - to get bigger they have to produce more cells. Cell division is relatively slow and requires a lot of energy. The mushroom body also grows by cell division. However, the mushroom fruit does not grow by cell division. Just about as soon as it starts to develop, a mushroom has almost the same number of cells that the mature mushroom will have. The mushroom increases in size through cell ENLARGEMENT! This means that the cells can balloon up very rapidly. Very little energy is required, basically the cells just enlarge with water. So a mushroom can increase in size as fast as water can be pumped into its cells. Almost overnight a mushroom can go from a pin head to a large mushroom.,

The Fruiting Bodies
Some mycorrhizal fungi types (specifically, ectomycorrhizal fungi) form mushrooms, the specialized fruiting bodies that play a role similar to that of flowers in plants. Mushrooms can grow below the soil, as do truffles, or above, as do morels. Their caps can be gilled or nongilled. Some have economic and gastronomic value, such as porcinis and chanterelles. Not all mycorrhizal fungi produce mushrooms, although all mushrooms are fungi.

Mushrooms are typically the part of the fungus that carries and disperses fungal spores, usually through sporangia (sporangium, singular), the enclosures in which the spores are formed. Each tiny spore released from a sporangium gives rise to a hypha, which branches and grows into hyphae, which then continue to grow and interweave to form a mycelial web.

Sometimes the hyphae form rhizomorphs, structures that transport water and nutrients throughout the network. This occurs when parallel hyphae merge. The inner hyphae lose their nuclei and cytoplasm, becoming hollow.

At the appropriate time, given some cue from nature, some environmental condition stimulates the fungus, and signals are created in the circulating cytoplasm, which cause the hyphae to merge and form a primordium, a tiny knot in the mycelia. This primordium includes all the cells the mushroom will ever have. It enlarges into a tiny budlike structure, or button, which will grow into a full-size mushroom.

All a mushroom requires is water to fill the cells. The mushroom can rapidly pull in water from its mycelium and expand the primordium. It can take less than 24 hours for a primordium to fill and grow; this is why mushrooms can pop up so quickly. Mushrooms have outer membranes, or veils, that dehydrate rapidly, so they usually appear only when temperature and moisture conditions are right. Those hydrophobins are working full time.