I just spent 20 minutes sitting on a parking lot studying about ants.  Fortunately my truck is air conditioned although I didn't do much to help global warming.  Don't blame me, blame NPR. 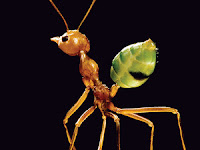 Fresh Air had a fascinating interview with Mark Moffett who has just released his new book Adventures Among Ants: A Global Safari with a Cast of Trillions, that describes his research of various ant species around the world.  He has been called "the Indiana Jones of entomology" by the National Geographic Society.  If ant studies aren't usually your thing, just take a listen to his entertaining descriptions of ant life, sex, and warfare.
I found the descriptions of ant warfare to be particularly fascinating.  He contends that the only species which conduct large scale and prolonged wars are ants and humans.  Ant species do this as a biological imperative while human motivation is more complex.
He describes the warfare between massive ant colonies when they border on the territory of another combative species.  There is an invasive species of Argentine ant that lives in enormous "supercolonies" including one that extends from San Francisco to the Mexican border.  If you move them into another ant's territory they will fight to the death, while they blend in peacefully when transplanted into an another area of their supercolony.
There are similar colonies in Spain and Japan, leading researchers to conclude that the three colonies studied actually represented a single global super-colony.  The researchers stated that "enormous extent of this population is paralleled only by human society".   Of particular interest, when members of small colonies are exposed to small colonies of ants from another continent they will fight.  However when the experiment is done with ants from the supercolonies, they rub antennae and behave as life long friends.  All of this is much better described by the BBC.

The invasive fire ants that have invaded the Southern United States are described in Wikipedia.(Picture on left)  While many ants bite and then spray acid in the wound, fire ants bite only to hang on while they inject an alkaloid toxin.  The toxin causes a burning pain and can occasionally be fatal to sensitive individuals
"Although most fire ant species do not bother people and are not invasive due to biological factors, Solenopsis invicta, commonly known as the red imported fire ant (or RIFA) is an invasive pest in many areas of the world."  It was introduced by a South American ship in Alabama in the 1930's and spread across the Southern US and now have reached California.
If you are interested in borrowing Moffett's book, let me know, but be prepared for a long wait.  Meanwhile, some of Moffett's amazing photographs are available  at this NPR site.  They are not for the faint of heart and the captions are hard to read but the effort is worth it.  Warning: You may never walk barefoot again.
Posted by Bob and Barb at 3:04 PM