This is the time of year when we see white snakeroot  all along the trails and roads on Bull Creek.  The plants stand 3 to 5 feet tall with elliptic-oblong leaves which are lance shaped with sharp teeth.  The tiny white flowers have no rays.  The great spangled fritillaries are nectaring on them in desperation as few other flowers remain.

White snakeroot (Ageratina altissima)* has an interesting toxicology.  Animals that eat a large amount of snakeroot or small amounts over a long time will develop a disease called the trembles.  An Illinois veterinarian website describes the tremetol toxin which produces a progression of symptoms from tremors, loss of appetite and progressive weakness to death. 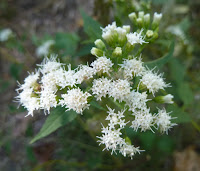 It was a public health threat in the early nineteenth century as Europeans move to the midwest and encountered this new plant.  Cattle can transfer the toxin to humans who drink the tremetol-laced milk, producing milk sickness.  Many thousand of these early settlers died from milk sickness, most notably Abraham Lincoln's mother, Nancy Hanks Lincoln.  Abraham was 9 years old at the time and carved the wooden pegs for his mother's casket.  Several others died at the time including her aunt and uncle.

USDA studies have shown that deer don't browse white snakeroot.  Much like their exotic European human counterparts, cattle and horses lacked the knowledge of their new surroundings and will eat it freely.  How many thousand years might it take for cows to "learn" to avoid snake root?

It is interesting to speculate on how deer "learned" about snake root and transmitted this avoidance behavior to their offspring.  Is it by sight or by smell or by the mother deer nagging, "Now eat your sapplings but not those tall flowers"  Maybe they just think it tastes like brocolli.

*Hot News Flash-  A group of botanists comes up with the names of plants.  I suspect their name is the Botanist for Steady Work Commission.  What ever it is, they came up with a the new name for Eupatorium rugosum (reproted in the original blog) which is  Ageratina altissima.  Thanks to Linda Ellis for bringing you up to date.  I am sure you have all memorized Eupatorium rugosum so please accept my apologizes.
Posted by Bob and Barb at 2:00 PM