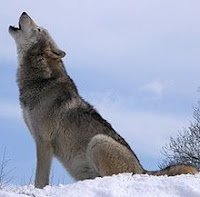 Matt Ridley recently wrote Welcome Back, Wolves.  Staying for Dinner? in the Wall Street Journal.  He discussed the relationship between top predators, called apex predators, with other predatory species.  Wolves and mountain lions filled this role until the last century and they are making a comeback in Yellowstone, Montana and Europe.

The results of their expanding numbers are particularly interesting.  When they arrive back in the neighborhood, there is a decline in mesopredators, the lower level carnivores such as coyotes, raccoons, skunks, foxes and in some cases domestic cats gone feral.  Cats, whether feral or your family pet are a major cause of songbird mortality, with an estimated 500 million deaths a year.

Apex predators such as wolves will devour the mesopredators as well as out compete them for resources.  While mountain lions are solitary and cover wide ranges, wolf packs are more effective because of their pack strategies.

This led me to ask the question, "What is the apex predator in the Ozarks?"  An obvious answer would be humans equipped with guns, fishing rods and motor vehicles.  I am arbitrarily limiting my apex predator candidates to non-bipeds, so I will nominate the coyote.

Coyotes are expanding nationwide and are increasingly urban.  There are reports of their presence in New York, Chicago, Los Angeles and other cities as they have expanded their range across the nation.  They are extremely adaptable and are learning to live in civilization.  They have us to thank for their newfound prosperity in our neighborhoods.

People unwittingly helped coyotes flourish when they exterminated most of the wolves in the United States.  Coyotes became top dog, filling the wolf's ecological niche.  Deforestation and agriculture opened up previously dense tracts of forest, and human settlements, with their garbage, vegetable gardens, compost piles and domestic pets, provided food."     See City Slinkers in Smithsonian.
In the last ten years they have come in from the suburbs and now can be found trotting down sidewalks and raising their young adjacent to day care centers.  Being intelligent, they appear to be passing their new found skills along to their younger generations.

"And the researchers have reason to believe this change is in the works: The foxes have been outcompeted by growing populations of coyotes in the regions, which are becoming the top predators in areas where mountain lions and wolves have gone extinct. The coyotes are more dangerous to the foxes, lowering their numbers," the researchers said.
"A new top predator has entered the Northeast and has strong impact on the ecosystem," Levi said in a statement. "Coyotes can and will kill foxes and more significantly," he said, "foxes often don't build dens when coyotes are around."  livescience.com

This is not all bad.  They tend to suppress excess populations of house-eating squirrels and urban rats.  On the other hand, where coyotes are prevalent, fox, numbers dramatically decrease.  Studies have even shown an increase in Lyme disease where fox populations are down, due to the increase in small rodents such as mice that carry the disease.  It turns out that rodents are a major factor in Lyme disease prevalence.

And how did the coyote become the Ozark top predator?  Likely the disappearance of competition from panthers and wolves.  Wolves in the Ozarks?  Coming soon in Top Predator- Part II.
Posted by Bob and Barb at 8:13 AM