Beetles in an Oyster 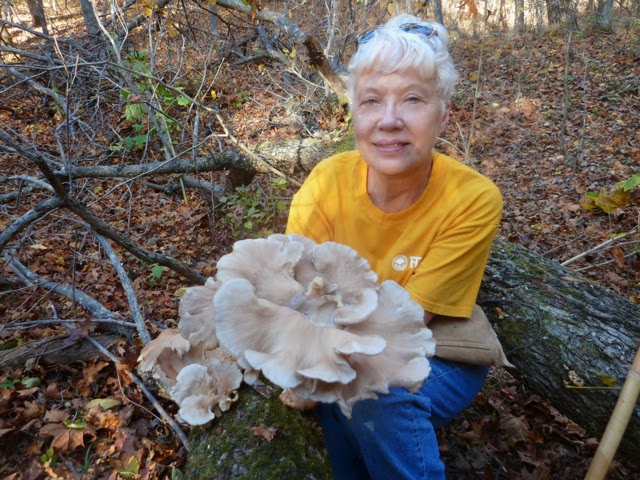 It has been a good year for oyster mushrooms, Pleurotus ostreatus, a common and much loved edible species.  Through the generosity of Mark Bower sharing his finds, we had so many that Barb groaned when I brought home another batch.  It turns out that we aren't the only ones that eat them.
Oysters do not live just to please our palates.  They are important saprophytes like many other mushrooms, their fungal rhizomes digesting dying or dead wood.  When a big log breaks apart as you lift it up or step on it, you can thank a fungus.  Imagine how deep the logs would be in our forests without fungi.

Deer, chipmunks, squirrels, box turtles and banana slugs and snails are said to eat oysters but fortunately none of our finds have been chewed up.  What we have seen frequently are tiny 2-3 mm black dots in the gills which on close inspection turn out to be beetles.  This is especially true in older specimens where we will find them in cavities in the stalks as well. 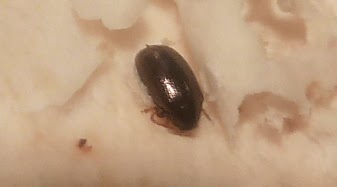 I was curious about the identity of this beetle and tried to find "it."  It turns out there are a lot of beetles that find a home in oysters.  The Peterson Field Guide to Mushrooms description of oyster mushrooms states "specimens collected for the table should be inspected carefully for shiny black beetles which lay their eggs on the gills and beetle larvae, which tunnel into the mushroom flesh."  This isn't to say that the larvae are from the beetles as lots of insects are found in mushrooms, either to eat, eat the eaters, raise babies or because it is just a good place to hang out.

A detailed study of beetles associated with Pleurotus ostreatus described 30 beetle families with 136 species.  Of these, 60% were obligatory mycetobionts, i.e. they require the fungi for food, although not all are limited to P. ostreatus, Some may live and breed entirely within the fungi to complete their life cycle.  Other species are predatory on mycetobionts, some even feeding only on them so that they too are dependent on the mushroom.

P. ostreatus occurs throughout the year in the midwestern United States, allowing the mycetobionts to complete their lifecycle on a sporocarp (fruiting body=mushroom).  Some species seem to specialize in spring or fall oysters.

Several families of Diptera (flies) raise their larvae (maggots) on sporocarp flesh.  Some species are even obligatory, requiring the fungus to complete their life cycle.  Again, where there are larvae, there are likely predaceous beetles, eating the larvae while a living in the folds of the sporocarp.

One of the most commonly found beetles are the Erotylidae family, called the  pleasing fungus beetles.  They lay their eggs on the mushroom and their larvae feed on the fruiting bodies of fungus and thus don't cause visible damage to the oysters we picked.  A simple washing will displace them in fresh oysters - sort of.
Although most pleasing fungus beetles are black with a reddish-orange color pattern, some are totally brown or black.  Unfortunately, our specimens are black and their antennae and legs are tightly tucked in so consulting Bugguide couldn't identify it.  Ours may be in the  Tritomini family, possibly Triplax sp which specialize in Pleurotus fungi species. Until I get a more cooperative subject and a better camera, this will remain unknown.
Oyster mushrooms can be readily identified by the gills which extend down the short stalk.  There are no lookalikes in Missouri that are poisonous, but as always, you should never eat a mushroom unless you are absolutely certain of the identification.  Even then, occasionally individuals will have an allergic reaction, so it is best to eat only a little bit the first time. 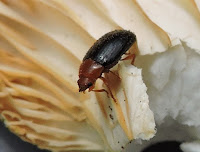 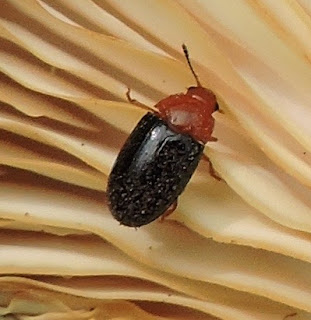 Pleasing Fungus Beetles, Triplax thoracica, is one of four Triplax spp. with the orange-red pronotum.  Eorytlidae of Nebraska, p.59 reports that of the over 1000 specimens reported nation wide, 98% were on Oyster mushrooms, the only fungus that the beetles have been reported to have been raised on.
P.S. 9-10-2017

* Detailed research on the beetles found in oyster mushrooms is found in this JSTOR.org paper.
Posted by Bob and Barb at 8:20 AM