I found a smooth sumac (Rhus glabra) at the Watershed Center that had a number of yellow galls on the underside of its leaves.  These galls are produced by aphids but that is only the beginning of a fascinating story.  I cut into a number of galls to see the early stages of development, a view better seen in James Trager's photograph.

The process begins in the summer when a winged parasitic sumac leaf gall aphid, Melaphis rhois lays a single egg on the underside of a sumac leaf.  The egg induces the leaf to produce a protective covering where the offspring can live fed by the plant and protected from predators.  The single egg reproduces a series of generations by parthenogenesis (reproduction from an ovum without fertilization) so that an individual gall may eventually hold 3-4 generations of larvae.  I opened 6 galls and estimated that there were between 200-300 aphids per gall.  You can see the different instars in the photograph as well as in this video.

In late summer winged females will emerge from the gall and fly off to moss to establish asexually reproducing colonies.  These offspring are male and female and their mating will produce the eggs that will be back on sumac next spring.  This life cycle requiring two plant species is unusual but not unique.  In 1989, it was reported that the use of alternate plant hosts by the aphids dates from 48 million years before present.  This Melaphidine aphid life cycle can be dated back 48 million years when the Bering land bridge supported both the aphids and their two plant lifestyle on what was soon to be two separate continents.  See ncbi.nlm.nih.gov.  When identified, this was the oldest known documented insect-plant relationship."  Wikipedia 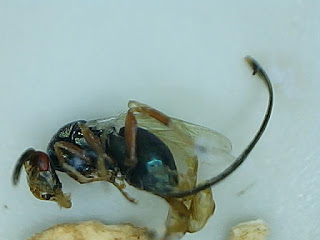 Complicated?  Just wait for the next blog when we will discuss this insect that I found in the first sumac gall I cut into.

An overview of gall-making insects is at this link.