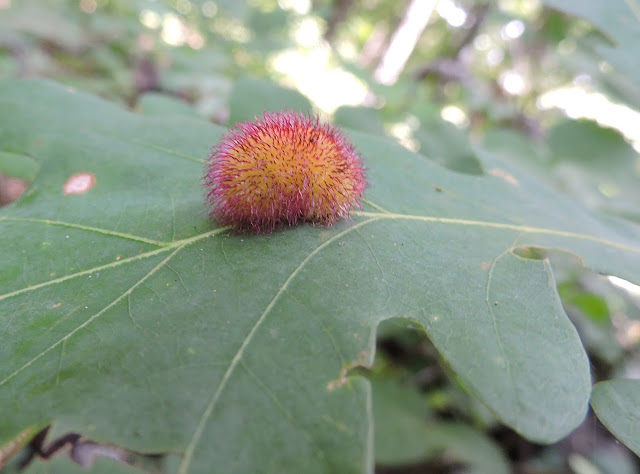 I found a few of these galls on a bur oak leaf.  A photograph online identified them as Spiny Oak galls and said they were caused by a Cynipid wasp, Acraspis prinoides,but nothing else was available on it.  Another white oak leaf gall that might be confused with it is produced by Callirhytis furva, but this one is more hairy than spiky.

I would have described them as hedgehog galls so on a whim I searched that name and hit the jackpot.  Charley Eiseman, who has literally written the book on galls and other signs* as usual had  described my gall on Bugguide.   He identified the Hedgehog Gall Wasp as Acraspis erinacei and even had a photograph of the wasp.


The life cycle is a bit complicated.  The process begins when a fertilized female lays eggs on an oak leaf.  The hatchlings cause some damage and the leaf responds by creating the gall around them. The gall contains three to five larval cells, each holding a female that will emerge in the fall and lay eggs on leaf buds without mating.  After being exposed all winter, the larvae stimulate other galls, and adult males and females will emerge to mate and start the cycle over again.

The gall looks delicate but don't let that fool you.  Cutting through one with a razor blade requires a lot of pressure.  What you see is below.


*  Tracks and Signs of Insects and Other Invertebrates: A Guide to North American Species
Posted by Bob and Barb at 3:00 AM