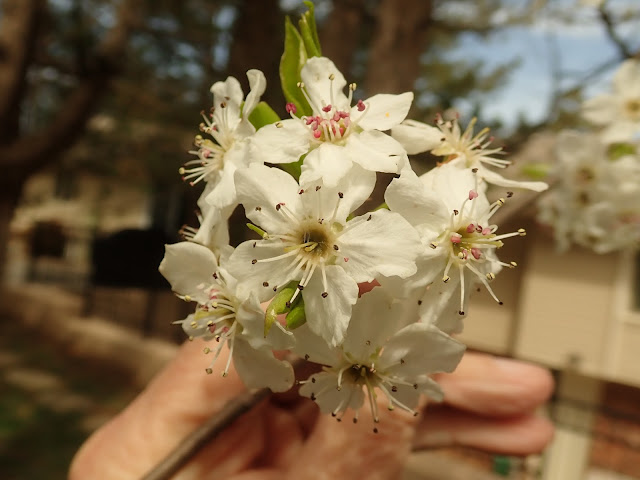 "...and a partridge pear in a pear cedar tree"

Barb called me a few weeks ago to tell me that she had found a Callery pear tree (think Bradford) next door that was growing out of the trunk of an eastern red cedar.  I won't go on to say what I thought at the time as she edits this blog.  As I trust her fully I only said, "Oh?"
When I got home I went out to see it for myself.  Indeed, there is a Callery pear tree, Pyrus calleryana, 2.5" in diameter emerging from the cedar's trunk three feet above the ground!  It is healthy and happy, approximately 12' tall and in full bloom.  The cedar appears healthy and is the same height as its mates along the line.

Close up you can see that a branch was sawed off years ago.  The Callery emerges from the top edge of the scar, which is 3" in diameter, on a 9" DBH (diameter at breast height) cedar.  There is no visible opening to suggest a cavity where a seed might have fallen in the past.

The first thought might be that it was grafted.  Bradford pears like all other flowering broad-leaf trees are angiosperms and can't be grafted onto gymnosperms such as junipers and pines.  (Technically, our "eastern red cedars" are not cedars, they are junipers, Juniperus virginica.)

The current consensus** of several forestry people is that some time in the past fifteen or so years a bird passed a seed onto the branch and it landed in a crack in it.  Perhaps the bird's feces provided it a little nutrition and a break in the cedar bark allowed some water to collect.  A big question remains - does its roots extend to the ground or is it getting its nutrition from the cedar itself?  I hope to protect it until someone can study its vascular connection to either the cedar or roots extending into the ground.  Regardless of the details it certainly was a one in a million occurrence.

Callery pear trees were brought to the US in 1916 from China to combat fire blight in the common fruit pear (Pyrus communis).  Once they were found to be relatively resistant, 100 pounds of seeds were imported to develop a resistant genotype.  Over the years more seeds from across China, Japan and Korea were collected and made available to nurseries.

In 1952, the ornamental possibilities of one particular vigorous, thornless tree were recognized, and cuttings of it were grafted onto P. calleryana seedlings.  After 8 years of successful testing in nearby neighborhoods they were named "Bradford."  They are unable to self-pollinate, therefore the trees, by themselves, couldn't set fruit. Their vigor was described by USDA plant explorer Frank Meyer in 1918 who had first collected the seeds.


"Pyrus calleryana is simply a marvel. One finds it growing under all sorts of conditions; one time on dry, sterile mountain slopes; then again with its roots in standing water at the edge of a pond; sometimes in open pine forest, then again among scrub on blue-stone ledges in the burning sun; sometimes in low bamboo-jungle...and then again along the course of a fast flowing mountain stream or on the occasionally burned-over slope of a pebbly hill."

When a species is described as thriving in any condition, tolerating all enemies, and like Superman "able to leap over tall buildings in a single bound" you are describing an invasive species.  Soon there were several cultivars produced across the country and when they were planted together as my dad would have said, "up jumped the devil."

A cultivar with striking leaf color in Oregon became Autumn Blaze. Aristocrat, from seedlings growing at a nursery near Independence, Kentucky, had a strong central leader with horizontal branches and an early pyramidal form, more sturdy that the somewhat fragile Bradford.  Chanticleer, cloned from a street tree in Cleveland, Ohio, was named the 2005 Urban Tree of the Year by the Society of Municipal Arborists.

Callery pears and their 'Bradford' kin are now spreading wild and are considered possibly the greatest invasive plant species threat in Missouri.  In the words of Nathan Muenks* of MDC:


"It’s difficult to truly determine which invasive species is most impactful, but Callery pear sure ranks up there with bush honeysuckle, sericea lespedeza, spotted knapweed, feral hogs and a few others. The reason being that it I would consider it an “ecosystem changer.” Given its ability to invade many of Missouri’s habitat types (whether open or wooded) and the fact that it forms such dense thickets, it has the ability to drastically out-compete native flora and drive away native fauna by creating unusable space for them. It not only grows dense, it also grows quickly. In addition, it’s a tree, vs. bush honeysuckle and others, so it can tower into the upper mid-story – what hope do our native, slower growing trees have in competing for resources and regenerating our native forests and woodlands?

There is no doubt bush honeysuckle and other invasives are much more widely distributed and affecting more natural communities at this time, but there is a strong fear that Callery pear is on a very similar trajectory. While in St. Louis yesterday, I noticed that bush honeysuckle and Callery pear tended to do just fine growing together, with honeysuckle dominating the low under-story and the Callery pear towering above it – SCARY! Is this the future of Missouri’s landscape? It could very well be if we don’t halt the invasion and join in this fight together!"

I would nominate Callery pears as our most invasive plant species, pending the discovery of garlic mustard growing on the back of a zebra mussel.  I am proposing naming this Callery/cedar tree shown above, Juniperus calleryana var. Barbarae, in honor of the discoverer.
==========
Update 2020

Now two years later there are three branches growing out the other side of the trunk as well.  The cedar is otherwise healthy looking.

Continued growth of all the original branches (red arrow) with two new small branches growing out  of the bottom two feet of trunk on the other side.  Also, a new growth with leaves coming out of the soil one foot from the base of the tree (lower right arrow).  While that could be a separate seedling there aren't any others in the surrounding area.  This would seem to settle the question of nutrition as the Callery now has roots in the ground through the cedar trunk!

** If any other readers have a better idea about how the pear grew on the cedar, we would be glad to hear it.
=====
Post-publication Ideas
James Trager- Need a CT Scan of the tree.  Yes, they have been done, see this Youtube.