The "worms" on this tomato won't crawl off onto the kitchen cabinet and are not aliens come to earth.   Kelly McGowan explains that these are an example of vivipary.  This is an example of what happens when seeds germinate prematurely while attached to the parent plant or fruit.  She explains this phenomenon:

"Seeds contain a hormone that suppress the germination process.  This is a necessity, as it keeps the seeds from germinating when conditions aren’t favorable and missing their shot to become plants.  Sometimes that hormone runs out, like when a tomato sits around on the counter in a warm kitchen for too long.  This doesn’t effect the edibility of the fruit or vegetable." 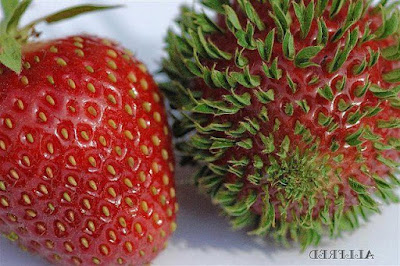 Given time and the right temperature a new plant sprout would eventually poke through skin as the tomato decomposed.  According to the University of Connecticut Extension.  Although sprouts can be potted up, offspring won’t be a clone of the parent plant.  The seeds are the result of pollination of the flower with another plant's pollen.  The strawberry can also sprout seeds.

In corn, vivipary is most likely to occur when upright dry corn on the stalk is re-wetted by rain that is trapped by the leaf husks at the base of the ear where the germination then occurs.  This can degrade the economic value of a corn crop but fortunately can usually be avoided by timing the harvest.

Without getting lost in a biological word salad, vivipary is the normal method of reproduction in some plant families such as mangroves.  It is different from viviparity which occurs a variety of animal species, ranging from aphids and cockroaches and snakes to us mammals.

Placental viviparity occurs in mammals where the embryo develops inside the body of the parent. Ovaviviparity is an outdated term which used to encompass a variety of processes including snakes that give live birth.  The current developing terminology listed here is even more complicated.  Trust me, you don't want to go there.