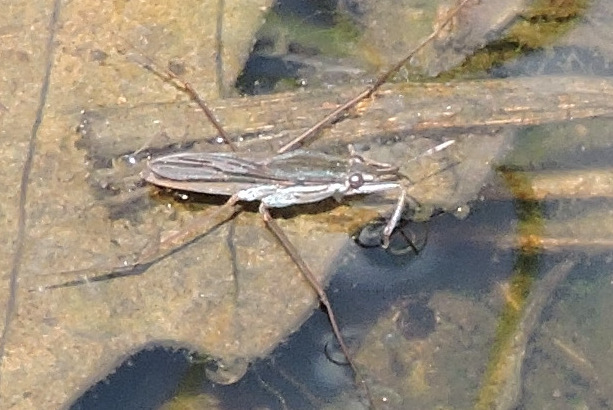 A pleasant way to spend a summer afternoon is sitting in the swimming hole watching water striders skim across the surface.  Gerridae are a family of insects in the order of "true bugs," Hemiptera.  They use their front and back legs to stay on the surface, rowing with the middle pair.  The short front legs have claws to grasp prey from above and below the surface while the hind legs can serve as rudders. 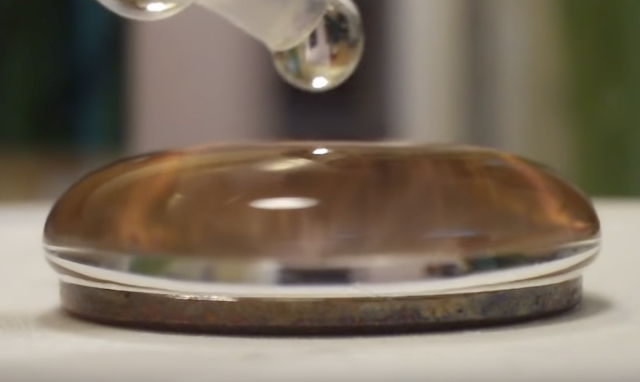 Their tiny feet resist sinking due to tiny hydrophobic microhairs, more than 1000 per millimeter.  Their ability to skate on water lies in the cohesiveness of water, the same reason that you can put 36 water drops on a penny before they run off as seen here on Youtube.  This creates surface tension, the same reason that it hurts to do a belly flop into a pool.  You can see it in action in this BBC Clip.

Danger comes from above and below.  When they sense movement below the surface from a predatory fish or backswimmer, they can jump up, putting even more pressure on the surface tension.

Females have anatomical adaptations to resist an insistent male's advances but he may hang on anyway as in this video.  A male will mount and if she resists his advances will blackmail her by beginning to tap the water to attract predators until she yields. Discover Magazine

Now add on the weight of a mating male on her back and that puts the female even more at risk.  Surprisingly females can actually learn to jump with the new load.  Scientists have reported in Nature.com that they actually added weights onto water striders.  With time and practice females learned to jump with the load, using a slightly different technique.  Even more interesting, that is something that the weighted males in the study never learned.  My editor-wife doesn't find that surprising.