Cranefly - Not a Mosquito 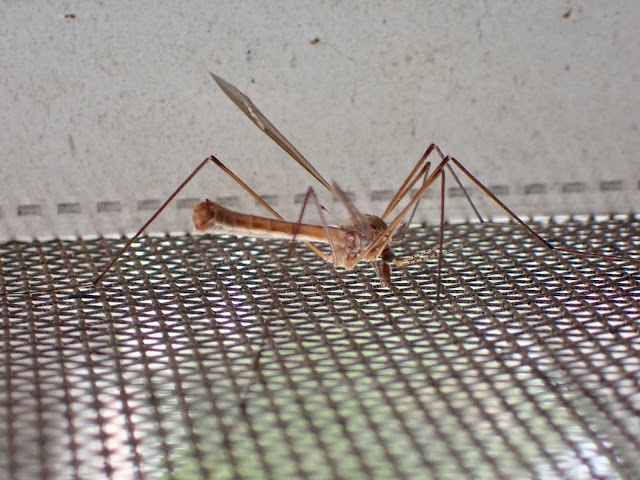 We found this crane fly clinging on the screen door.  I was able to get in in a bug box, unfortunately giving it a below the left knee amputation in the process.  After 30 minutes in the refrigerator it was ready to pose for pictures.  The photos below sent to iNaturalist got us to the subgenus Platytipula but no further.  Worldwide there over a thousand species in the fly family Tipulidae so I stopped here.

Crane flies and hangingflies are similar at first glance as both have extremely long legs and tend to be found hanging on plants.  They are easily separated as crane flies have only one set of wings like all the other true flies or Diptera.  Hangingflies are in the order of Mecoptera (aka scorpionflies) and have two sets of wings.  Diptera species replace their second set of wings with tiny halteres, the little appendages with knobs at the tip that you see behind the wings.  Wikipedia describes them below:

"Halteres oscillate rapidly along with the wings and operate like vibrating structure gyroscopes:[2] any rotation of the plane of oscillation causes a force on the vibrating halteres by the Coriolis effect. The insect detects this force with sensory organs called campaniform sensilla and chordotonal organs located at the base of the halteres[2] and uses this information to interpret and correct its position in space. Halteres provide rapid feedback to the wing-steering muscles,[3] as well as to the muscles responsible for stabilizing the head.[4]" 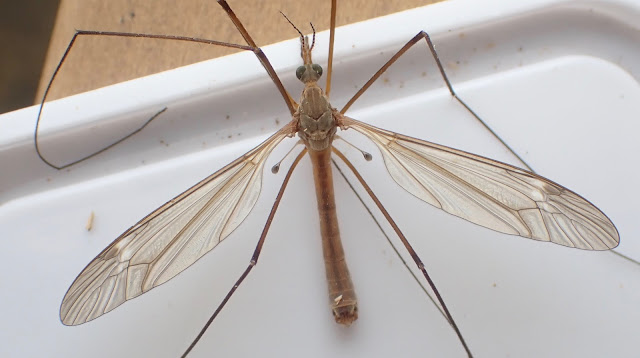 Female Tipula have a pointed ovipositor at the end of the abdomen that looks like a stinger.  This is used to push their eggs into the soil.  Males have a blunt swollen end segment like ours here.  Like many other flying insects, they spend most of their life as eggs or larvae, rising into the air for a few days, just long enough to mate and reproduce.

Crane flies are sometimes called mosquito hawks or daddy longlegs.  The internet has lots of links by people confusing them with giant mosquitoes or even suggesting that they eat mosquitoes (they don't).   Adults feed on nectar while their larvae live on decaying wood and vegetation.  This can include the roots of turf grass, leaving some brown patches in an otherwise "perfect lawn."  Pesticide spraying kills a lot of beneficial insects and pollinators so we would suggest just relaxing and enjoying the dainty visitors.