This beauty is a Chocolate Tube Slime Mold, Stemonitis splendens, captured by Becky Swearingen on the wooden steps outside her patio.  Wikipedia says:

"Slime mold or slime mould is an informal name given to several kinds of unrelated eukaryotic organisms that can live freely as single cells, but can also aggregate together to form multicellular reproductive structures. Slime molds were formerly classified as fungi but are no longer considered part of that kingdom.[1] Although not forming a single monophyletic clade, they are grouped within the paraphyletic group, kingdom Protista."

CTSM is found on rotting material, normally spreading on the forest floor but is frequently described around houses and even clogged air conditioners.

"Slime molds form structures called plasmodia which are naked (i.e. without cell walls) masses of protoplasm which can move and engulf particles of food in an amoeboid manner.  Slime mold plasmodia creep about over the surfaces of materials, engulfing bacteria, spores of fungi and plants, protozoa and particles of nonliving organic matter.  At some point plasmodia convert into spore-bearing structures, in this case into a clustered mass of stalked sporangia."   Messiah.edu

When stressful conditions such as our current heat and humidity occur, they form fruiting bodies, tubes to release spores into the air.  You can see Becky stroke the sporangia to release the spores in a video below.

The food chain continues as it always does in nature:

Look carefully at her photograph below to see CTSM's specialized predator. 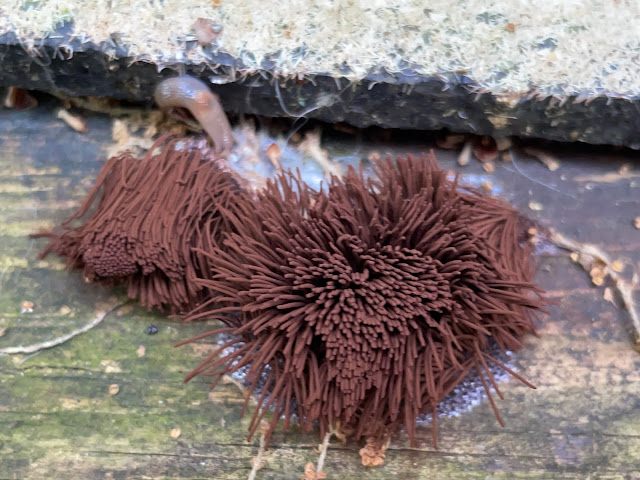 Did you find the predator?

"When the fruit bodies consist of milky white sporangia, they are a favored food source for Philomycus slugs (mantleslugs), such as P. carolinianus  and P. flexuolaris.  The slugs emerge at night from under flaps of bark and migrate to more exposed areas at the top of wet logs, bypassing more mature, pigmented fruit bodies for the younger white ones.  The slugs eat the sporangia stalks from the top down.  The feeding preference of Philomcus slugs for immature white sporangia is not seen in other slug species."  Wilimili.com

You can watch a slug chewing away at the slime mold below the fruiting bodies which are not to their taste in Becky's video.   You can also watch Stemonitis grow on this video by Chris Barnhart.

Philomycus slugs use "love darts" in their mating.  This is a family friendly blog but you can read about them at this Wikipedia link.