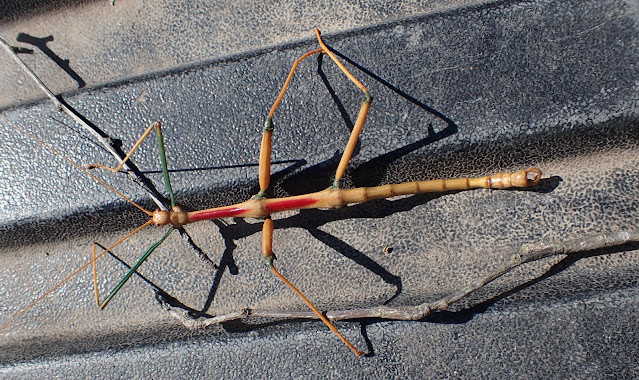 I found this stick insect in the bed of my truck after emptying a load of cut branches.  This is a giant walkingstick,  Megaphasma denticrus, quite distinctive in coloration.  This is the longest insect in North America, reaching up to seven inches long.

It had a rough day and was missing one leg but that didn't keep it from climbing onto my hand and start heading upward, the only direction most stick insects want to go.  During the day they cling to the tree, sometimes swaying a little like a small branch.  Their defense is to drop to the ground and they are light enough to survive the fall.  Then they immediately start to climb up for food and shelter.  M. dentricrus adult's favorite food is oak and grapevine leaves. 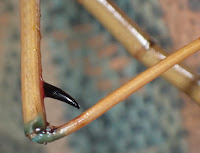 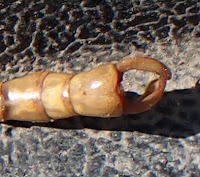 This specimen is a male, defined by a large, single spine on the underside of its mid and hind femora, the first leg segment like our femur.  Another distinctive male feature is the clasper at the end of its body.

Males tend to be smaller and far fewer than females.  The copulation consists of the male using his clasper to hang on to the female's genitalia, fertilizing the eggs as they come out and immediately drop to down to the forest floor.  The male may hang on for several days, eating during this time.

The female may produce 150 eggs with three eggs per hour.  Her ovipositor has a small flipper which propels them randomly, ensuring that they are scattered and less likely to compete for vegetation.  (See ADW)

The young offspring feed on grass and leaves, particularly oaks and grapevine.  They will go through four to five molts before achieving sexual maturity.  This species is known to regenerate a missing limb but in this case I wasn't able to raise it long enough to make it to the WOLF School alive.  I think it died of a lonely heart, never having reached its biological imperative. 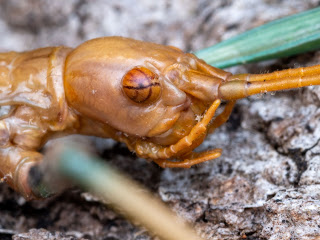