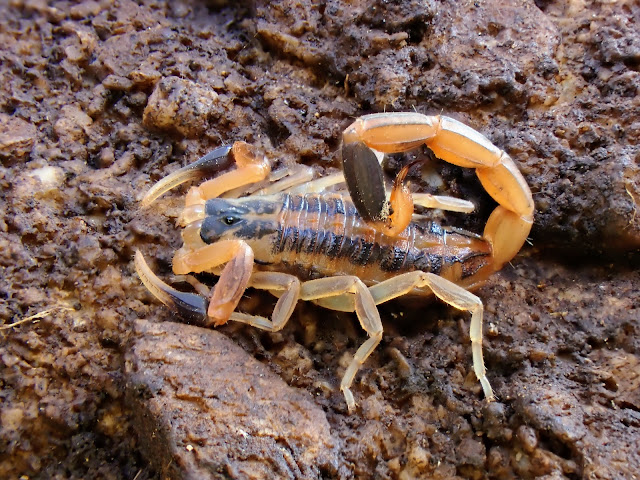 This is a vicarious two-part digital field trip to Rocky Barrens Conservation Area with Kevin Firth and Chris Barnhart.  This find led me and the WOLFs on a deep dive.

They photographed this cute little creature which has the typical features of a scorpion, immediately recognizable to most of us who have never seen one in the wild.  It has a long tail with a stinger curved over the body and large pincers in front like a beached crayfish.

This is a striped bark scorpion, Centruroides vittatus, the most common and widely distributed scorpion species in the US.  MDC says "This is the only species of scorpion in Missouri. It occurs in glades and other dry, warm, rocky areas, and sometimes in buildings and shelters and under piles of wood, brush, or garbage."

Scorpions are arachnids like the ever popular spiders, ticks and mites.They all have an exoskeleton and 8 legs unlike the insects' 6 legs.  They also have a pair of chelicerae for feeding and defense and a pair of multipurpose pedipalps.

They consume soft-bodied prey such as spiders, cockroaches, ants, crickets, beetles, and butterflies. Grabbing the prey with their pincers, they sometimes use their stinger to subdue it. 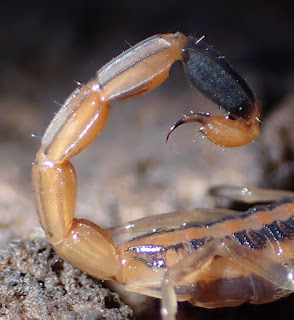 The tail and stinger was familiar to me from childhood where every cowboy worth his saddle would encounter them in the movie westerns.  Although they had a deadly reputation on film only 25 of the 2,500 known species have venom capable of killing a human.  Usually a sting is mild although allergic reactions can cause more severe problems.  Mexico on the other hand is one of the most affected countries, with the highest biodiversity of scorpions in the world, some 200,000 envenomations per year and at least 300 deaths.*

I enjoy Fun Facts just like my 5th grade WOLF School colleagues.  Here are a few:

Thanks to Kevin and Chris for the glade trip.  We hope to tag along again sometime.