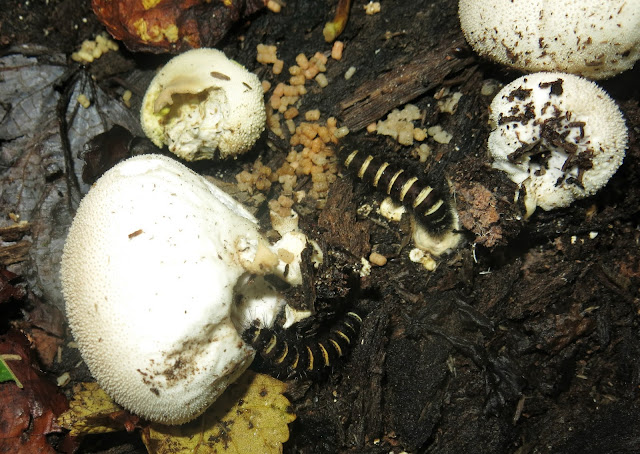 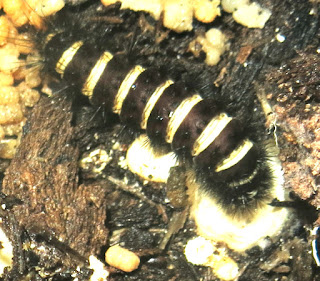 Mark Bower sent this photograph of a caterpillar eating a fungus.  It turns out that this is a moth larva that eats not only its veggies but also some mushrooms on the side!  Zooming in close, it is quite distinctive and INaturalist easily identified as an Agreeable Tiger Moth,  Spilosoma congrua.  Mark said:

"These are my only pictures so far. The first one is how I found them before I disturbed them. The mushrooms are Lycoperdon pyriforme, the Stump Puffball. I have them in a container on the kitchen counter and as the mushrooms decompose they are creating an unpleasant odor. Not sure I want to keep them."

Even my ever-patient editor Barb would draw the line at their kitchen counter resident.

Common sources say the larvae are general feeders on a variety of herbaceous plants, including dandelion (Taraxacum spp.), plantain (Plantago spp.), and pigweed (Amaranthus spp.)  It took a much deeper dive to come up with this resource which documented the fungivorous habit of this species.

Unlike a fungivore like myself, they prefer theirs raw.  If the photos that Mark sent tend to turn you off, I would suggest you stick to the picture of the moth.....and avoid his kitchen cabinet.