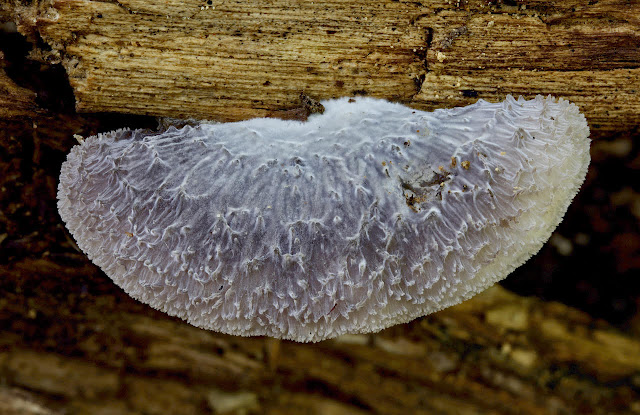 Mark Bower found this rare mushroom on the trail behind our cabin, reported to have been only seen by 10% of mycologists. He said this about it:

"It is Hohenbuehelia mastrucata, the wooly oyster, probably my favorite mushroom. The genus was named after the Austrian mycologist and poet Baron Ludwig Samuel Joseph David Alexander Freiherr von Hohenbühel Heufler zu Rasen und Perdonegg (1817-1885). Thankfully only a part of his name was used. The specific epithet means “wearing sheepskin” and refers to the “wooly” appearance of the cap surface."

It is found during summer and fall, decomposing well-rotted hardwood logs, and has a particular affinity for maples. The cap is gray, with brownish areas, and is adorned with gelatinous spines. Now here is where it gets really interesting.

This genus is nematophagous (nematode/worm-eating). While dead wood is a good source of carbon, it doesn't have enough nitrogen which the fungi need to make proteins. Mark describes it thus:


"It is one of the many carnivorous fungi. It is capable of killing and digesting nematodes, which provide a great nitrogen supplement. Its normal substrate, rotting hardwood, has a very low nitrogen content.

This species has hour glass-shaped “adhesive knobs” on its hyphae. When a nematode comes into contact with a knob, it sticks to it. The fungus then directs other hyphae to enter the nematode’s mouth and anus. It then exudes enzymes which kill and digest the poor worm from within."

Forestfloornarrative.com goes on to say:  "Like several other species in the Pleurotaceae, the woolly oyster is nematophagous. Unsuspecting nematodes squirming around in dead broadleaf trees come in contact with sticky traps made out of fungal conidia. There’s a diverse array of fungal structures that evolved to trap nematodes, including hyphal nets, constricting lassos, and the sticky knobs H. mastrucata creates. Once the nematode is stuck in place, mycelial strands penetrate the organism, and exude enzymes that break down nematode tissue from the inside-out. The nitrogen rich slurry then becomes absorbed by the fungus."