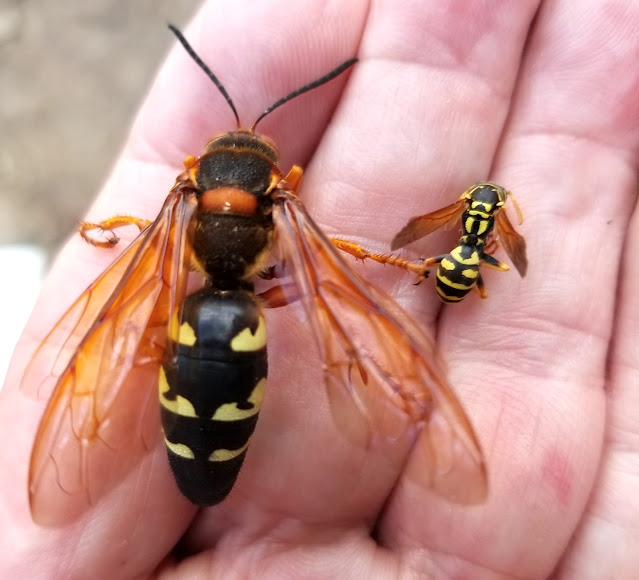 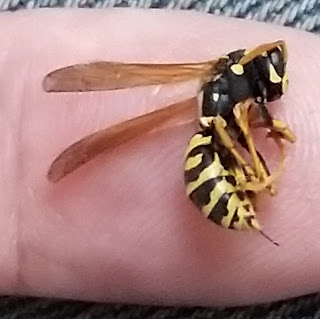 It was yellow wasp day in Springfield.  We started the day with the little one on the right.  Barb had seen them flying into a small construction hole in a rain barrel.  My first thought was yellow jackets but it looked a little small and they almost always nest underground.  I carefully caught one and chilled it in the refrigerator.  Once I could get better photographs I could compare it with yellow jacket specimens.

The Polistes dominula is a docile species and will only sting if you disturb their nests, unlike the yellow jackets we discussed in a previous blog.  They are an invasive species but not a big problem.  They have a lek based mating system where the females in the nest may mate with various males promiscuously so that 35% of the nest are unrelated.  (They are European you know!)

While I was identifying my specimen I heard a buzzing around some of Barb's native plants on the deck and saw a big yellow wasp slowly buzzing around the sunflower heads.  I wasn't able to photograph it on the wing and finally resorted to netting it and then very carefully transferring it in to a bug box for chilling. 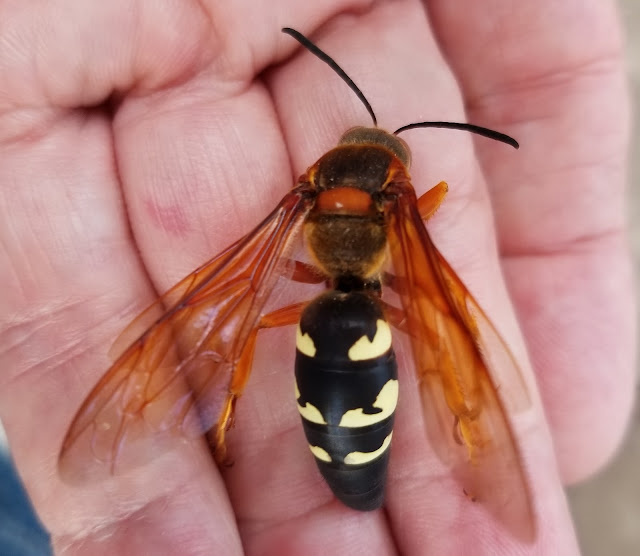 My first guess was right, this was the famous cicada killer, Spheseus speciosus.  You can watch this entertaining dramatic video on them on YouTube that I would recommend for fun.  MDC has a more scientific approach here.  They are scary in flight but relatively harmless, never aggressive unless you grab one or step barefooted on them at their nest opening on the ground.  The males bang into each other in competition for females but their pointed end is all a bluff.  Only the females can sting you.

"Females emerge and dig nest tunnels; then they hunt, sting, and paralyze cicadas, transport them to the nest, drag them inside, and lay an egg on them. The larvae hatch in a few days and start eating the cicadas. Within a month, they finish growing, form a protective cocoon, and overwinter. In spring they pupate for about a month, then emerge as adults."

Not all wasps are harmful and even the paper wasps just want to be left alone to hunt spiders and other insects for their babies.  Avoid unnecessary insecticides unless they are where you can't avoid them.